Remember, if you want to get the detail now on everything the new release offers, download the What's New in MongoDB 3.4 white paper.

MongoDB provides horizontal scale-out for databases by partitioning data across low cost, commodity hardware using a technique called sharding. While many NoSQL databases also offer scale-out designs, MongoDB uniquely supports multiple sharding policies that give administrators precise control over how data is distributed across a cluster. As a result, data can be sharded according to query patterns or environmental considerations, providing higher scalability over diverse workloads and deployment architectures: 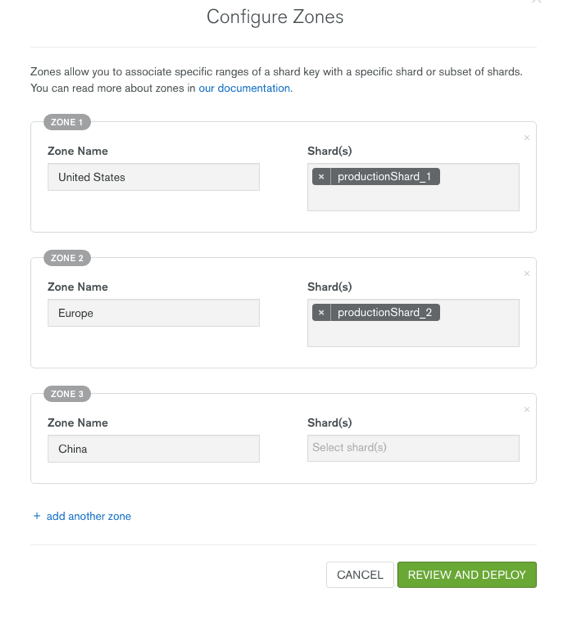 The most popular use cases for MongoDB zones include the following, along with links to tutorials demonstrating how to configure zones for each deployment pattern:

Many modern workloads have unpredictable performance and capacity demands. Loads can quickly spike in response to specific events, and then stabilize to regular levels. Responding to such dynamic workloads requires elastic database clusters that allow for capacity to be seamlessly added and removed on demand. This allows the business to get the scalability it needs, when it needs it, and can then reduce resources when demand drops, thus avoiding over provisioning and containing costs. MongoDB 3.4 adds a range of enhancements to further support elastic clusters.

The MongoDB sharded cluster balancer, responsible for evenly distributing data across the nodes of a cluster, has been improved, allowing users to scale capacity quickly and easily with minimal operational overhead.

The balancer process now supports parallel data migrations. Multiple node pairs can perform balancing migrations simultaneously, significantly improving balancing throughput as nodes are added or removed from the cluster, or as data is redistributed across nodes. An individual node can be involved in at most one migration at a time, so the benefits of parallelized balancing will be observed in clusters with four or more shards. In addition, with WiredTiger as the default MongoDB storage engine, balancer throttling that was necessary with the earlier MMAP engine is now off by default, which dramatically speeds migrations, by as much as 10x in some deployments.

Adding new replica set members to a MongoDB cluster has also been improved with an optimized “initial sync” process. Initial sync is implemented by copying all data from an existing replica to the newly added replica member. Initial sync is typically used when adding nodes to a cluster, migrating to a new MongoDB storage engine, or restoring a node that has fallen too far behind the replication process. MongoDB 3.4 offers the following enhancements to initial sync:

As a distributed database, MongoDB relies on efficient network transport during query routing and inter-node replication. MongoDB 3.4 introduces a new option to compress the wire protocol used for intra-cluster communications. Based on the snappy compression algorithm, network traffic can be compressed by up to 70%, providing major performance benefits in bandwidth-constrained environments, and reduced networking costs. One early access tester was able to reduce its networking bill by over $20,000 a month after configuring network compression.

MongoDB 3.4 adds a new readConcern level of “linearizable”. This option confirms the primary replica is still connected to a quorum (majority) of replica nodes before returning results to the client. When used to perform reads against a single document, linearizable read concern provides two guarantees:

In order to provide the extra guarantees, using linearizable read concern level will have a significant impact on read latency.

As MongoDB adoption accelerates, there has been growing demand to run the database on a more diverse range of platforms to support a broader set of use-cases:

All of these new ports are available from the MongoDB download center.

MongoDB 3.4 extends existing support for authenticating users via LDAP to now include LDAP authorization as well. This enables existing user privileges stored in the LDAP server to be mapped to MongoDB roles, without users having to be recreated in MongoDB itself. When configured with an LDAP server for authorization, MongoDB 3.4 will allow user authentication via LDAP, Active Directory, Kerberos, or X.509 without requiring local user documents in the $external database. When a user successfully authenticates, MongoDB will perform a query against the LDAP server to retrieve all groups the LDAP user is a member of, and will transform those groups into their equivalent MongoDB roles.

MongoDB 3.4 now leverages native platform libraries to integrate with LDAP. This removes the need for the external sasld dependencies and configuration required in earlier releases, while also adding support for LDAP when running MongoDB on Windows. In addition, LDAP authentication and authorization can now be configured in Ops Manager, rather than separately via the command line on each MongoDB node.

You can learn more about the  from the documentation. MongoDB Enterprise Advanced is required to take advantage of LDAP integration.

New in MongoDB 3.4, DBAs can define non-materialized views that expose only a subset of data from an underlying collection, i.e. a view that filters out specific fields, such as Personally Identifiable Information (PII) from sales data or health records, or filter out entire documents, such as customers who have opted out of marketing communications. As a result, risks of data exposure are dramatically reduced. DBAs can define a view of a collection that's generated from an aggregation over another collection(s) or view. Permissions granted against the view are specified separately from permissions granted to the underlying collection(s). This capability allows organizations to more easily meet compliance standards in regulated industries by restricting access to sensitive data, without creating the silos that emerge when data has to be broken apart to reflect different access privileges.

Views can also contain computed fields – for example summarizing total and average order value per region, without exposing underlying customer data. All of this can be done without impacting the structure or content of the original source collections. Developers and DBAs can modify the underlying collection’s schema without impacting applications using the view.

As views are non-materialized, the view data is generated dynamically by reading from the underlying collections when a user queries the view. This reduces data duplication in the database, and eliminates inconsistencies between the base data and view.

Views are defined using the standard MongoDB Query Language and aggregation pipeline. They allow the inclusion or exclusion of fields, masking of field values, filtering, schema transformation, grouping, sorting, limiting, and joining of data using $lookup and $graphLookup to another collection.

You can learn more about MongoDB read-only views from the documentation.

That wraps up the second part of our three-part blog series. Remember, you can get the detail now on everything packed into the new release by downloading the What’s New in MongoDB 3.4 white paper.