disclaimer: i do not work for oracle or represent oracle in any way. this list of features is not official. this is just part of my research as an “outsider”.

java 8 has become feature complete about two months ago and the developer preview is just around the corner (in a couple week’s time). this blog post will detail what’s coming in this next major release with an emphasis on javafx 8, which is the ui library. javafx release number is now on par with the java release, that’s why it has jumped from 2.2 to 8.

this is part i of a three part series of posts. this first part will focus on what oracle has officially been telling developers that should come out in javafx 8, the second part will be mostly speculative, and listing what i think might come out and is not officially being reported.  and the final part focuses on the rest that’s coming to java 8, excluding the ui library (e.g., new language features and such).

the original schedule aimed to ship the release in early september 2013, but due to the recent focus on browser-related security issues that date was not achieved. the new schedule is as follows:

all features have been implemented and integrated into the master forest, together with unit tests.

a reasonably stable build suitable for broad testing by the developer community is published. this build will include all planned features unless otherwise stated.

final release, ready for production use.

to this let me add that i’ve been developing java based apps under java 8 for more than a month now and consider it to be quite stable. i’m also not using any of the features under development (like 3d graphics for example), so i can’t say anything for that part.

you can already get an early access release of jdk8 here: http://jdk8.java.net/download.html

on that site you can also download some sample apps, where you can get a glimpse of what’s already possible to do. 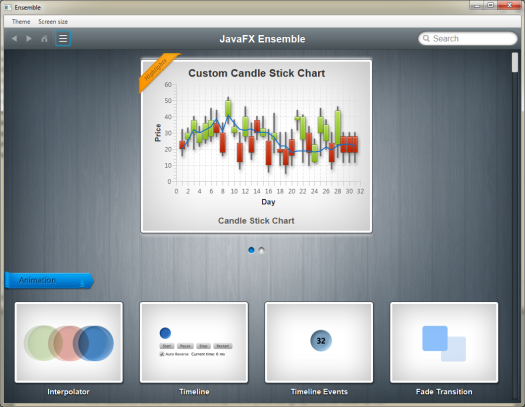 the following list will focus especially on the most relevant upcoming features. the list of all coming new features and changes to existing ones is particularly big in this release and it could be that some relevant ones might have escaped my attention and may not me mentioned.

rich text support will be added in javafx 8 via textflow class.

this will allow you to:

for more details visit this links:

swing node will allow you to embed swing components inside a javafx scene. support for the opposite, that is, embedding a javafx scene inside a swing app is already possible via jfxpanel.

for the api specification and a simple example visit: http://download.java.net/jdk8/jfxdocs/javafx/embed/swing/swingnode.html

changes to the controls api

several changes will occur to the controls api, this is especially important to third party control providers:

skinbase class will become public, but behavior class and subclasses are still private implementation, there is still some work to be done here after javafx 8.

support for video and audio recording will be added.

you can watch this video presentation for more details (jump to minute 39 to see an example app in action): http://www.youtube.com/watch?v=japubzfjx2a

printing support will be added to javafx. you can check this detailed blog post by carl dea for more details: http://carlfx.wordpress.com/2013/07/15/introduction-by-example-javafx-8-printing/ 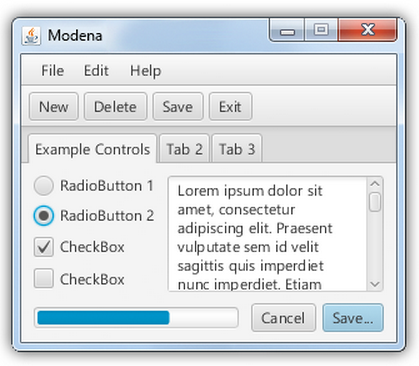 the looks have been significantly improved with a new theme called modena. this time a lot developer feedback was taken into account making for a very nice end result.

more details can be found here:

javafx 8 will have a datepicker and a treetable control: 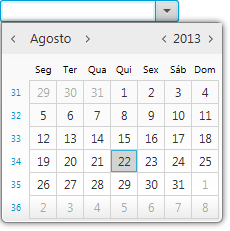 the following enhancements were added to webview:

nashorn’s goal is to implement a lightweight high-performance javascript runtime in java with a native jvm. this project intends to enable java developers embedding of javascript in java applications and to develop free standing javascript applications. (more on this on a later post).

javafx will be included in oracle’s java se embedded 8. it will include a subset of features of the desktop version, namely it will not include:

for media there is a workaround however, as this comment in fxexperience from jasper potts explains:

“there is no javafx media support on pi, we prototyped passing
hardware decoded frames of video into opengl so that it could be drawn
in javafx scene but performance was not great. so what we do is draw
javafx with a transparent background just like a transparent window on
desktop. then use the native omx media player to play video to a lower
layer under the javafx graphics. so basically standard hardware overlay
graphics. this works great on pi and there is only about a 10% drop in
javafx performance when playing a hd video stream underneath. so simple
animations we can get 50+ fps with video at same time.”

improved 3d support will be available in this release. or it’s probably more accurate to say: true 3d support.

it is an optional feature, you can query the runtime to know whether it is available for the given platform. when javafx runs with software rendering this 3d features will not be available.

camera can be added to a scenegraph, its position and aim (or orientation) is set using standard transforms.

subscene is a special node that can be used to render part of a scene with a different camera.

material specifies the appearance of a 3d shape. light interacts with the geometry of a shape3d and its material to provide the rendering result.

a shape 3d can be rendered either as a filled shape or as a wireframe.

ambientlight : a light source that affects all objects equally. ambientlight objects model the light reflected from other visual objects. if you look up at the underside of your desk, you will see the bottom surface of the desk although no light source is directly shining on that surface (unless you have a lamp under your desk). the light shining up on the bottom surface of the desk reflected off the floor and other objects. in natural environments with many objects, light reflects off many objects to provide ambient light. the ambientlight class simulates this effect.

pointlight : a light source with a position. the distance and direction to a given object affects how this lights up the object. pointlight objects approximate bare light bulbs, candles, or other light sources without reflectors or lenses.

may add more types of lights in the future (example: spot light, a light that simulates light sources such as flash lights).

if a parent is in the set, all its children are affected. the default is the root node of the scene.

lod stands for level of detail. it is technique that changes the appearance of an object depending on how close or distant to the camera it is, or in other words the level of detail is changed according to the area occupied by the object if the object is far then the detail can be lowered without the user noticing it, and thus improving performance.

many 3d file formats exist, such as:  obj, maya, 3d studio max, collada, krml. there will be no official 3d file format loaders shipping with the api. oracle however will provide sample code for one or two popular formats. at least a collada file loader is in the works.

other minor features, tweaks and changes

builders are now deprecated in this release. in java 9 they will be removed (this is several years down the road). you should start planning to replace builders if you are using them.

due to an implementation detail, builders would stop working in java 8 unless some binary incompatibilities were introduced. because of that the decision was to phase out the builders, the changes that were required would reduce the value of the builders to the point where they just wouldn’t be worth it, and when considering mobile / embedded use cases, the extra cost of the builders would be prohibitive. ( http://mail.openjdk.java.net/pipermail/openjfx-dev/2013-march/006725.html )

javafx thread and swing will merge

javafx thread and swing can be merged, this is still an experimental api and will not be public, and you’ll have to turn it on explicitly. if you are developing a hybrid swing/javafx app this will simplify the code since you only have to worry about one ui thread.

you can read more about this in this blog post:

javafx has just recently become fully open sourced . this is great news since it will allow third parties and developers to extend the functionality of javafx more easily and thoroughly. also good for debugging errors, and other things.

javafx on the default classpath

this has been a recurring request from developers, javafx classes are now on the default runtime classpath for an oracle java implementation.