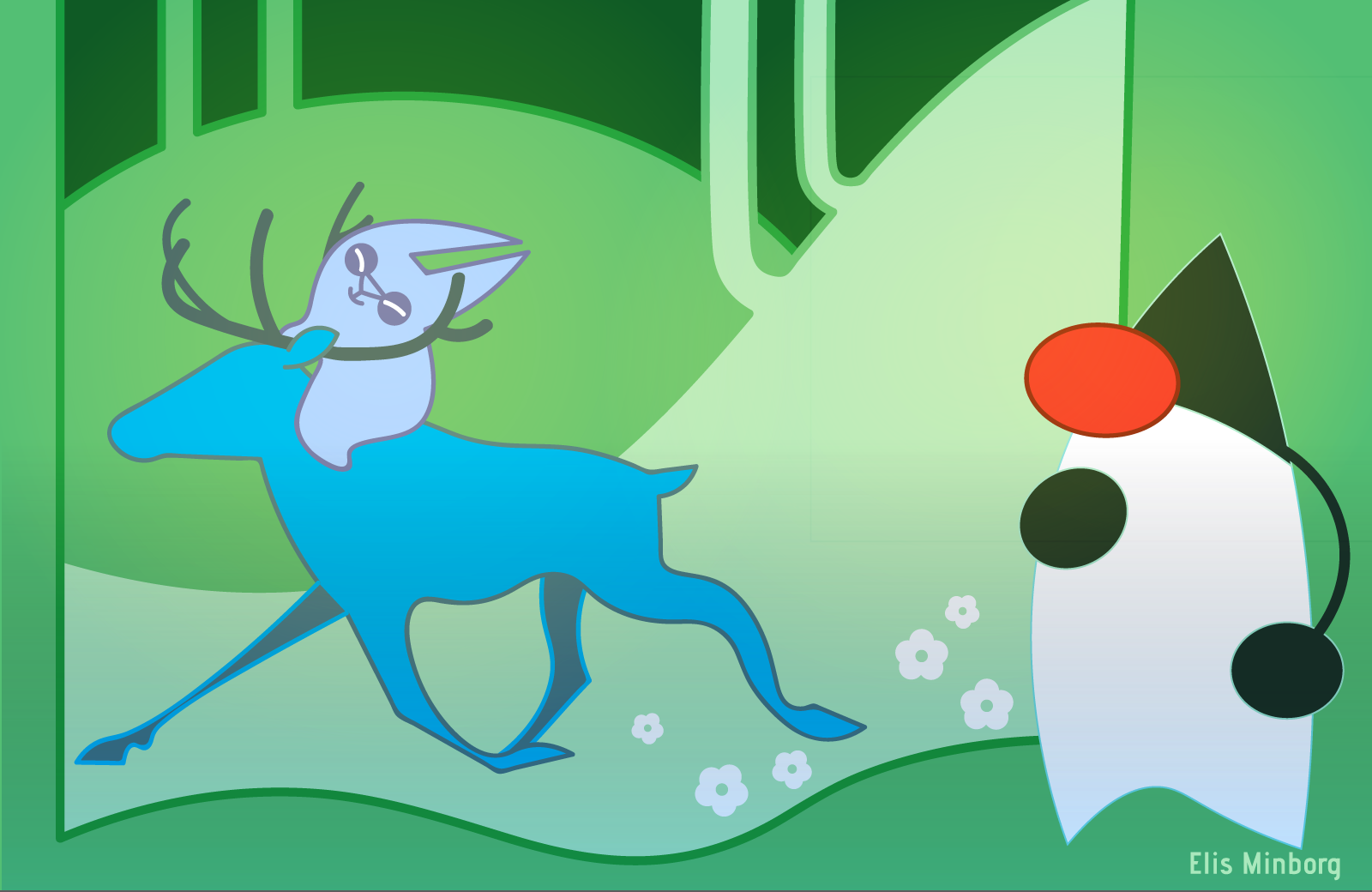 The Java Duke, Vaadin Reindeer and Speedment Hare Spire — a picture by Elis Minborg, inspired by a John Bauer

Coming from a software development background mainly rooted in Java, I have spent roughly two years away from the Java world, exploring the wonderful aspects of embedded system design in the automotive industry. Taking on new challenges yet again related to Java is a cognitive homecoming of sorts for me while the spatial aspects of the new job initially entail transatlantic commuting. My first California visit for the new job at Speedment Inc luckily coincided with the JavaOne 2016 conference in San Francisco.

The story that you are about to read is about one particular encounter at this for me very inspiring event. You will learn about Hares and Reindeer, Nordic cooperation at its finest, and a perfect match of frameworks creating an inspiringly elegant hello world web application rendering data from a relational database in a browser.

TL;DR: Jump directly down in case you don't want to indulge in the full narrative.

JavaOne 2016: Keeping the Promises of Conferences Past

At the conference JFocus in 2013, there was a consensus that Java felt dated when compared to more modern languages, such as Scala and Groovy, and suffered from a somewhat deserved lack of enthusiastic backing. The upcoming Java 8 promised great progress, however, and it was repeatedly stressed that the future for Java looked brighter than the recent past, as the new concepts of streams and lambdas would modernize the language.

Having watched the progress from a certain distance — the automotive industry has a way of absorbing one's attention — it was a delight to be back, in 2016, to what seemed quite similar to the bright future pictured a few years ago. The future progress promised in 2013 had not only materialized but also been widely embraced. The functional paradigm of Java 8 lambdas and streams had not been received as just a facelift, but as the fundamental game-changer they actually are.

Attending a big conference when just having started a new job is a great way of getting a feel for the general direction of the industry and the way the product of the company is received. An inspiring and greatly informative quick start, participating in such a major congregation immediately tells what parts of our product actually pique others' interest and what kind of questions arise during follow-up discussions.

I learned from several enthusiastic exchanges that Speedment bringing Java 8-style functional programming to the realm of relational databases was the key factor that caught others' attention.

An Inspiring Meeting: Vaadin and Speedment

The most inspiring interaction was probably with UI framework designers Vaadin. Creating a framework that can be described as AWT/Swing for the web done right, Vaadin brings elegant programming of web interfaces to Java. Delivering relational data to Java in a way very similar to what Vaadin expects as input, Speedment seems, at first glance, to be the perfect match with Vaadin, and together the two frameworks could, in theory, bring relational data to the web, allowing minimal boilerplate business logic in between.

Capturing the spirit of the meeting the graphic illustration of this blog post is inspired by painter John Bauer and pictures a reindeer and a hare working together. With its roots in Finland, Vaadin has a reindeer mascot. Speedment has a Swedish heritage and uses a hare for its mascot.

Nordic people may not be known for overly expressive outbursts of enthusiasm, but I believe that I displayed my excitement with an average of more than one positive word per sentence and an occasional smirk that may have resembled a smile. Thus expressing profound enthusiasm (bordering the socially acceptable in my home country) about the promising outlook, we decided to try it out. What about trying to get Vaadin and Speedment work together, right then and there, at the exhibition hall of the conference?

Of course, many times, what at first seems like a great idea somehow does not handle the meeting with reality very well. General discussions in the abstract world of concepts quite often reveal overlapping or matching ideas that implicate great synergies, only to let one down when further explored. This is quite natural for at least two reasons:

Despite knowing all that, setting out to create running code right there on the exhibition floor seemed like a fun exercise. Sure, it was probably doomed to run into some obstacle, no matter how clean and perfect the match initially seemed, but it would still be fun.

It would turn out that the expected obstacles never materialized.

Granting myself some philosophical leeway, I submit to the reader that many great things that are considered to be invented are actually rather discovered. Instead of being born as the result of a creative process, they were, in some ontological sense, present all the time, just waiting to be found. I would say that the application that emerged in my laptop while the bright minds of Vaadin and Speedment contributed to each part of the solution was the result of the two frameworks being cleverly designed, rather than an inspired act of invention in that busy exhibition hall.

After some 10 minutes of coding no more than standard instructions of the respective framework, the browser of my laptop rendered data from a table of an SQL database. The data was delivered by Speedment, manipulated in straightforward Java 8 code with minimal boilerplate, and then sent to Vaadin for rendering.

One reason that this application worked more or less out of the box is that Vaadin and Speedment agree on using standard Java constructs in their interfaces. Had there been any special constructs used for any of the frameworks, the code would be bloated with adapting boilerplate.

For the toy example, we started out with one of our example databases. The table of interest in this example is a table of hares that have names, colors, and ages.

The business logic of our toy example is minimal. The following declarative code describes filtering out hares that have ages above 3 and collecting them in a list. The Speedment framework has an API founded in Java 8 streams, a fact that was the major cause of excitement when describing Speedment to people I met at JavaOne. For further reading on that topic, please see this previous blog post.

The first line starts the description of an operation pipeline operating on a stream of hares from the database, and the second line adds a filter to the pipeline telling Speedment to find hares of the desired age. The last line terminates the pipeline, defining the result as a list of the filtered hares.

Having a list of beans, a table of the Vaadin framework can be populated by the following piece of code.

The code shown so far is all the business logic code needed to get a live view of the database content in the browser. Asking the database for the contents, we happen to find four hares.

Our business logic, described above, filters out the hares with ages strictly greater than 3, yielding two lines of the table presented in the browser.

A promising feature for a future blog post about Vaadin and Speedment is the lazy loading of MTables. It seems quite straightforward and probably interacts nicely with Speedment, creating streams of data instead of a fully instantiated list.

The upcoming Vaadin 8 API promises to take Java 8 support to a higher level. See, for example, this blog post. I look forward to exploring how this may enable even more elegant Speedment Vaadin interaction.

I thoroughly enjoyed being there to see this application appear on my screen. It gave me some insight into the Vaadin framework, and I took away some new knowledge of how to give a quick visual presentation of the power of the Speedment framework. For a backend tool provider, demonstrating end user value is often an indirect exercise. To show a relevant example of how to use our tool, we need to add some frontend presentation, and Vaadin is a great match for doing so in the future.

The two frameworks seamlessly interacting to create a solution to a toy representation of a real use case, in this case, a web application using a relational database, is a sign of relevance and maturity of both frameworks.

What you have seen here is a starting point of more to come, a proof of concept if you will. Since the two frameworks complement each other so well to create a self-contained complete example, we will build on this to create more elaborate Speedment web applications using Vaadin. For a developer new to the field, it is very easy to see that the frameworks solve and abstract away the domain specifics and allows the developer of the business logic to create her application using modern standard Java code with minimal concern for boilerplate or framework specific constructs.

As described in more detail, in, for example, this blog post, Speedment allows a developer to access the relational database in a declarative way without explicitly creating SQL queries, which allows for very elegant code with low maintenance costs. The proof of concept described here shows how nicely Vaadin provides a web front end that works with Speedment out of the box.

Appendix: How to Run the Application

The code shown above is all the Java code needed for the application to run. To get the frameworks configured and running, clearly some dependencies are needed in the POM file, and the Speedment framework needs proper database credentials. The following steps will get it running by using this GitHub repository as a starting point.

Edit: Since this post was originally published, Matti Tahvonen of Vaadin has provided valuable feedback and a pull request to the git repo bringing the example code up to speed with the latest advances of Vaadin technology.