even though we're two years on from the 1.0 release of javafx, 2010 could be the defining year for the technology.  with the mobile device space really taking off, javafx has to prove that it deserves to be up there with competing technologies. while some say that it is all too little, too late, i think that javafx has one key feature that gives it a fighting chance - an application you write for javafx mobile can also work on the web or desktop.

earlier this week, i asked javalobby readers what they would develop their mobile applications with. so far, the overwhelming majority, at about 70% say they would use android. javafx comes in second at just 16%. despite the low number, i don't think all is lost but i wonder what javafx has to do to get buy in from the java community.

sun have been actively looking for feedback from javafx developers to find out what they want, it's a good start and has some interesting results. the most popular profile is the desktop, followed by the web. maybe mobile is less popular as it was released later, but with so few interested in deploying their apps using javafx for tv, is it worth releasing that profile at all?

the most important question in the survey asks the developers to rate features for future releases of javafx. it's not surprising that top of the list is to get more controls in, and that developers want better tooling. it looks like tooling is already addressed with the newly available javafx composer preview in netbeans.

i'm really looking forward to see how javafx progresses this year. we should be seeing javafx 1.3, which sounds like it will address some of the concerns around the ui controls. this slide from a presentation at devoox shows (in asterixs) what new controls will be added: 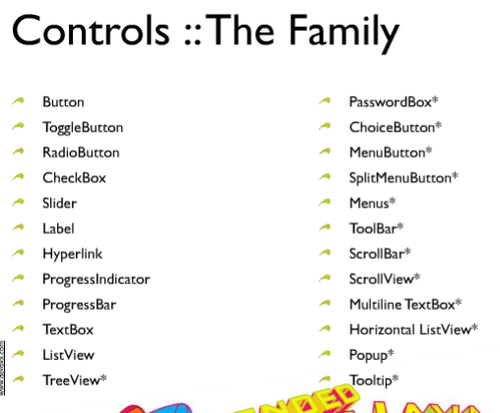 with the key developer concerns covered, i hope that the investment that has been put into javafx pays off for sun this year. for those who aren't using javafx, what would it need to have to make you change your mind? and to those who are using it, what do you feel is missing?