in singletons are pathological liars we discussed the problems of having singletons in your code. let’s build on that and answer the question “if i don’t have singletons how do i ensure there is only one instance of x and how do i get x to all of the places it is needed?”

an oo application is a graph of objects. there are three different kinds of graphs i think of when i design an application

if the new operators are mixed with application logic (see: how to think about the new operator ) then the constructor graph and the collaborator graph tend to be one and the same. however, in an application which uses dependency injection the two graphs are completely independent. lets have a closer look at our creditcardprocessor example. suppose this is our collaborator graph which we need to execute a request. 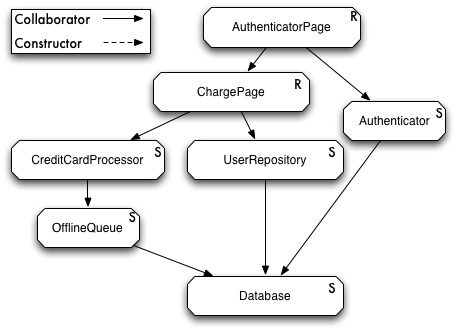 the above shows the application collaborator graph. the letter (s/r) in the corner designates object lifetime; either singleton or request scope. now, just to be clear, there is nothing wrong with having a single instance of a class. the problem arises only when the singleton is available through a global “instance” variable as in singleton.getinstance().

now, in order to have a testable codebase we have to make sure that we don’t mix the object construction with application logic. so all of the above objects should rarely call the new operator (value objects are ok). instead each of the objects above would declare its collaborators in the constructor. authenticatorpage would ask for chargepage and authenticator. chargepage would ask for creditcardprocessor and userrepository. and so on. we have moved the problem of construction elsewhere.

so now the problem is, how do we construct the graph of objects? 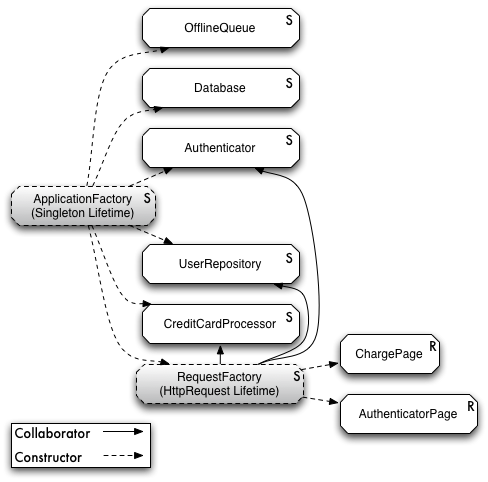