From complex databases to self-driving cars, the usage area of C and C++ languages is surprisingly wide. Even today, with a myriad of new and robust programming tools, the two coding languages from the 1970s cannot be replaced. So what are the common applications of C and C++ today and why do we still use them? Let’s find out in this article.

When are the C and C++language used?

Since C language was originally designed for system-level programming, it’s no surprise that it’s commonly used to build operating systems and firmware.

It’s close enough to the hardware layer to manipulate low-level code but also fast and energy-efficient.

These factors make it a perfect fit for OS development.

Above all, any operating system has to run fast and efficiently manage system resources. For example, Linux, Microsoft Windows, Mac OS are all written in C. As well as Android and iOS to some extent.

A-C developer can implement all the data structures himself, fine-tuning the smallest details of an operating system. Such increased flexibility makes C a commonly preferred option.

And unlike other languages, C has no runtime dependencies. This means that a program could run directly on the hardware without requiring a memory manager, input, or output layer.

C is the de-facto language when it comes to embedded systems engineering.

Mainly due to its’ high performance and ease of use. C language consumes very few memory resources. This makes the program run quickly. As a result, you can expect the embedded systems to perform in real-time with no overhead.

More so, since C code is highly portable, it is not tied to any specific microprocessor or a system. So you can compile an embedded program across various devices and platforms with little or no change at all. 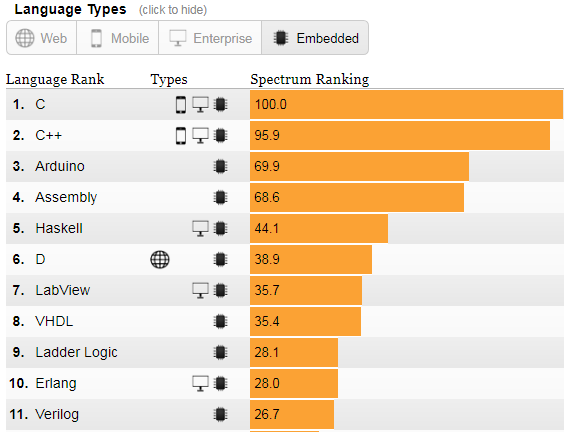 That’s why autonomous cars, smartwatches, IoT sensors, and devices like coffee machines have firmware all written in C or C++. In connected systems, C lets you work directly with the memory resources and adjust every part of the code.

Performance is critical for a game, so the choice of a programming language is limited in this field.

Since C++ is the fastest programming language for today, it turns out one of the best choices for 3D, multiplayer, or other games.

For instance, Counter-Strike, StarCraft: Brood War, Diablo I, World of Warcraft are all written in C++. Not to mention Xbox and PlayStation consoles which are based on C++ programming.

The core of the Unity game engine also used C++ development. And Unity is the most popular engine for building video games, targetting multiple OS at once.

Even the most intensive game graphics can be handled with C++ software development. It lets you optimize and adjust how exactly the game memory resources and data structures will be used. As a result, you have complete control over the game development.

C++ can be also used to build desktop applications. All thanks to its’ superior cross-platform frameworks such as Qt. It allows you to target Windows, Linux, macOS, Android, and embedded systems – all with a single codebase. So the app development with Qt turns out a great option if you want to cut the programming time & costs.

Another feature-rich library SDL lets you build for Windows, Linux, Android, macOS, and iOS at the same time.

By the way, Photoshop, Illustrator, and Adobe Premiere are all written in C++.

What are some other applications?

Facebook converted some of its’ code from PHP to C++ language to reduce the power consumption per user. Cloud storage systems, databases, device drivers, and other types of software might use C++ development.

Consider also banking and other apps with high concurrency and low latency support. Or basically, anything that has to run fast with no issues.

Taking into account all of the above, we consider C/C++ languages good choices for:

Published at DZone with permission of Andriy Shevchyk. See the original article here.