By now, everyone has seen the “test automation pyramid” a thousand times or more. You can find countless illustrations of it online. 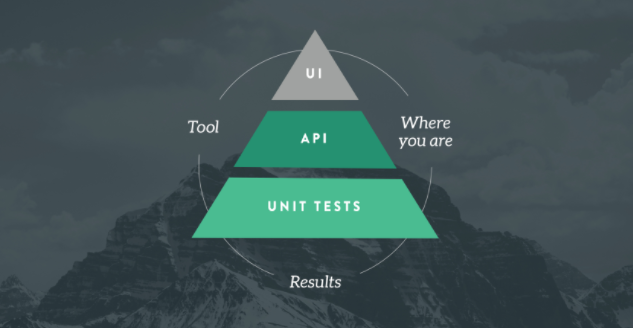 The base comprises a large number of automated checks of small scope. As we ascend, we check progressively larger chunks of code and we need relatively fewer cases than in the layer below.

The core idea is to get as much value from each check as we can with the least investment of time, money, and effort. Checks higher on the pyramid involve more resources and more interfaces than checks lower on the pyramid, so they are inherently more expensive. The more we can learn through less-expensive, lower-level checks, the better off we are.

When working with organizations that are only now beginning to fill the gaps in test automation, there’s always a lot of discussion about tools. There’s a tendency for people to want to avoid throwing numerous different tools into the mix, as that will make the environment harder to understand and maintain, and increase the chances that Thing One won’t work properly alongside Thing Two.

That’s sound thinking, but it can be taken beyond the point of diminishing returns. In the context of automated checking, different tools may provide the best results depending on where we are on the pyramid.

All the illustrations of the pyramid that I’ve seen so far show “unit tests” at the base. With contemporary development practices, the base is really even smaller than that; it’s microtests.

Microtests are written and maintained by programmers. They are the basis of test-driven development (TDD). A single example will exercise just one logical path through just one very small-scale unit of code. In order to do this, the example has to be written in the same language as the code under test. (It’s possible someone has created a low-level testing tool that contradicts that statement, but as a general rule it’s the reality on the ground.)

So, if you had some C# code like this:

then you would want to have a microtest for each logical path through the method, IsPrime. Maybe something like this:

Similarly, if you had some COBOL code to determine the next invoice date, like this:

then you would want one microtest for each logical path through the paragraph, 2000-NEXT-INVOICE-DATE. Maybe something like this:

A point to take from these examples is that when we need to isolate a small section of a unit of code, exercise just that section, and make assertions about the behavior that section exhibits in isolation from the rest of the code, then we have to write our automated checks in the same language as the code under test. A Python or Ruby program can’t directly look at the result of a C# method or a COBOL paragraph. A testing tool in Python or Ruby would have to check the validity of the method or paragraph indirectly, as part of a larger-scope check. That way lies madness.

That’s the basis of the reasoning that test cases should be written in the same language as the code under test. The question is: Does the same reasoning apply at higher levels of the test automation pyramid?

The Nature of UI and API Checks

It’s a commonplace for people to say things like, “We’re a Java shop, so we need to use Java-based testing tools even for high-level checks against APIs and UIs.” It makes sense to write microtests in Java for applications written in Java. But is that the right choice for writing automated checks against a web page, a mobile device, a CICS screen, a command-line interface, a SOAP API, or a RESTful API?

The thing is, API checks are not the same thing as microtests. They don’t assert the results of individual methods in the application. They assert the results of service invocations, usually over HTTP. When you invoke a service over HTTP, like when you do a Google search, do you need to know what language the service was written in?

Similarly, checks against mobile apps, web pages, CICS screens, and command-line interfaces don’t know or care about the programming languages used in the applications behind the APIs. There’s no technical reason that such checks have to be written in the same language as the code under test.

In fact, forcing the issue and requiring all testing tools to be in the same language as applications can easily cause more harm than good.

Knowledge Gaps (and Fear of the Same)

The second most common reason people want to stick to a single language for all automated checks is that the technical staff may not be familiar with other languages. “Our developers know Java very well, but they don’t know Ruby. Therefore, they must use [for instance] Cucumber-JVM rather than Cucumber.”

The people who raise this concern are usually in one of two groups: (a) non-technical managers who (apparently) assume the human brain has capacity to learn exactly one programming language, and (b) programmers who are (unfortunately) close to the wrong end of the bell curve (although awesome.)

There are two fundamental logical errors behind this concern.

Second, competent programmers enjoy learning new languages. They entered the field in the first place because they enjoy solving problems and creating software. The programmers will be happy to have the opportunity to learn (a) testing skills and (b) new languages and tools.

Ideally, we’d like to use whatever automated checking tools make sense for each category of checking we need to perform, and for each layer of the test automation pyramid. We’ve already seen the necessity to write microtests in the same language as the code under test.

For UI and API checks, we want to choose tools that give us good functionality and flexibility for checking UIs and APIs; not necessarily for asserting the results of individual Java or C# methods and so forth. It’s a different use case.

There’s no magic involved in accessing a service over HTTP. To illustrate, let’s access a service using *nix command-line programs that are commonly installed. We don’t want to imply that this is a great way to create a large suite of executable checks that will be maintained for years. The purpose is only to show that there’s no need to write API checks in the same programming language that was used to write the system under test.

As of the date of publication, there’s a sample microservice on Heroku we can use for this demonstration. It’s called rpn-service, and it is a Reverse Polish Notation (RPN) calculator. Using curl to invoke the service and jq to see what it returns, we get the following:

So, when we invoke the service with no arguments it returns usage help. We can see the JSON response document contains a key “usage” that has an array of entries with one entry. Let’s check to ensure the “description” entry contains the text, “pass values in postfix order”:

Wrapping that in a bash script, we can check to see that the regex finds a match and call that a ‘pass’.

Good testing tools add value beyond that, of course. They help us with organizing test cases, hiding ugly details under the covers, and running subsets of test suites based on criteria that we define, such as long- vs. short-running cases or cases pertaining to particular application features. They’re also generally easier to live with than command-line programs and shell scripts.

The point is the idea that tests and application code must be written in the same programming language is a myth, or perhaps merely a fear.

Different organizations have different needs and often have unique technical environments. The following considerations are often relevant in larger corporate IT organizations:

Considerations 1 and 2 suggest we want tools that are platform-agnostic. In a pure Microsoft shop, VSTS and SpecFlow and friends might be fine. Most corporate environments are technically heterogeneous. Tools built on cross-platform languages like Java (e.g., RestAssured, JBehave, Cucumber-JVM), Ruby (e.g., Cucumber), JavaScript (e.g., Cucumber-JS), or Python (e.g., Behave) may be more suitable. Tools that run as separate applications may be good choices, as well (e.g., SoapUI, FitNesse). Developers can use them on their Windows development boxes, and the same tools can run on various target platforms.

Considerations 3 and 4 suggest we want tools that provide straightforward ways to organize and re-organize test cases, and to select subsets of the test suite for execution based on any criteria we want to define.

Consideration 5 suggests we want tools that can handle SOAP, REST, and custom APIs without too much trouble.

Consideration 6 suggests we want tools that support test case definition in a form that is understandable to both technical and non-technical stakeholders.

Consideration 7 suggests we want tools that can support example-based and property-based testing.

Expressing Examples With the Given-When-Then Pattern

Gherkin is a popular language for expressing examples based on the given-when-then pattern. Here is the same example we used above for checking the usage help for the RPN calculator service:

Here’s a snippet of code for Cucumber-JVM that runs the examples (omitting boilerplate Java code):

Most of the tools mentioned above can parse gherkin examples, and the code to execute them is roughly similar to this Java example.

Examples are readable by all stakeholders, for purposes of system documentation, when written as Given-When-Then scenarios or in a tabular form. A tool that supports both formats would be preferable to one that supports only one format.

To minimize the number of different tools in the environment, it would be preferable to find a tool that handles API and UI checking equally well. In the author’s experience, the tool that offers the widest range of options and simplest customization path is the Ruby implementation of Cucumber.

Here is a set of examples for a trivial “Hello, World!” application that illustrates the tabular form of Gherkin:

The Ruby code to make this executable looks like this (omitting boilerplate code and helper methods):

Ruby is a cross-platform language. Cucumber itself is a lightweight framework for running examples. Ruby libraries known as gems provide add-on functionality. Gems exist to support a wide range of API standards, markup languages, terminal emulation, assertions and mocks, and ancillary features such as formatting test case output, logging, dealing with web timing issues, and taking screenshots. In addition, practical support for property-based testing is already available. Ruby is an easy language to learn and configuring Cucumber to use various gems is straightforward.

By including the appropriate gems in the test project, it’s no more difficult to run examples against iOS apps, Android apps, or IBM CICS applications than it is to exercise a Web-based “Hello, World!” app.

It’s a logical choice for organizations that support services that offer multiple methods of invocation, as the code for setting up preconditions and specifying expected postconditions can be re-used.

Published at DZone with permission of Dave Nicolette. See the original article here.