After working with RDF, SPARQL, and Virtuoso database for a little while, I became curious about how graph databases actually work. I have experience with using databases, and an idea of how they work internally, but have seldom needed thorough analysis of their inner workings. In this post, I try to better understand both relational and graph databases. My main question is: How exactly do graph databases perform better than relational databases for connected data? Is it how they store the data that makes them so good? Or is there just some algorithm-magic that makes graph databases super slick.

Why and When to Use Graph Databases

Points 2, 3 and 4 are easy to agree with, at least with in my experience. The thing that caught my eye was the better performance feature of graph databases. I wanted understand what kind issues the joins are causing which make them slower compared to traditional relational databases. More specifically, why does adding more joins make RDMS slower. Since joins play a vital role in comparing graph databases with relational databases performance, I will look into two common join algorithms to compare them with the graph database approach.

A DBMS can join in many different ways and two of the most common ones are nested loop join and hash join. All joins are performed two tables at a time, even if more tables are described in the query. This means that in cases with more than two join-tables, intermediary steps are required because the result of first join must be used joined with the third. This again impacts the performance.

Nested loop join is the simplest of the joins where the join is performed by, as the name suggests, nested loops. For each row in the inner table, all rows of the outer table are read. If the join is extended for more tables, the time complexity increases drastically. Nested loop join is only good for small tables or where the final result of the query is small. Indexes are used if they exist on the join column, and this will benefit performance. The following example for a nested loop join between two tables employees and departments, is taken from the Oracle documentation:

If an index is useful in the outer loop due to the where condition or in the inner loop due to index on join column, it will be used. Regardless, the inner loop is run for each row from the outer loop. So, as the joins increase, the nested loops increase and when indexes are used, we avoid the worst case which is time complexity proportional to table sizes (|employees|*|departments|). But, even if indexes are used the complexity still increases and can increase non-linearly, which means it get slower and slower as more joins are added.

Time complexity for hash joining two tables employees (larger) and departments (smaller), is the sum of :

If more joins are added then this procedure must be repeated because of intermediary joins – i.e. create new hash table based on the result of current join to join with the third table. Based on this, it is possible to conclude that hash join gives linear complexity increase as the joins increase. However the actual time may be non-linear because of intermediary join steps, hash table constructions and hash lookups which are very dependent on the data. It is therefore not easy to give a general conclusion on how hash joins effect performance, but we do get an indication.

So, why are joins not a problem for Neo4j? The neat thing about Neo4j is that it does not use indexes at all. Instead, graph nodes are linked to its neighbors directly in the storage. This property of reference is called index-free adjacency. So, when Neo4j performs a graph query for retrieving a sub-graph, it simply has to follow the links in the storage – no index lookups are needed. The cost of each node-to-node traversal is O(1) – so if we are doing a friend-of-a-friend look-up to find, for example, all indirect friends of Alice, the total cost would be proportional to total number of friends in the final result – O(m) where m is the total number of Alice’s indirect friends. Even if the data (number of nodes) increases, if the total number of friends are still the same, the cost will still by O(m). This is because Neo4j first “jumps” to the Alice node using some kind of search or index, and then it simply visits the relating nodes by following the links, until the query is satisfied .

To compare the graph database approach with RDMS we will go through a simple example. Assume that we have tables Employees (E), Departments (D) and Payments (P).

By joining E with D and then E with P, we can calculate for example sum payment for a given department. Given departments d1 and d2, we want to find all the payments to its employees. By using nested loop join, this approach has a time complexity cost proportional to 2 * |E| * |P| (2 for two departments, as we assume that an hash index is used to retrieve the d1 and d2). Using hash join, this gives a a time complexity cost proportional to 2 +|E|+2*|E|+|P|, where 2+|E| is the first join, and 2*|E|+|P| is the second. Again, the first 2 is for retrieving d1 and d2, while |E| is for looping the larger table. 2*|E| is the number of maximum rows that can be constructed by joining d1 and d2 with E. The |P| is the final looping of each row to find corresponding employee in the first joined set, and to create joined rows.

A subset graph of our example is as follows: 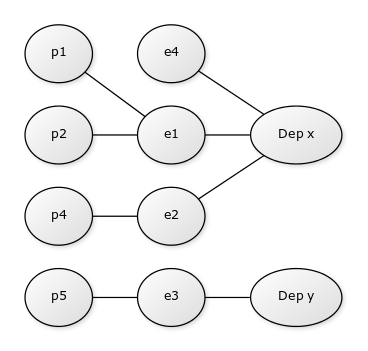 where e’s are employees and p’s are payments.

To find the payments with Neo4j, first a search is conducted to find the departments d1 and d2. Using hash indexing this gives O(1). Then the graph is “walked” to find all the relevant payments, by first visiting all employees in the departments, and through them, all relevant payments. If we assume that the number of payment results are k, then this approach takes O(k). We now have the following time complexities  for our query (simplifying the according to Big-O notation):

Two conclusions can be drawn from these:

Note that these conclusion describe the worst case and in practice, by tuning and optimizing, the cost for using RDMS can be heavily reduced.

Analysis in this post is of course a very simple one, and was mostly conducted to understand the underlying details. In my research, I did a survey find others say about Neo4j performance which is listed below. In summary, I find that Neo4j generally do outperform RDBMS, but there are cases where this does not happen. The lesson learned is that graph database field is still very young as lots of development and research is happening there. This implies that when someone considers a graph database, performance tests should be conducted to verify that the database actually performs well for their data.

Published at DZone with permission of Qadeer Khan. See the original article here.