With all the existing frameworks and libraries, the web frontend development tech stack is extremely rich and multifaceted. For a business owner willing to take his business online, choosing suitable tools might be a tough call. Yet, it still remains a crucial aspect for the future success of a product.

Choosing a tried and true tool, such as Angular, might seem like a good idea. But there are more options to consider if you are building a specific type of product. React, one of the fastest-growing and most popular frontend libraries has been steadily gaining traction among developers, as well as business owners. Due to a number of its benefits, it might soon become the go-to web development tool.

Why choose React? And, most importantly, when should you use it? Let’s take a closer look at the advantages of React and its use cases.

What is ReactJS? React is a “declarative, efficient, and flexible JavaScript library for building user interfaces,” as defined by its creators. Simply put, it allows you to create a fast, simple and scalable frontend for web applications.

A relatively young framework, ReactJS has taken the web development world by storm. Created initially as an internal tool by Facebook engineers, the framework soon went open source, which allowed it to further grow and become widely adopted among individual developers.

The latest Stack Overflow Developer Survey finds that React is the most loved among the frameworks, libraries, and other technologies: 66.9% of developers gave their votes for it.

At the same time, it is also the third most wanted technology, according to this survey. This clearly indicates the fact that the library is not only highly rated by the developer community, but also is in great demand among business owners.

Despite its popularity, the Angular vs. React dilemma is completely unfounded. While Angular is a full-fledged MVC framework, React is a lightweight view library, which typically needs to be complemented with other tools (Flux or Redux) to get a complete architecture. Thus, comparing React and Angular is somewhat similar to comparing apples and oranges. In fact, both tools can be used interchangeably within one project (which, however, is not recommended, mostly to avoid violating coding standards and best practices).

With over 100,000 websites currently using React, according to BuiltWith.com, there should be a good reason for it. So, what made this young technology so popular? Having successfully implemented a number of React projects here at Eastern Peak, we can clearly see the benefits of this tool. Thus, the major advantages of React for web development include the following:

According to the official release documentation, React was designed for “building large scale apps with data that changes over time.” Thus, the best use cases for React applications include the following:

On the other hand, using React on static websites and blogs could be unjustified. Thus, React finds its best application within certain verticals, including business, technology, travel, and shopping. 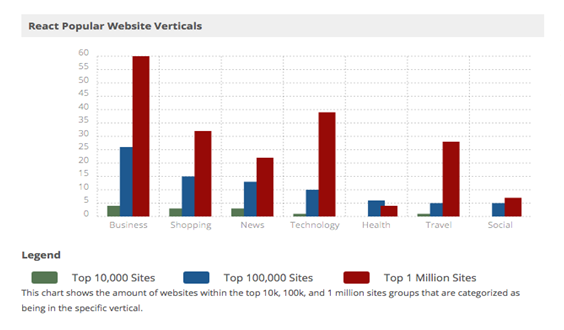