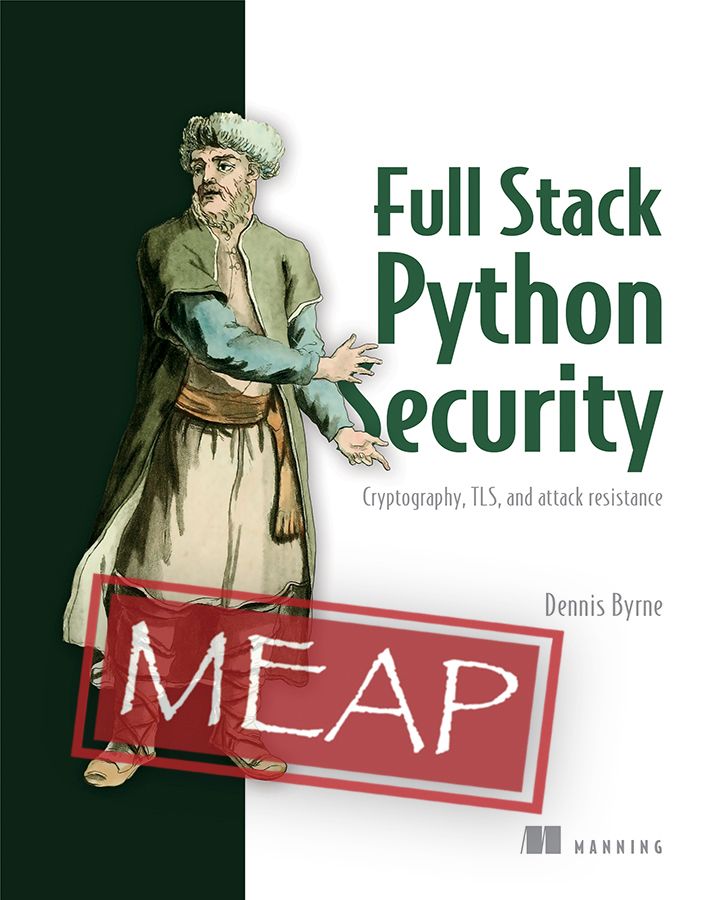 This article, an excerpt from my book "Full Stack Python Security", examines the underlying concept behind every authentication scheme: password hashing. I’ll teach you how and why authentication systems hash passwords. Along the way you'll learn about salting and key derivation functions. I'll also demonstrate how to apply these concepts using a Django application server.

Organizations have represented passwords in many different ways. Some ways are much more dangerous than others. Let’s take a look at three approaches:

Plaintext is the most egregious way to store user passwords. In this scenario the system stores a verbatim copy of the password. The password in storage is literally compared to the password reproduced by the user when they login. This is a horrible practice because an attacker has access to every user’s account if they gain unauthorized access to the password store. This could be an attacker from outside of the organization or an employee such as a system administrator.

In 2013, the encrypted passwords of more than 38 million Adobe users were breached and publicized. The passwords were encrypted with 3DES in ECB mode. Within a month millions of these passwords were reverse-engineered, or cracked, by hackers and cryptography analysts.

Any modern authentication system doesn’t store your password; it hashes your password. When you log in the system compares a hash value of your reproduced password to the hash value in storage. If the two values match you are authenticated. If the two values don’t match you have to try again. A simplified version of this process is illustrated by the following figure. Both hash function invocations are designated by a funnel; a fingerprint designates a hash value.

Password management is a great real-world example of cryptographic hash function properties. Unlike encryption algorithms, hash functions are one-way; the password is easy to verify but difficult to recover. The importance of collision resistance is obvious; if two passwords collide with matching hash values then either password can be used to access the same account.

How were these passwords cracked so quickly? Suppose it is 2012 and Mallory wants to crack the recently published hash values. She downloads the following dataset containing breached usernames and SHA1 hash values.

Mallory has several tools at her disposal:

Last but not least, Mallory can try her luck with a rainbow table. A rainbow table is a very large table of messages mapped to pre-computed hash values. This allows Mallory to quickly find which message (password) a hash value maps to without resorting to brute force; she can trade space for time. In other words, she can pay the storage and transfer costs of acquiring the rainbow table rather than pay the computational overhead of brute force cracking. For example, the SHA1 rainbow table at https://project-rainbowcrack.com is 690 GB.

The passwords for all three users are shown in the following (extremely abridged) rainbow table. Notice Bob is using a much stronger password than Alice and Charlie.

Clearly a hash function by itself is unsuitable for password hashing. In the next two sections I show you a couple of ways to resist attackers like Mallory.

Salting is a way to compute a different hash value from two or more identical messages. A salt is a random string of bytes that accompanies the message as input to a hash function. Each message is paired with a unique salt. The following diagram illustrates salted hashing. As in the previous figure, both hash function invocations are depicted by a funnel; both hash values are depicted by fingerprints. 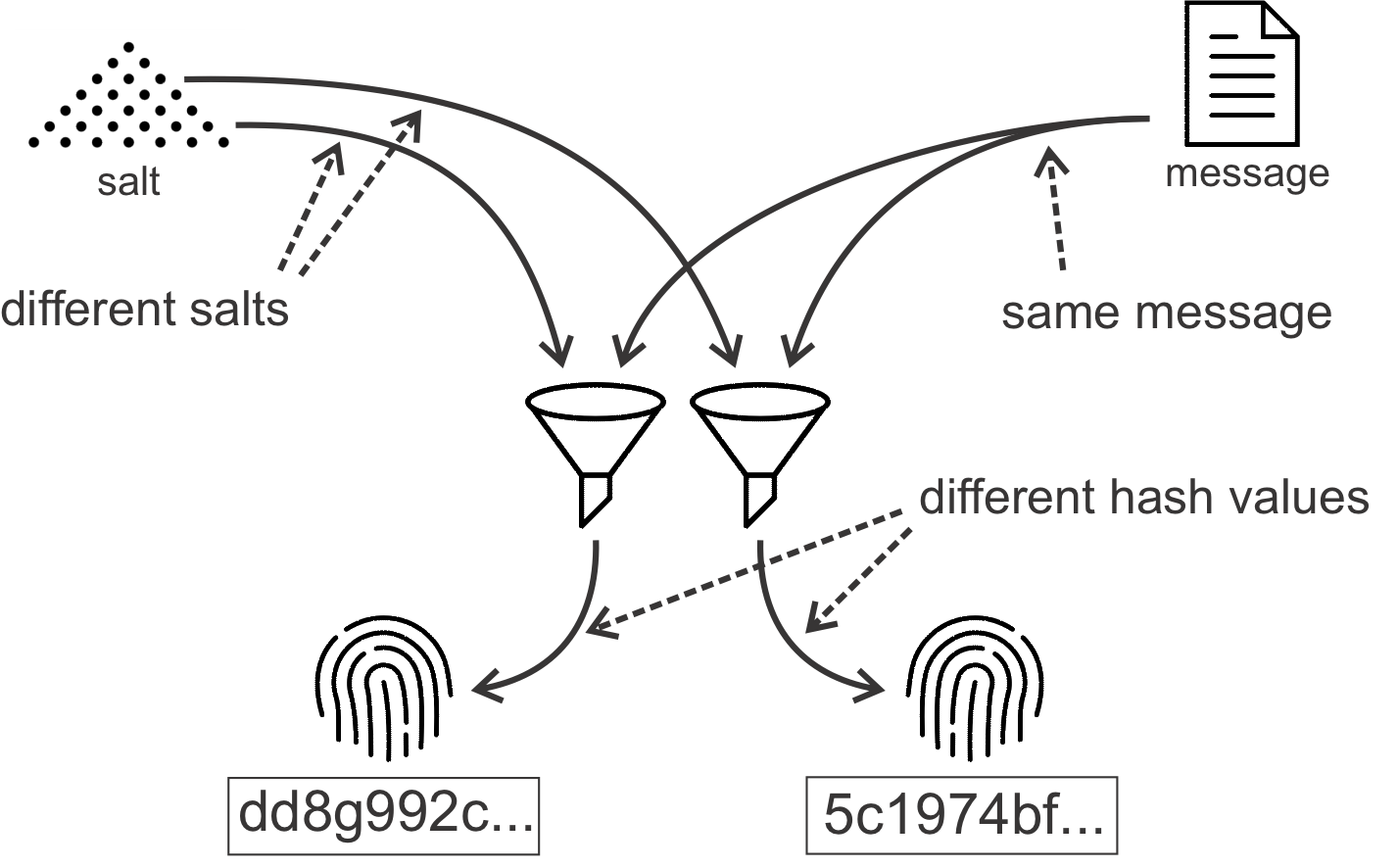 The following code demonstrates salted hashing with a hash function named BLAKE2. This code hashes the same message twice. Each message is hashed with a unique 16-byte salt, resulting in a unique hash value.

Despite built-in support for salt, BLAKE2 is unsuitable for password hashing (so is every other regular cryptographic hash function). The primary limitation of these functions is counterintuitive: these functions are too fast. The faster a hash function the lower it costs to carry out a brute force attack. This makes it cheaper for someone such as Mallory to crack passwords.

WARNING: BLAKE2 appears in this section as a means of introducing the concept of a salt. It should never be used for password hashing. It is way too fast.

Password hashing is one of the only situations where you actually want to strive for inefficiency. Fast is bad; slow is good. Regular hash functions are the wrong tool for the job. In the next section I introduce you to a category of functions that are slow by design.

Key derivation functions (KDF) occupy an interesting niche in computer science because they are one of the only valid use cases for excessive resource consumption. These functions hash data while intentionally consuming a lot of computational resources, memory, or both. For this reason KDFs have displaced regular hash functions as the safest way to hash passwords. The higher the resource consumption, the more expensive it is to crack the passwords with brute force.

Unlike regular hash functions a KDF accepts at least one configuration parameter designed to tune resource consumption. A KDF doesn't just run slow; you tell it how slow to run. The following figure illustrates the inputs and output of a KDF. 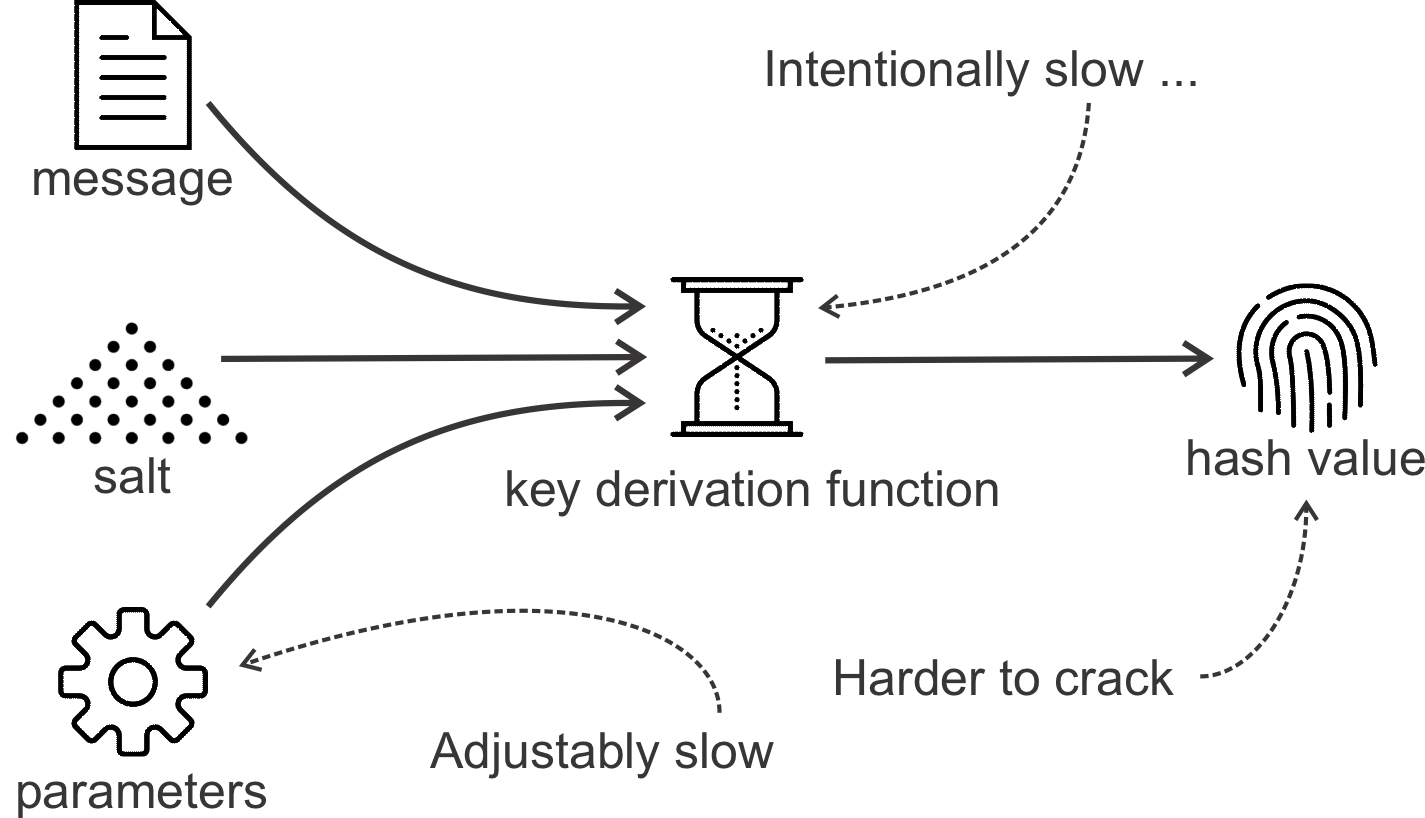 Password-Based Key Derivation Function 2 (PBKDF2) is a very popular password-based KDF. This is arguably the most widely used KDF in Python, because Django uses it to hash passwords by default. PBKDF2 is designed to wrap and iteratively call a hash function. The iteration count and the hash function are both configurable. In the real world, PBKDF2 usually wraps an HMAC function, which in turn often wraps SHA-256. The following figure depicts an instance of PBKDF2 wrapping HMAC-SHA256.

Create a file named pbkdf2.py and add the following code to it. This script establishes a crude performance benchmark for PBKDF2. It begins by parsing the iteration count from the command-line. This number tunes PBKDF2 by telling it how many times to call HMAC-SHA256. Next, the script defines a function called test; this function wraps pbkdf2_hmac, a function in Python’s hashlib module. The pbkdf2_hmac function expects the name of an underlying hash function, a message, a salt, and the iteration count. Finally, the script uses the timeit module to record the number of seconds it takes to run the test method 10 times.

Run the following command, shown in bold font, to execute the script with an iteration count of 260,000. At the time of this writing Django defaults to this number when hashing passwords with PBKDF2. The last line of output, also shown in bold font, is the number of seconds the script takes to run PBKDF2 10 times.

Next, add a zero to the end of the command line and run the script again. Notice the steep increase in response time, shown here in bold font.

When Bob logs in to a Django server he must wait for PBKDF2 to return once. If Mallory tries to crack Bob’s password she must wait for it to return over and over again, until she generates whatever password Bob has. This task can easily take more time than Mallory has to live if Bob chose a passphrase.

Attackers like Mallory often use graphics processing units (GPU) to reduce the time of a brute force attack by orders of magnitude. GPUs are specialized processors, originally designed for rendering graphics. Like a CPU, a GPU processes data with multiple cores. A CPU core is faster than a GPU core, but a GPU can have orders of magnitude more cores more than a CPU. This allows GPUs to excel at tasks that can be divided into many parallelizable subtasks. Tasks like this include machine learning, bitcoin mining, and, you guessed it, password cracking. Cryptographers have responded to this threat by creating a new generation of KDFs designed to resist this kind of attack.

In 2013, a group of cryptographers and security practitioners announced a new Password Hashing Competition (PHC). The goal of this competition was to select and standardize on a password hashing algorithm capable of resisting modern cracking techniques (https://password-hashing.net). Two years later a password-based KDF named Argon2 won the PHC.

Argon2 is both memory-intensive and computationally intensive. This means an aspiring password cracker must acquire a large amount of memory as well as a large amount of computational resources. Argon2 is lauded for its ability to resist FPGA and GPU driven cracking efforts. This is why you are much better off hashing passwords with Argon2 instead of PBKDF2. In the next section I show you how to configure Django to use Argon2.

Hashing Passwords with Argon2 and Django

To configure a preproduction Django project with Argon2, ensure Argon2PasswordHasher is the first and only password hasher in PASSWORD_HASHERS. Finally, using a package manager of your choice, install the argon2-cffi package. Both of the following command lines are examples of how to do this. The argon2-cffi package provides Argon2PasswordHasher with an Argon2 implementation.

This will cost you only a few seconds of your time if you make this change before the system is pushed to production. The amount of work goes up dramatically if you want to make this change after production users set their passwords. This is because you must migrate the password hash values in addition to upgrading the password hasher. If you want to learn about a protocol for migration efforts like this, check out the book on Manning’s liveBook platform here.

Published at DZone with permission of Dennis Byrne. See the original article here.