On a serendipitous day a few years ago, Andrew Barnes found himself aboard an airplane, just like he had hundreds of times before. This flight, however, was different.

While I don’t know the exact article he refers to in his above TED Talk, this one, entitled “Proof That You Should Get a Life,” should stand in just fine. (It seems The Economist publishes on this topic often.)

Despite popular opinion, working longer hours does not necessarily correlate to increased productivity. In fact, the opposite is more than likely the case.

As the CEO of Perpetual Guardian, an estate management firm in New Zealand, Barnes had a sneaking suspicion he could get similar results if he, too, required his team to work less, not more.

He thus hatched a plan that, as he explains in the video, “went global” – indeed, the push for fewer working hours is slowly but surely going mainstream, particularly in the wake of new technologies that help us get more done in less time.

When he returned to the office, Barnes announced the trial of what seemed like an insane idea – well, at least as far as the board and leadership team were concerned: Perpetual Guardian employees would begin to work just 32 hours per week with full pay.

You really should watch the above clip of the team’s reaction when they realize they’ve just been granted never-ending three-day weekends. Their confused laughter is pretty priceless.

But as with most things in the corporate world, this trial was certainly more than a magnanimous gift for a job well done. These workers had to prove they could still get the job done.

And boy, did they prove it.

With the help of two Auckland university researchers, Barnes documented the remarkable results. Not only was the company 20 percent more productive on any given workday, keeping overall productivity in line with what it had been before, but the improvements in areas like stress level and engagement were through the roof. 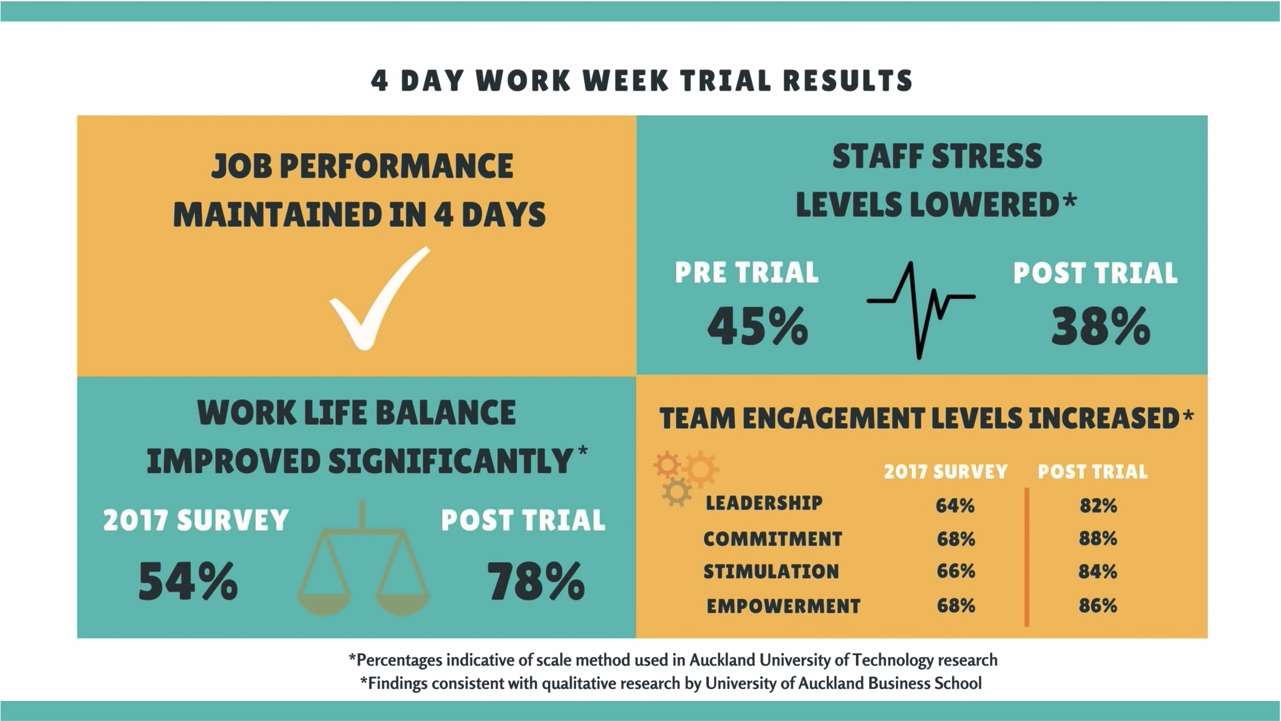 In fact, the researchers had never before seen such numbers in New Zealand. Clearly, Barnes had stumbled upon something truly groundbreaking.

Perpetual Guardian, though, wasn’t the first company to try this schedule on for size. Three years earlier, online education company Treehouse made the headlines when they announced the same initiative – workers would only be required to work 32 hours per week because, as CEO Ryan Carson explained to The Atlantic, taking “ridiculously good care of people…is the right thing to do.”

Despite his seemingly emphatic support, though – which really does come across in this Atlantic video – Carson scrapped the program just a year later.

So what happened? Why did the 32-hour week work so well for Barnes but not for Carson?

The answer, as with most things, is complicated, but I do believe there are some important distinctions that can (and should) be pointed out.

First of all, as Barnes explains in his TED Talk, employees at Perpetual Guardian began to hold themselves accountable for the success of this new schedule. They became so committed to the job when on the clock, in fact, that one worker’s wife actually began to complain about it. Although she wanted him to look at the prospective new home listings she would send him throughout the workday – like he had been doing for months before – he knew he could no longer acquiesce.

“I will not be able to look my colleagues in the eyes and say I did everything possible to keep our four-day,” he told her.

So many other employees followed suit that the 32-hour week became permanent earlier this year.

The Treehouse story, on the other hand, seems to be a tale of mismanaged priorities and good, old-fashioned investor pressure.

In addition to the shortened workweek, the company announced (a few years before) that they were getting rid of managers all together. As this article in Oregon Live points out, workers were given “the authority to propose their own projects, manage themselves, and evaluate each other,” an initiative that bombed as spectacularly as most people would imagine.

While holding oneself accountable for one’s individual contribution to a team seems completely reasonable in a healthy work culture – as was the case for Perpetual Guardian – doing the same when no one actually knows the overarching goal is another matter entirely.

Sure, we can applaud Carson’s willingness to try something different and empower his workers to more directly contribute to the company, but without a management structure steering the ship, these workers were, in effect, clueless as to what they should have been working on during their precious hours in the office.

Then, there’s the matter of investors wanting their return on investment. When Treehouse announced it was laying off one-fifth of its workforce in 2016, a decision made to hasten the company’s path to profitability, largely at the behest of investors, Carson wrote that "the employees understood that we couldn't lay off people and then turn around and say we weren't going to work on Fridays."

As a matter of fact, he now reportedly works an average of 65 hours per week.

But does this actually mean he’s more productive? Or is he simply succumbing to the established norm because it makes other parties more comfortable with his apparent level of commitment to the company? Changing the status quo, after all, isn’t an easy task.

Without meticulous documentation – like that put together by Perpetual Guardian’s researchers – Carson ultimately had very little to defend his position, other than the glowing recommendation of employees like Andrew Chokley, whose brief foray into the four-day workweek meant he could finally build the relationship with his children he had always wanted.

Well, at least for a little while.