You can use your existing web development skills and can produce native iOS and Android app using those skills. It's completely possible to utilize your HTML, CSS, and JavaScript skills to develop native Android and iOS apps.

I'm not talking about the hybrid apps or just an app wrapper on a mobile website but actual native apps. Pure, native apps that you design in iOS using Swift or in Android using Java or Kotlin, they are pure apps and they are developed with common web technologies: HTML, CSS and JavaScript.

If you still don't believe that these apps can be really be awesome, take out your phone and have a look at one of these apps: Facebook, Messenger, Instagram, Skype, and Airbnb. They are developed in React Native.

Facebook was facing a lot of problems about redesigning their apps and everything. The problem was handling many users and rolling out new features. Facebook needed something more robust and faster that can handle a lot of traffic as well as can be designed really quickly. The brilliant team at Facebook started working on a JavaScript library, which came to be known as React.

The best part is React employs a faster virtual DOM. Although React is a library, lightweight components can be injected anywhere. You can use react with PHP, MySQL, Firebase, MongoDB, or any database system of your choice.

You must be wondering, isn’t React for designing web applications? Consider React Native as the successor of React.js for mobile app development. All the things that you learned in React like component props, states, Redux, modals, etc. are part of React Native as well.

The Dual Advantage of React Native

In React Native, unlike native Java and Swift code, you don't ever compile your app. You just reload it just like do you a website in a web browser.

Moreover, you don't have to maintain two separate codebases for your application. For example, let's say you are a business and I am application development company to whom you have outsourced a mobile app project.

Of course, you want an app for both Android and iOS in addition to the web. It requires two teams, one for each mobile platform: one team for the Android application and one team for the iOS application. Omplementing the same exact features in the iOS and Android apps would require a lot of communication between those teams: app features, deadlines, delivery, client expectations and requirements, etc.

React Native apps perform, more or less, like an app written in Swift or Java/Kotlin. A Medium user ran a few tests to compare its performance with the native code and found performance to be on par with an equivalent app in Swift, sometimes even better. The Medium article measured performance in three areas: CPU, GPU, and Memory utilization at the run time.

In CPU usage, the performance was similar although maps performed better in Swift. 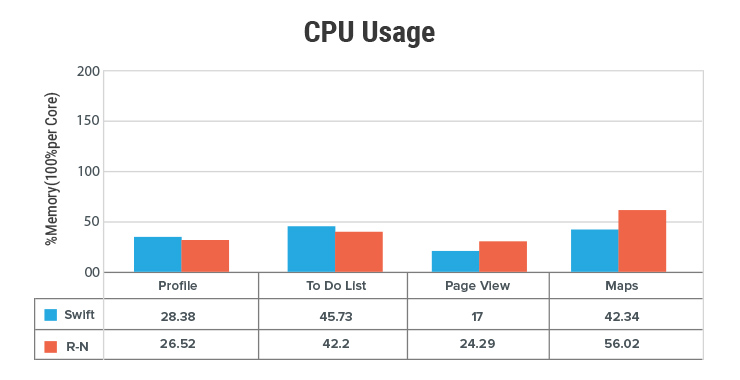 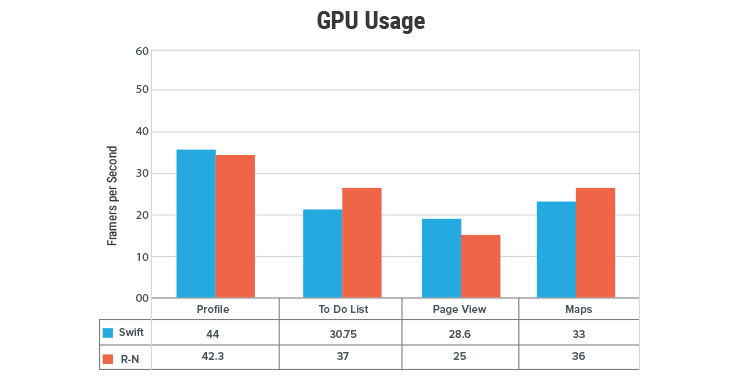 For memory tests, the author concentrated on maps as the memory footprints of other features was negligible to figure out a contrast. Evidently, at the peak performance, React Native used a whopping 61.11 MiB less memory than Swift. While performing the task and recording the measurements, a spike in Memory usage was observed at the exact moment, he pressed the “Maps” tab, which prompted the MapView to find my current location and highlight it with a blue, flickering dot. 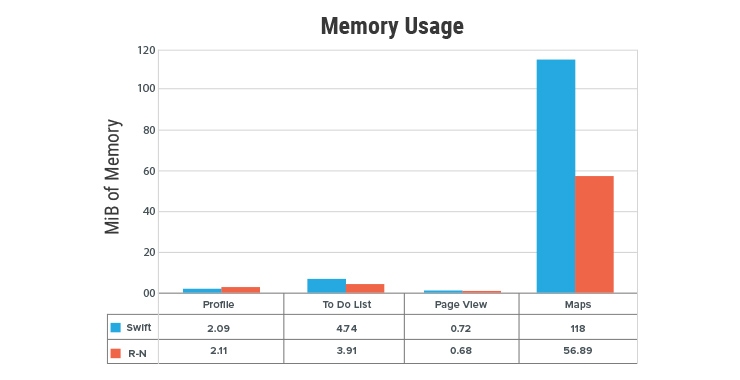 React Native Is the Smartest Way to Develop Mobile Apps

In React Native, you just have to maintain a single codebase and that code will produce native Android apps as well as iOS apps. React Native is getting a lot of attention and people love how things are shaping up for React Native and the community is growing.

Is This the End of Native App Development?

No, there is still a need for native applications. Some businesses prefer React Native while others prefer native code in Kotlin or Swift. It's always good to have many mobile technologies around to choose from. Desktop application developers always had a lot of programming languages and technologies to choose from and most of them are still here, going strong.

For example, there are still apps that are being developed in Ruby on Rails, Django, PHP, as well as Node.js. Technologies evolve as per the demand.

The Tremendous Growth and the Future 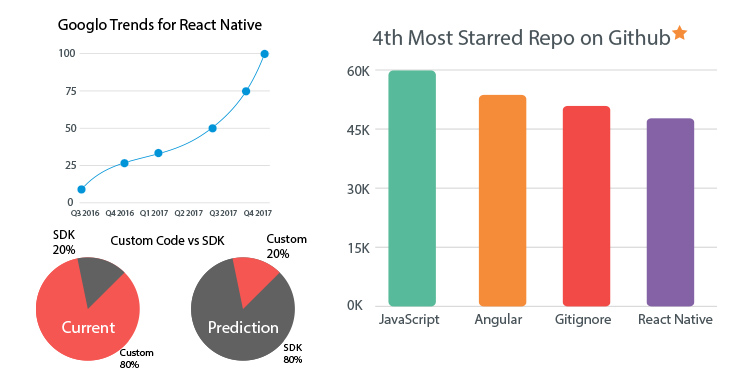 Google Trends is a popular tool to understand people’s interest in a search term. When used to forecast people interest in technology or a mobile development technique in this context, it can tell which of them are growing which are plummeting. 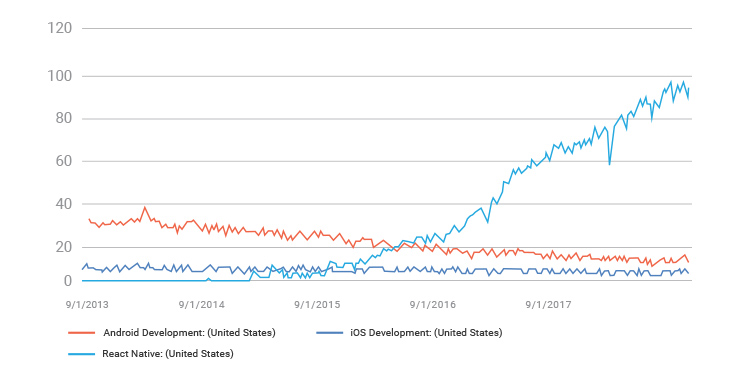 Android developers have a consistent complaint. They don’t earn as much as their iOS counterparts and the ROI is hard to come by. And the revenue gap is almost twice in a few demographics.

The popularity of React Native and similar JavaScript frameworks are blurring the lines between web and mobile app developers. For the first time in the history of mobile development, a developer can say I don’t want to learn Java or Objective C and still build a mobile app.