In this blog series, we’ll be experimenting with the most interesting blends of data and tools. Whether it’s mixing traditional sources with modern data lakes, open-source DevOps on the cloud with protected internal legacy tools, SQL with NoSQL, web-wisdom-of-the-crowd with in-house handwritten notes, or IoT sensor data with idle chatting, we’re curious to find out: will they blend? Want to find out what happens when IBM Watson meets Google News, Hadoop Hive meets Excel, R meets Python, or MS Word meets MongoDB?

In today’s challenge, we are going to show how the theory of evolution has evolved from the first Darwin’s formulation to the most recent discoveries.

The foundation stone of evolutionary biology is considered to be the book “On the Origin of Species” (1859) by Charles Darwin. This book contains the first revolutionary formulation of the theory of evolutionary biology. Even though the book at the time has produced a revolution in the approach to species evolution, many of the concepts illustrated there might seem now incomplete or even obsolete. Notice that it was published in 1859, when nothing was known about DNA and very little about genetics.

In the early 20th century, indeed, the Modern Synthesis theory reconciled some aspects of Darwin’s theory with more recent research findings on evolution.

The goal of this blog post is to represent the original theory of evolution as well as the Modern Synthesis theory by means of their main keywords. Changes in the used keywords will reflect changes in the presented theory.

Scanned Xerox copies of Darwin’s book abound on the web, for example, at http://darwin-online.org.uk/converted/pdf/1861_OriginNY_F382.pdf. How can we make the contents of such copies available to KNIME? This is where Optical Character Recognition (OCR) comes into play.

On the other side, to find a summary of the current evolutionary concepts, we could just query Wikipedia, or better, DBpedia, using semantic web SPARQL queries.

Xerox copies on one side, read via OCR, and semantic web queries on the other side. Will they blend?

Topic: Changes in the theory of evolution.

Challenge: Blend a Xerox copy of a book with semantic web queries.

Darwin’s book is only available in printed form. The first part of our workflow will try to extract the content of the book from its scanned copy. This is only possible using an Optical Character Recognition software.

We are in luck! KNIME Analytics Platform integrates the Tesseract OCR software as the KNIME Image Processing - Tess4J Integration. This package is available under KNIME Community Contributions - Image Processing and Analysis extension (see how to install KNIME Extensions). Let’s continue step by step, after the package installation.

This part of the workflow is shown in the upper branch of the final workflow in Figure 1, the part labeled as “Optical Character Recognition of Xerox Copy.” 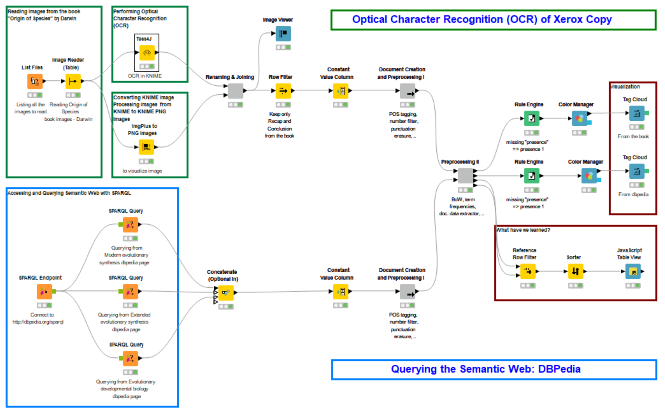 Figure 1. Final workflow where OCR (upper branch) meets Semantic Web Queries (lower branch) to show the change in keywords of original and later formulations of the theory of evolution. This workflow is available on the KNIME EXAMPLES server under 99_Community/01_Image_Processing/02_Integrations/03_Tess4J/02_OCR_meets_SemanticWeb99_Community/01_Image_Processing/02_Integrations/03_Tess4J/02_OCR_meets_SemanticWeb*

On the other side, we want to query DBpedia for the descriptions of the modern evolutionary theories. This part can be seen in the lower branch of the workflow in figure 1, the one named “Querying the Semantic Web: DBpedia.”

We have now texts from the book and texts from DBpedia. We want to distil all of them to just a few representative keywords and blend them together.

Interestingly enough the word “evolution” is not found in Darwin’s book. Although this term was soon associated with Darwin’s theories and became popular, Darwin himself preferred to use the concept of “descent with modification” and even more “natural selection,” as we have remarked earlier.

Words like “species” and “varieties” also play a central role into Darwin’s theory. Indeed, the whole theory spawned from the observation of the species variety on Earth. On the opposite words like “modern”, “synthesis”, and “evolution” are the cornerstone of the modern evolutionary theories.

Figure 2. Word Cloud generated from the “Recap” and “Conclusions” sections in the book “On the Origin of the Species” by Charles Darwin.

What has been learned from the publication time of the book “On the Origin of Species” to the current time? One thing that Darwin for sure could not know is genetics!

If we look for the word “gene” in the table view of the Javascript Table View node, we surely find “genetics”, “gene”, and a number of other related words! Remember that this table view displays the terms found in the description of modern evolutionary theories but not in Darwin’s original book (Fig. 4).

Figure 4. List of “genetics” related words present in the modern evolutionary theories (as derived from the queries to DBpedia) and not present yet in Darwin’s original book (as derived from the OCR processing of the scanned PNG images of the book pages). Such words are all listed in the table view of the Javascript Table View node in the final workflow.

From the results of this small experiment, we understand that the evolutionary theory has itself evolved from Darwin seminal work to the modern research studies.

Also, in this experiment, we successfully blend data from a scanned Xerox copy and data from DBpedia. We have used the Tesseract OCR integration to extract the book content and SPARQL queries to extract DBpedia descriptions … and yes, they blend!

If you enjoyed this, please share it generously and let us know your ideas for future blends.