This is exciting for Microsoft because it gives us the opportunity to offer this large class of developers, who likely don’t consider themselves Windows developers, a bridge to leverage their existing skills to build real Windows applications. But Microsoft is not the only winner.

XAML remains the UI solution for .Net, metro developers. But CPP developers can now leverage XAML, too. This is great news for CPP developers – and, subtly, even better news for the XAML story and its ubiquity throughout the Microsoft stack. (think: Embedded, Windows, Phone, more…)

Like myself, many developers have aligned their careers with the Microsoft stack. It has paid off with the pleasure of Visual Studio, the depth of the .Net framework, the general appeal of the platform, and some pain points that prove nobody’s perfect. Nonetheless, most of us are paying our bills.

Many of those developers (most?) have discovered, learned, and come to love how simple and robust XAML is for declaring a UI. Many months have been invested. Of those developers, is XAML sticking? I mean, you love XAML, but is all this new choice changing Microsoft development?

Naturally, there is no way to measure this question. What I do know, is that when I speak before conferences, user groups, and students, XAML remains a strong topic – maybe it’s because I am always talking about XAML. Maybe because it is freaking awesome. But even online (like on StackOverflow) XAML topics bloom in volume and consumption.

MSDN has created forums for each of the Metro technologies (CPP, .Net, and HTML5), giving our developers a place to go and find direction and help. Especially in these early stages, some very important product members roam those halls. Still, these forums are very active. Take a look: 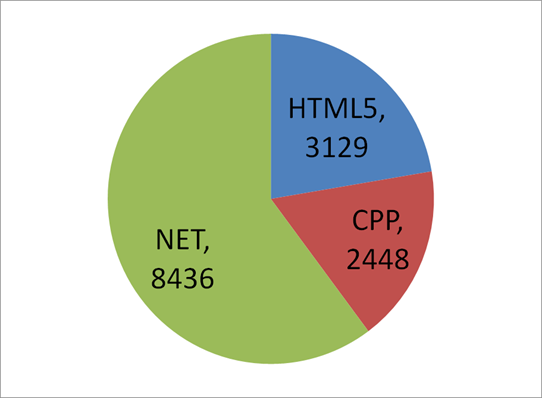 These numbers don’t tell us anything real – but they suggest things. Look at the dominance of XAML. It’s just what we would have expected – and perhaps what you would have wanted.

Managed XAML is more then the rest combined – even including Direct3D forums. But XAML (Managed & CPP) holds the lion’s share of more than 75%.

Naturally, we hope the HTML5 numbers will grow. We hope that our family of Microsoft developers will continue to build applications with the skills that have created their careers. Managed or unmanaged, use the skills you have to build amazing Windows 8 metro applications.

But, we also hope a new breed of developers will leverage these opportunities, too – writing real, quality Windows application in the Metro environment. Should an influx occur, it makes everyone a winner – so don’t lament “back when XAML dominated”. The future of the platform will require growth in the community and ecosystem. Yes, these are the golden years for XAML developers. But there’s room at the table for more seats. And sharing doesn’t mean losing.

Forum activity isn’t scientific, right? And, today’s metrics don’t imply tomorrow’s. But it’s fun to consider the lay of the land and consider what’s to come. With recent announcements about cool innovations in the next Blend for XAML, developers like me (C#/XAML) have lots to look forward to.