windows azure has historically been a pure paas solution with the deployment unit for compute being a hosted service comprising an optional web role and zero or more worker roles. each role is deployed as one or more virtual machine instances. a hosted service formed a security boundary, with the only way to access role instances being through the load-balanced public input endpoint. role instances inside a hosted service can communicate directly using internal endpoints which provided lower latency because they didn’t go through the windows azure load balancer.

the first example described earlier – a waws front end to a sql server back end – cannot use this technique because a waws website cannot be added to a virtual network. however, the example would work were the front-end website to be hosted by a paas web role located in the same virtual network as the back-end sql server virtual machine. the latter would not need a public endpoint it would only need an appropriately configured firewall. the second example can use this technique, with the node.js cloud service having a public endpoint and the cassandra cluster having no public endpoint.

michael washam describes this technique in one of the excellent posts on his blog.

a virtual network is created using the networks item in the preview windows azure portal. this brings up a wizard which requests the following information:

the address space and subnets page requests the following information:

the dns servers and local networks page can be passed through without providing any information.

once the virtual network has been created, its configuration can be viewed as follows: 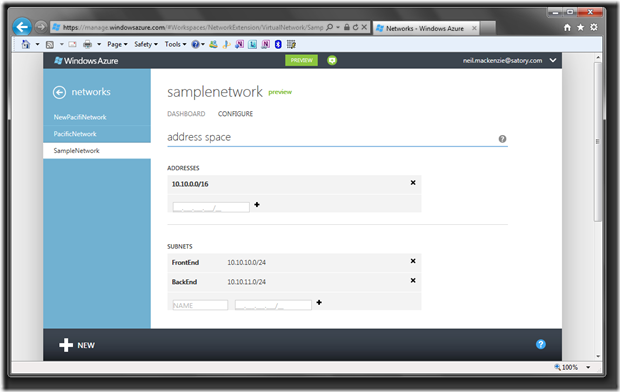 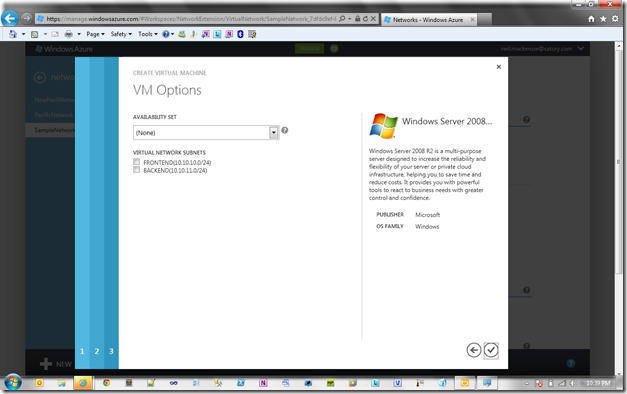 once the virtual machine has been created, remote desktop can be used to access it. the window firewall with advanced security application can then be used to modify the firewall as needed.

adding a paas cloud service to the virtual network

a paas cloud service is added to a virtual network by adding a networkconfiguration section to its service configuration file. this is located after the end of the role section. for example:

services on role instances can be exposed to other virtual machines in the virtual network by modifying the firewall on each role instance.