a couple co-workers and i had a couple days’ opportunity at my day job to tinker with creating a windows phone 7 app as a proof of concept. we successfully created an app that lets you find and purchase a company product (complete with checkout, although the checkout part was web-based), access account information via a web interface, and contact customer support via either an e-mail form or a “call us” button that, yes, would dial customer support via the phone function of the device. (strangely, the phone part was the only part that did not work nor give any “not implemented” nor “not supported” feedback.)

we accomplished all that in two days, plus some reading up on xaml knowledge (i.e. i’d spent the entire prior saturday wading through the petzold pdf that had been linked from the developer web site .. where is that petzold pdf link now?), plus some insider knowledge of existing apis and some preexisting web interfaces used with other mobile devices. the only huge hold-up for us, as far as i was concerned, was the learning curve of the tool chain. i mean, it’s c# which i’m fluent in, but it’s also xaml which i’ve used but never mastered, and it’s brand-new silverlight 4.0 (a binary-incompatible derivative thereof, i think). and i’m still pretty green to mvvm and still don’t understand a lot of the basics of mvvm such as how and when to use icommand, etc. but we got a prototype built, with only two days to do it.

that said and done, however, i walked away from that little mini-project with a few opinions. a couple years ago i tinkered with iphone development with the xcode / obj-c / interface builder tool chain, so i have the two phone sdk experiences to compare.

one theme – “minimalistic” – to rule them all?

my immediate observation is that the ui aesthetic guidance in the apple toolchain is nowhere to be seen in microsoft’s toolchain, and i expect this will hurt microsoft. sure, microsoft pre-packages a couple white-on-black templates as an aesthetic suggestion to get you started with a basic theme. but that’s where guidance ends. you’re given a few xaml controls to get you started, and everything starts at a bland white-on-black. a button, for example, it’s just a white rectangle, no gradient, no border bezel, same story as the white-square-on-a-white-line slider control, all to reinforce the idea that white-on-black is good because oled displays consume 50% as much energy this way versus 3x more energy if everything displays in full color. 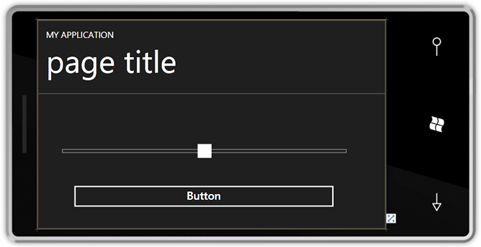 wow, microsoft, you outdid yourselves here, that is a beautiful slider handle! (not.)

and on that latter note, why didn’t microsoft innovate here, such as this: as soon as the user interacts with the device, for a full 15-30 seconds everything’s in rich, full color, then after 30 seconds of inactivity the view goes into “interactive screen saver” mode whereby the colors fade to inverse and you see the color scheme that’s on the device color scheme now? toggle this behavior for your app or navigation “page” in the sdk with a boolean switch and a timespan setting. just a thought.

whereas, with apple, in interface builder (apple’s gui designer) you’re given a nice big library of richly colored controls and widgets including a nice tab control on the bottom, a header control on top where you can have your richly labeled back and forward buttons, and a number of nice interactive controls such as a “checkbox” that actually renders as a beautifully detailed on/off slider, complete with simulated physics and even a drop shadow on the moving slider.

it’s not the absence of aesthetic tooling that bothers me here. actually, microsoft opened the door wide open to aesthetic freedom, as xaml richly supports deliciously detailed interactive graphics with expression blend and the like. my issue is the fact that other than “minimalistic white-on-black” there is no guidance, which is an issue that plagued windows mobile 6 and previous windows mobile flavors. you will have some beautiful windows phone 7 apps like the foursquare app, and then you will have some apps from people who learned silverlight and go nuts with gradients and bright, flashy, ugly designs, or who simply ported their silverlight apps straight over to the windows phone 7 sdk. aesthetic inconsistency is going to be a nuisance. this happened in apple’s developer community, too, but you’re almost required to do this with the windows phone 7 sdk because the prefab tooling in the windows phone 7 sdk is, at least so far, incomplete. then again, this is still just a ctp (a beta), so we don’t know how much more complete the sdk will be on its release.

the sdk comes also with a “list application” template, which demonstrates how to have that pretty list that has the 3d rotating items when you tap on them or navigate around. that was really neat, but then i found myself scratching my head wondering how to make that behavior stick across the rest of the application? can i declare this animation/storyboard definition once and reference it with a one-line behavioral reference of some kind across all of my “navigation pages”? if so, that was not demonstrated at all, and it looked like i’d have to copy and paste everything in the templated demonstration to each and every page i’d create. we ultimately just ignored the animation code, saddened that only the “root menu” showed this animation, because it’s really not worth it to copy/paste so much code (about 50 lines of xaml) everywhere, making a mess of the markup.

my other complaint is with the silverlight 4 web browser component. it is truly wonderful that silverlight has an integrated web browser component, and i adore microsoft for adding it especially for the windows phone 7 sdk, as it’s absolutely necessary to integrate the web browser with many internet-enabled applications. that said, however, i found no easy way of interacting with the dom from the silverlight clr. in windows’ internet explorer, you had to make a separate com reference to mshtml.dll before you could interact with the dom. i used to do this heavily. perhaps i’m spoiled. but not having access to the document interface and, as far as i can tell, only being able to navigate and toggle scripting support really worries me that my hands will be tied here. it was, after all, microsoft who invented dynamic html with fully dynamic content back in internet explorer 4, when microsoft’s innovation inspired me so much that i decided to go all-out into being a web developer. that was way over a decade ago. i still want that power; xaml doesn’t always cut it.

silverlight (and xna) awesomesauce in a bag

i didn’t have a chance to play with xna on wp7 much yet, but just knowing that support for xna is there is very exciting. xna is a fantastic platform to build games on, as it is approachable even for a beginning developer. my only complaint about xna is that there is no virtual keyboard support. i did verify by fiddling with it that the physical keyboard seems to be exposed in the xna api, though.

despite my complaints about the wp7 sdk, wp7 is going to be a game changer, and a huge hit for the developer community, i’m sure of it, simply because it allows you to leverage your existing c# or vb.net skills and prototype functional software on the device with beauty and finesse. heck, you can even leverage ruby skills for it. for some unknown reason, ironpython won’t run on it yet; i’m sure support for that will come before rtm, particularly given the volume of feedback for it.

but you could already?

actually, c# developers have been able to write windows mobile software quickly and easily for years, albeit not with silverlight nor with xna. windows mobile has lost the market share, consumer sales is now akin to linux’s market share on the desktop—about 2%. microsoft is going to have to work hard—harder than they have worked so far, from what i can see—at winning over people to the windows phone 7 away from the iphone, which now takes up a huge chunk of the mobile market share. they have to compete as well with the android which already sought to compete with the iphone, blackberry, and windows mobile, and is doing one incredibly good job at doing so.

frankly, looking at the iphone 3gs vs. nexus one (google phone) demos, i can’t help but look at the windows phone 7 and laugh at it. windows mobile 6 may have had the awful start menu , the most ridiculous interface ever to have been put onto a mobile device, but with that stupid start menu the platform also retained the “many apps and their icons” notion of an application playground which is strong in the iphone and android as well but not so easy to find in wp7. i have difficulty seeing how a marketplace would even work for wp7—will installed apps be categorized and the user would find their installed apps by category? surely wp7 will not just throw all apps into one giant vertical list, oh good grief, please tell me no!!

microsoft has also been alienating people who identify things based on icons rather than text. the live applications team have demonstrated this, for example, by dropping icons completely. in so doing, microsoft is also alienating the international communities. sure, text can be translated, but it doesn’t make a particularly great sell when the first impressions of an interface are of gobs and gobs of engrish text and you don’t speak engrish. meanwhile, many of us who do speak english still prefer attractive icons over avant-garde lower-case text headings. when you have five or so menu items in 72 point font size, it’s fine, but when you’re trying to find something among 200 others, nothing beats the simple icon. throwing away the simple icon on a grid won’t make this reality go away; this is not like a floppy drive, it is actually essential.

wp7’s minimalistic interface could actually end up being its downfall. they’re taking a huge chance and risk. i’m hopeful, but sadly slightly doubtful, that it will be enough to throw microsoft back into the playing field.

maybe i’m just not getting it. actually, microsoft’s new direction has had me scratching my head so much that i’m convinced that i’m still struggling to get it, and that actually all of my concerns are quite intentional for microsoft’s part.

this video demonstrates this quite well. microsoft wants to “start over” not just with their sdk but with deemphasizing standalone installed apps and reinforcing the notion of a phone whereby the many apps are not just active but are integrated with each other.

the only problem is, i don’t see such cross-app integration demonstrated in the sdk, at least not up front, not yet. also, why should i as a developer be excited about this new direction if the apps—my development efforts, and yours—are deemphasized in favor of prefab packaging?

overall, i’m both stoked and confused. this is an exciting time to delve into this new technology from microsoft. microsoft really needs to fill in some holes, though, and these holes are less technological than they are design.  their design and marketplace support strategies seem very vague.