the e4-rover mars challenge has come to an end.  the feedback and participation was outstanding.  thank you to everyone who played.  we introduced e4 to a lot of people this week.

the winner of the best client is jon dearden.  the runner-up is brian demers and we also announced three finalist: steen brahe/claus hoesrup, bryan hunt and steve robenalt .  jon wins the grand prize of a trip to los angeles for a tour of the nasa jpl robotics lab.   (as an aside, i really want to go too!!)  jon also wins a lego mindstorm nxt, $500 credit for amazon web services and a blackberry bold.    brian wins a $100 credit for amazon web services and blackberry cure.  all of the finalist will receive a phone too.

below is a screenshot of jon dearden’s client.   he did a great job using e4 to improve the look and usability of the default client. 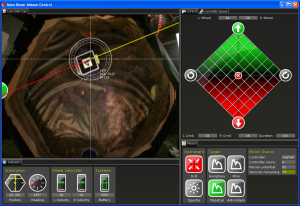 a lot of people need to be thanked for making the challenge a great success.   jeff norris, khawaga  shams, mark powell, michael wallick , boris bokowski, brian de alwis, benjamin cabe and lar vogel all did an amazing job helping to put together the contest.  lynn gayowski from the eclipse foundation spent the entire week helping people register and answering questions around the arena.  a big thanks to the sponsors nasa, lego and amazon for providing the resources and prizes to make the event a success!