MuleSoft's acquisition by Salesforce in March for $6.5 billion remains the largest acquisition to-date by the cloud computing behemoth. While the deal had some questioning why Salesforce would pay almost 22 times revenues, by and large, analysts were overwhelmingly positive about the deal.

Industry analysts like Ray Wang of Constellation Research theorized that the acquisition was about a "microservices future," while financial analysts like Michael Nemeroff of Credit Suisse posited that it was about "heterogeneous data environments."

There's some truth to both, as this Coca-Cola webinar demonstrates. Not only does their use case consist of integrating legacy data with more modern data sources, it also shows Coca-Cola's foray into a microservice-based architecture by creating several layers of APIs from its data sources using MuleSoft.

Although the consensus seems to be that the acquisition was mainly to take advantage of MuleSoft's API Management capabilities, a quick analysis of MuleSoft's customer reference stories (see Figure 1) shows that the majority of use cases involve integration of legacy data sources with Salesforce and providing a 360-degree view of their operations by using additional Salesforce products. 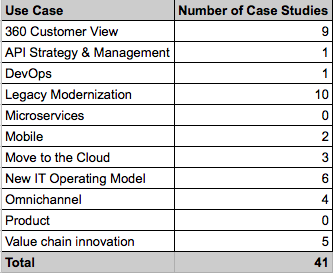 While there are some overlapping case studies in some of the categories, the number is so minute that the impact of double-counting does not take away from the fact integrating legacy data sources with Salesforce is the primary use case.

There's no doubt that MuleSoft's acquisition by Salesforce puts Informatica's partnership with Salesforce, specifically for its Informatica Cloud product line (now referred to as Informatica Intelligent Cloud Services) into jeopardy. According to Gartner's Magic Quadrant for Enterprise Integration Platform-as-a-Service, revenue for Informatica Intelligent Cloud Services in 2016 was $125 million, and about $190-$200 million in 2017. This represents growth rates of 40% from 2015 to 2016 and over 50% from 2016 to 2017.

On its face, comparing the Salesforce acquisition of MuleSoft (which was 21 times revenues), it would seem that if Informatica Cloud were a separate company, it would be worth anywhere from $4-$4.2 billion.

Here's where things get murky.

It is highly likely that a substantial portion of Informatica Cloud's revenues is derived from the Salesforce ecosystem, given that Informatica's first big push into the AWS ecosystem only came about in late 2014, and major initiatives with other cloud platform vendors, Microsoft Azure, and Google Cloud Platform followed much later.

In the $5.3 billion acquisition by the private equity firm, Permira back in 2015, both Salesforce and Microsoft joined as investors just prior to the deal closing, although it is not known what percentage of Informatica each company owned. Considering that Salesforce had announced its Analytics Cloud product (now rebranded as Einstein Analytics) only six months prior to the Permira acquisition announcement, it is quite possible that it viewed Informatica Cloud as an important ETL partner in helping it compete with the broader enterprise BI market.

Fast-forwarding to 2018 however, the fact that Salesforce spent $6.5 billion to acquire MuleSoft despite MuleSoft regressing in the standings for the 2018 Gartner Magic Quadrant for Enterprise iPaaS  gives us three key takeaways:

All three takeaways do not bode well for Informatica Cloud's growth within the Salesforce ecosystem.

A Potential Exit — Acquisition by Microsoft

Microsoft has been on a buying binge of late, with its $7.5 billion acquisition of Github on an estimated $300 million in revenues representing a 25X multiple.

Back in August 2016, Informatica stated that it expects its valuation to double to $10 billion by 2021, with a possible IPO in 2019. For this to take place, Informatica's overall revenues (not just revenues from its Intelligent Cloud Services) need to be much higher, as well as grow at a much faster rate than when Permira took it private in August 2015. While there is no information about Informatica's revenues ever since its last publicly reported figures for 2014 ($1.05 billion), during the 2018 Informatica World event, it was tweeted that the company spent $196 million in R&D amounting to 17% of revenue.

We can confidently surmise from this tweet that Informatica's total revenues for 2017 were approximately $1.153 billion. This would represent a revenue gain of about $103 million over 3 years, or an average growth of about 3.27% per year. Looking at past annual revenue figures for Informatica, the year-over-year revenue growth has certainly slowed down in the past three years when compared to the years preceding 2014.

What this means is that the bulk of Informatica's revenues are still tied to its on-premises ETL offerings. The larger takeaway is that the market for packaged ETL tools, whether in on-premises form or in the form of an iPaaS has a ceiling, and that ceiling is rapidly approaching for Informatica.

If we were to hazard a guess as to what disruptive force is hampering the growth of ETL tools, we need to look no further than Apache Spark. The recent alliance between Microsoft Azure and Databricks shows how eager Microsoft was to develop a joint product with Databricks and that it believes in Apache Spark adding immense value to Azure's data-related offerings such as Stream Analytics, Cosmos DB, and SQL Datawarehouse. The below demo by Databricks during a Microsoft Connect conference demonstrates how to do everything from data ingestion to joins - functions that disintermediate the value of ETL vendors like Informatica.

With the value of ETL tools quickly diminishing and two-thirds of economists forecasting a recession by 2020, the window is closing for Informatica (and its private equity owners, Permira) to create an exit strategy. Microsoft would be a very viable acquirer and it has shown that it is not afraid to spend billions of dollars buying technology companies that it considers as critical to its future as an enterprise cloud company.

What the right acquisition price would be is open to debate, and to hazard a guess, it would be interesting to take a look at some of the large pension funds who have Permira in their portfolio. Looking at CalPERS, the California Public Employees Retirement System, one can see the Investment Multiple of its previous Permira holdings, as well as the current Permira fund that contains Informatica, Permira V.

For a sale of this magnitude to happen, Informatica needs to realize that similar to how Salesforce uses MuleSoft to accelerate the integration of legacy data sources into Salesforce, Informatica needs to accelerate the offloading of legacy databases into Microsoft Azure. Informatica also needs to go a step further and help its customers accomplish a new way of doing ETL — through Databricks and Apache Spark because doing so would only result in more Azure usage — and that would get the attention of Microsoft while simultaneously helping Informatica leapfrog its current ETL competitors towards a healthy exit.