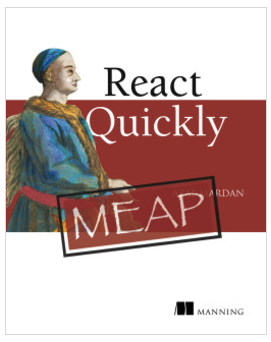 Save 37% off React Quickly with code fccmardan

Note: The source code for the examples in this article can be found in the ch04 folder of the GitHub repository azat-co/react-quickly. And some demos can be found at http://reactquickly.co/demos.

To be able to work with state, we need to know how to access the values, update them and how to set the initial values. Let's start with accessing state in React components.

The state object is an attribute of a component and can be accessed with  this  reference, e.g.,  this.state.name . We can access and print variables in JSX with curly braces  {}. Similarly, we can render  this.state  (as any other variable or a custom component class attributes) inside of  render().

For example,  {this.state.inputFieldValue} . This syntax is like accessing properties with  this.props.name.

Let's go ahead and try to implement a clock (Figure 1). The goal is to have a self-containing component class anyone can import and use in their application without having to jump through hoops every time. The clock must render the current time.

The structure of the Clock project is as follows:

I'm using Babel CLI with a watch  -w  and a directory flag  -d  to compile all source JSX files from  clock/jsx  to a destination folder  clock/js  and recompile on changes. Moreover, I’ve saved the command as an npm script in my  package.json  in a parent folder called  ch04  in order to run  npm run build-clock  from  ch04:

Obviously, time is always changing (for good or for bad). Because of that, we'll need to update the view using state. We name it currentTime and try to render this state as shown in Listing 1.

We'll get Uncaught  TypeError: Cannot read property ' currentTime ' of null. Normally, JavaScript error messages are as helpful as a glass of cold water to a drowning man. It's good that in this case JavaScript gives us a helpful error message. This one means we don't have any value for  currentTime. Unlike props, states aren’t set on a parent. We can't  setState  in  render()  either, because it'll create a circular (setState->render->setState...) loop and, in this case, React will throw an error.

You’ve seen that before using a state data in  render() , we must initialize it. To set the initial state, use  this.state  in the constructor with your ES6 class React.Component syntax. Don't forget to invoke  super()  with properties, otherwise the logic in parent ( React.Component ) won’t work.

Developers can add other logic when setting the initial state. For example, we can set the value of currentTime using new Date(). We can even use  toLocaleString() to get the proper date and time format in the users location:

Hopefully, the TC39 (people behind the ECMAScript standard) will add attributes to the class syntax in future versions of ECMAScript! This way, developers can set state not only in constructor, but in the body of the class:

The proposal is called class instance fields or class properties, but as of July, 2016 it's only available with transpilers: Babel, Traceur, or TypeScript, which means no browser will run this feature natively. Check out the current compatibility of class properties in ECMAScript Compatibility Table.)

Here,  curentTime  is an arbitrary name, and we'll need to use the same name later when accessing and updating this state. You can name your state any way you want if you refer to it later using this name.

The state object can have nested objects or arrays. Look at this example, where I add an array of my books to the state:

>> With React's own  createClass()  method to define a component, you'll need to use  getInitialState() . <<

This will only get us the first value, which becomes outdated quickly; in one second. What's the point of a clock that doesn’t show the current time? Luckily, there's a way to update the state.

We change the state with  this.setState(data, callback)  class method. When this method is invoked, React merges the data with current states and calls  render(). After that, React calls  callback.

Having the callback in setState() is important because the methods work asynchronously. If you're relying on the new state, you can use callback to make sure this new state is available. If you rely on a new state without waiting for  setState()  to finish its work, i.e., working synchronously with asynchronous operation, then you might have a bug when the state is still an old state.

We've rendered the time from a state, we also set the initial state, but we need to update the time every second, right? We can use a browser timer function <code>setInterval()</code> which will execute the state update every n milliseconds. The  setInterval() method is implemented in virtually all modern browsers as a global, which means developers can use it without any libraries or prefixes.

To kick-start the clock, we need to invoke  setInterval()  once. We can create a method  launchClock()  to do that. We'll call  launchClock()  in constructor. The final Clock might look like the one shown in Listing 3.

You can use  setState()  anywhere, not only in  launchClock()  (which is invoked by  constructor ), as shown in the example. Typically,  setState()  is called from the event handler or as a callback for incoming data or data updates.

>>Changing a state value in your code like this  this.state.name= 'new name't won't do any good. It won't trigger a re-render and a possible real DOM update, which we want. For the most part, changing state directly without  setState  is an anti-pattern and should be avoided.<<

It's important to note that  setState()  updates only the states that you pass it (partial or merge, but not a complete replace). It's not replacing the entire state object each time. If you have three states and then change one, the other two remain unchanged. In the example below,  userEmail  and  userId  will remain intact:

If your intention is to update all three states, then you need to do it explicitly by passing the new values for these states to setState(). Another method sometimes seen in old React code, but which no longer works and was deprecated, is  this.replaceState() method. As you can guess from the name, it replaced the entire state object with all its attributes.

Keep in mind that  setState()  triggers render(). It works in most cases. In some edge-case scenarios, when the code depends on external data, you can trigger re-render with  this.forceUpdate(), but this approach should be avoided because it relies on external data, rather than the state, making components more fragile and dependent upon external factors (tight coupling).

As mentioned before, you can access the state object with  this.state. If you remember, we output values with curly braces ( {} ); therefore, to declare a state property in the view (render's return statement), apply  this.state.NAME .

React magic happens when you use state data in the view (for example, to print, in if/else, as a value of an attribute, or as a child's property value) and then give  setState()  new values. Boom! React updates the HTML for you. You can observe it in your DevTools console. It should show cycles of  updating...  and then  rendering...  And, the best part is that ONLY the minimum required DOM elements are affected.

Binding this in JavaScript

If you're using ES6+/ES2015+ as I do here in this article, then you can use fat arrow function syntax to create a function with an autobinding:

Autobinding means that the function created with a fat arrows will get the current value of  this  which is, in our case,  Clock.

The manual approach is to use  bind(this)  method on the closure:

This behavior isn’t exclusive to React. The this keyword mutates inside a function's closure, and we need to either bind it or save the context ( this ) value for later use.

Typically, we'll see variables like  self ,  that , or  _this  used to save the value of the original this. Most of you probably saw statements like the following:

The idea is straightforward; you create a variable and use it in the closure instead of referring to  this . The new variable won't be a copy, but a reference to the original  this value. Here's our  setInterval():

We have our clock and it works (Figure 2). Tadaaa!

Figure 2: The Clock is Ticking

One thing before we move on. You can see how React is reusing the same DOM <div> element and only changes the text inside it. Go ahead and use DevTools to modify the CSS of this element. I added a style to make text blue:  color: blue  as shown in Figure 3. It created an inline style, not a class. The element and its new inline style stayed the same (blue) as the time kept on ticking. 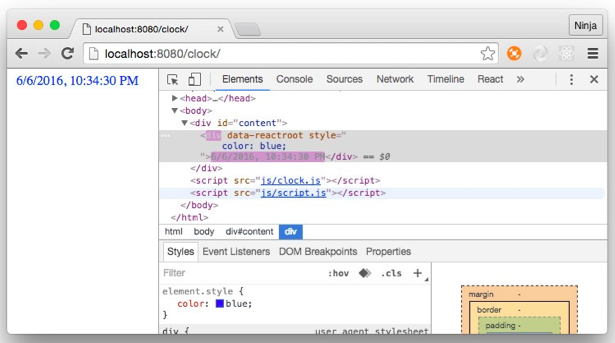 Figure 3: React is updating time as only text, not the element div (manually added color: blue)

React will only update the inner HTML (the content of the second <div> container); <div>and all elements on this page, remain intact. Neat. ;-)

States and properties are both attributes for a class, meaning they’re  this.state  and  this.props. That's the only similarity! One of the main differences between properties and state is that the former is immutable and the latter is mutable.

Another difference between properties and states is that we pass properties from parent components, as we define states in the component itself, not its parent. The philosophy here is that you can only change the value of a property from the parent, not the component itself. Properties determine the view upon creation and then they stay static (they don't change). The state, on the other hand, is set and updated by the object itself. 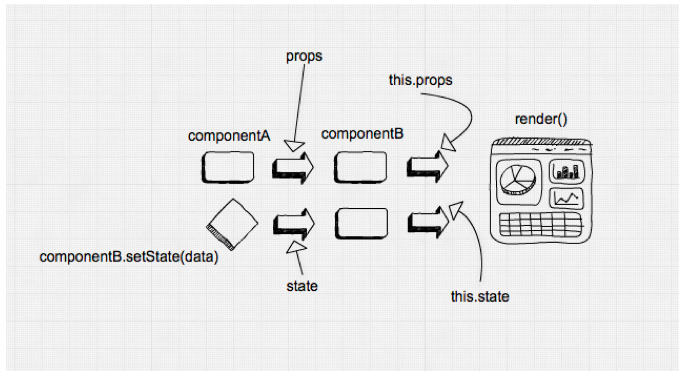 Figure 4: New values for props and states can change the UI, but for props the new values come from a parent and for state from the component itself

Not all components need to have state. Let’s take a look at how to use properties with stateless components.

The benefit of using stateless components is they’re predictable, because we’ve one input which determines the output. Predictability means they’re easier to understand, maintain, and debug. In fact, not having a state is the most desired React practice—the more stateless components you use and the less ‘stateful’ they are, the better.

This Hello World is a good example of a stateless component (listing 4).

Yes. You can use ES6+/ES2015+ arrow functions for stateless components. The following snippet is analogous to the snippet above (return can be omitted too, but I like to have it):

There’s no need for autobinding, but we can use the fat arrows function syntax for brevity (when there's a single statement, the notation can be a one-liner):

In a stateless component, we can't have a state, but we can have two properties:  propTypes  and  defaultProps. We set them on the object:

We also can't use references  refs  with stateless functions. If you need to use  refs , you can wrap a stateless component in a normal React component.

That’s all for this article, for more on React and its myriad of uses, download the free first chapter of React Quickly and use code fccmardan to save 37% off your purchase.