Which got me thinking about how useful it is when a tool works "right of of the box" and how disappointing it can be when it doesn't.

In his book "Diary of a Wimpy Kid, The Last Straw,"[1] author Jeff Kinney has the main character, angst-ridden middle school student Greg Heffley, finds an ad for "personal hovercraft" in a comic book. Greg imagines himself as the coolest kid in school if he could get his own hovercraft, so he sends all his saved-up money away for one. He is, of course, disappointed when he opens the box and finds not a functioning personal hovercraft, but the plan to build one.

Step one in the plan reads: "Acquire an industrial twin-turbine engine."

In contrast, the SOA Platform provides an extensive set of actions[2] that work right out of the box. The SOA Platform also supports the creation of custom actions, but, when you are designing how your application will make use of the Platform, the place to start is the out-of-the-box actions. These have all been tested so you can depend on the results they will achieve, and they've also been documented and illustrated in the quickstart sample programs. (On a personal note, my introduction to the SOA Platform included my spending several hours building an action, when an out of the box action for the same task already existed!)

The out-of-the-box actions implemented in the SOA Platform are divided into the following functional groups:

(There's also a Miscellaneous group that includes only one action - org.jboss.soa.esb.actions.SystemPrintln. This action prints of a message.) 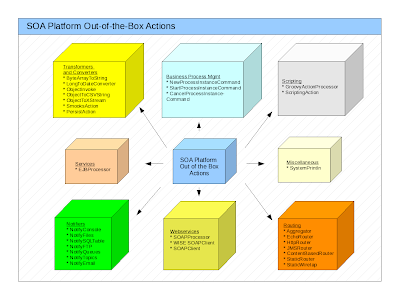 Let's take a quick look at all of these actions, and then a more in-depth look at a couple of them.

These actions are needed to enable services that expect data in different forms to communicate with each other. What transformers and converters do is to translate message payloads into different forms. Let's stop for a minute and review the contents of messages as they are passed over the JBossESB in the SOA Platform. Messages implement the org.jboss.soa.esb.message.Message interface. From the point of view of a service, the data in a message, in other words, the message "payload" consists of the message body plus attachments and properties. The default way for an action to get or set a message payload is the MessagePayloadProxy utility class. This class is important as it provides a standard way to get the message payload.

The actions in the Transformers and Converters actions group (yes, the names are pretty self-explanatory) are:

This action group contains only one out of the box action (org.jboss.soa.esb.services.jbpm.actions.BpmProcessor), but that one action supports the JBossESB - jBPM integration in the SOA Platform. This integration enables your services to make calls into a jBPM process through the jBPM Command API. Of the commands in the command API, the following (3) are available for use from ESB:

But, this is only part of the JBossESB - jBPM integration. The integration also supports the orchestration of services from jBPM processes. For a fuller description of the integration, see: http://jboss-soa-p.blogspot.com/2009/06/hanging-together-on-soa-platform.html

This group of actions makes it possible for you to create custom actions using scripting languages. As of release 4.3 of the SOA Platform, scripting actions in Groovy and Bean Scripting Framework (BSF) are supported.


Both these actions accept the message payload and configuration data such as a Log4J logger as variables for the script that is executed by the action. In addition, they both support having scripting contained within the message itself.

There's only one action in this group, but it's an important one.

One of the major tasks that the JBoss ESB in the SOA Platform performs is the routing of messages to services. (Remember that in an ESB, everything is either a message or a service.) In an earlier post, I described how to use JBoss Rules to perform content based routing (CBR), where the content of an incoming message determines its routing. The full set of routing actions are:

There are (3) out of the box actions that support web services:

We've already walked through how to use some of the out of the box actions (Business Process Management, Routing, Notifiers) in earlier posts to this blog. Now, let's look at some examples of other types of out of the box actions. As always, the "quickstart" programs in the SOA Platform provide the example code.

We'll start by looking at transformations and the SmooksAction out of the box action. But first, let's take a look at Smooks. It's common to refer to Smooks as a transformation engine, but that's not the full story. Smooks is really a more general purpose processing framework that is capable of dealing with with fragments of a message. Smooks accomplishes this with "visitor logic", where a "visitor" is Java code that performs a specific action on a specific fragment of a message. This enables Smooks to perform different actions on different fragments of messages. As is stated by the Smooks project[10]:


The SOA Platform SmooksAction out-of-the-box action provides you access to all these Smooks capabilities.

Let's look at a very simple example, the aptly named "transform_XML2XML_simple" quickstart. This quickstart performs a message transformation by applying an XSLT (EXtensible Stylesheet Language Transformations) to an XML message. The message is transformed into XML in a different form. The interesting parts of the quickstart's jboss-esb.xml file are: 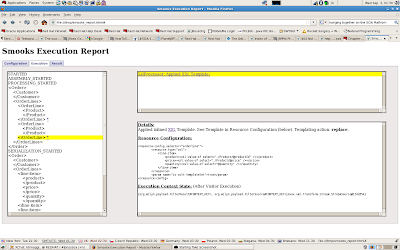 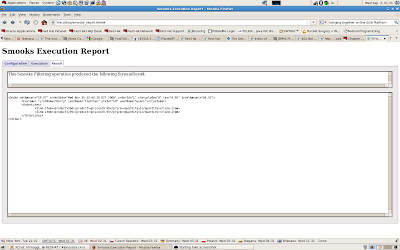 Now, let's look at smooks-res.xml:
When you run this quickstart, you'll see the XML message as defined in SampleOrder.xml displayed before and after it undergoes the XSLT transformation.

We'll look first at the webservice_producer quickstart. This quickstart demonstrates how to expose a JSR181 web service endpoint on the JBossESB within the SOA Platform by using the org.jboss.soa.esb.actions.soap.SOAPProcessor action.

Let's begin by looking at these lines in jboss-esb.xml:

(Remember how we talked about having to write a "service wrapper webservice" that conforms to the JSR 181 ("Web Services Metadata for the Java Platform") standard? You do this by adding @WebService and @WebMethod annotations.)

The following lines in jboss-esb.xml are tangential to the goal of demonstrating exposing the webservice endpoint. But it is interesting as is shows some of the paths and protocols that can be used to inserting a message into the JBossESB withing the SOA Platform:

The last quickstart we'll look at is webservice_consumer1 - as you can guess by its name, this quickstart demonstrates how to access (or "consume") a JSR181 Web Service in an ESB action by using the org.jboss.soa.esb.actions.soap.SOAPClient action.

This quickstart requires that a web service be deployed for the SOAPClient to access. The webservice is very simple and is deployed in a .war. In HelloWorldWS.java we see the definition of the web service:

Pay attention to the "toWhome" parameter. We'll look for this in the web service request.

In MyRequestAction.java, we see that toWhome parameter added as the key in a hashmap for the msg body:

Then, MyResponseAction.java retrieves the message and displays the response - see lines 54-55:
In jboss-esb.xml:

It can be daunting to attempt to create a new service based application from scratch. The SOA Platform's combination of out-of-the-box actions and quickstart can make this task much easier. Even without a jet turbine engine. ;-)

[1] Kinney, Jeff, Diary of a Wimpy Kid, The Last Straw, Amulet Books; 1st edition (January 2009), ISBN-10: 0810970686, ISBN-13: 978-0810970687
[2] http://www.redhat.com/docs/en-US/JBoss_SOA_Platform/4.3.GA/html/Programmers_Guide/chap-SOA_ESB_Programmers_Guide-Out-of-the-box_Actions.html
[3] http://xstream.codehaus.org/
[4] http://www.smooks.org/mediawiki/index.php?title=Main_Page
[5] http://www.milyn.org/javadoc/v1.0/smooks/org/milyn/container/plugin/PayloadProcessor.html
[6] http://www.enterpriseintegrationpatterns.com/Aggregator.html The patterns described at this site and in the corresponding book were created to assist designers and implementers in creating enterprise software solutions. The patterns are platform and language agnostic, so they can be very helpful across many systems.