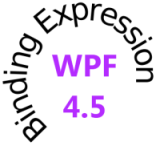 BindingExpression is a useful API when working with Bindings from code. In WPF 4.0 it lacks some information which would have made it even mode helpful. Let’s discover what WPF 4.5 brought with him on this class.

For the record, this post is a part of a series about WPF 4.5 new features.

The MSDN page on WPF 4.5 new features sum-up very well what API has been added. So I will only explain a little more what it means and try to define in my own way the key terms.

What is a Binding?

Let’s tell that we have the Text property of a TextBlock binded to the Name Property of ViewModel.

Then in this case you will have several elements defined by the Binding:

Then we have to define the notion of ‘BindingGroup’ which is a way to create relationships between Bindings.
The goal is to be able to create ValidationRules for a group of properties instead of validating them one at a time.
You define a BindingGroup on a Panel and the controls inside of it are, excepting some case, a part of it. The Panel on which the BindingGroup is defined is known as the BindingGroup owner.

The BindingGroup class exposes then some method to manage the binded object state : BeginEdit, CommitEdit, CancelEdit. You can think of it as a way to perform the same feature as the IEditableObject.

Here is the MSDN example on how to define a BindingGroup from the XAML:

If you want more information on the BindingGroup, you can read this two posts:

How to retrieve the Binding Expression ?

The Binding expression is an object which contains information about a Binding.

To retrieve it, you have to know two things: the target property and the target object. Then you can call a static method from the BindingOperation class named ‘GetBindingExpression’ as in the following snippet:

Since WPF 4.5, the following property have been added to the BindingExpression class: