that was a particularly good wwdc this year, wasn’t it? with lots of possibly transformational technologies introduced, it’s going to be very interesting indeed to see how they play out!

we’ll explore those in more depth later on, but for now, let’s sort out some resource links and initial reactions.

first up, you want to go download the unofficial wwdc app for macos :

isn’t that pretty ? definitely your wwdc video viewing app of choice, we say!

next, address this problem: 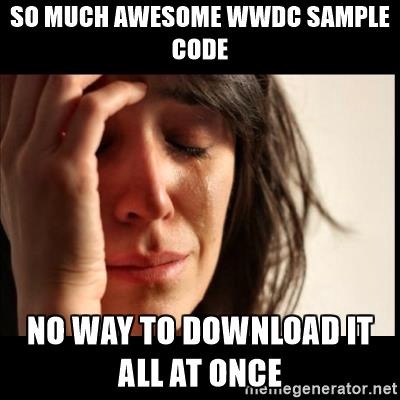 with t he wwdc-downloader script over at github.

(and while that’s all downloading for your next transcontinental plane flight or whatever, have your heart warmed with wwdc17 scholarship winner kenny batista sharing his experiences at apple’s big week for developers !).

if you want to prioritize a bit, here’s a wwdc 2017 viewing guide that looks solid.

there’s enough interesting new technologies that they each deserve a roundup post as there’s going to be a lot of figuring out there to keep track of, so for now, we’ll just link a couple overviews hitting the highest points:

also, check out their article new hevc & heif media formats: what you need to know and begun, the codec war has for background on the fur that’s no doubt going to be flying all over about that soon.

oh, and we’ll put an in-depth look at the new app store and new rules following wwdc 2017 here, too — there are some interesting changes there you want to be aware of. most notably to us, that finally the new ios app store lets devs choose whether or not to reset ratings when updating !! woo-woo-woohoo!

and as always, over at mjtsai.com , you can find a near-canonical list of wwdc 2017 links for deeper diving!

Published at DZone with permission of Alex Curylo. See the original article here.