In this blog post, we're going to lay the basis for future posts about Xamarin Forms. We'll explore briefly what's Xamarin Forms and why it's so powerful. Then we'll talk about .NET Standard and we'll understand why it's a very big achievement for the .NET ecosystem.

Xamarin Forms is an API to develop cross-platform apps for iOS, Android, and Windows from a single shared C# codebase. It's not a one-size-fits-all technology, but it's very useful when code sharing is more important than a custom UI for every platform. If we are Windows developers, we'll love Xamarin because it allows us to reuse all our hard-earned skills like XAML, binding, MVVM, and so on. If we need device-specific features, we can access them, too.

Before getting started, make sure you've run the Visual Studio Installer and have upgraded to the latest stable release of Visual Studio. At the time of this writing, I have this setup: 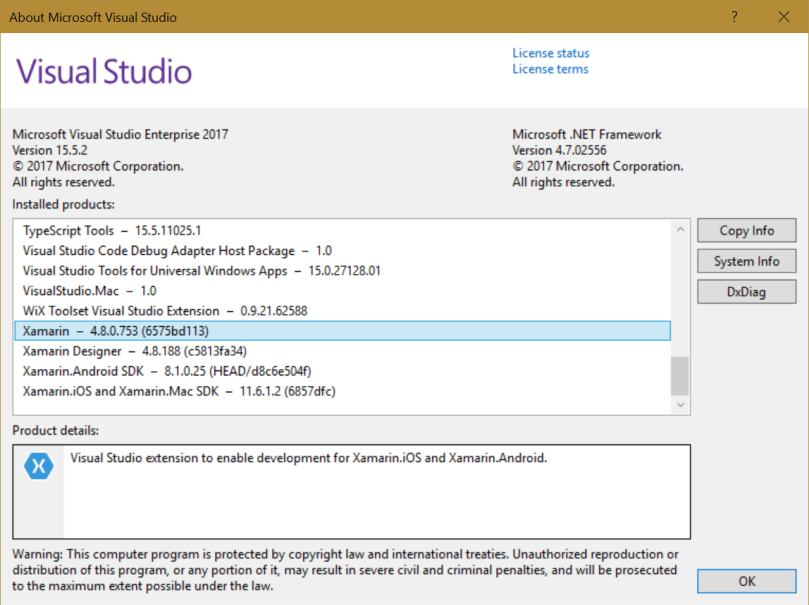 The first step to creating a cross-platform Xamarin Forms app is to create a new project with Visual Studio.

When we press OK, a new window appears. We choose blank-app as a template, Xamarin.Forms as the UI Technology, and .NET Standard as the Code Sharing Strategy (read here about Shared Projects).

When we hit OK, Visual Studio works for a while and prepares a new solution for us.

Anatomy of a Cross-Platform Solution

The new solution is composed of four projects:

We choose our favorite Android Virtual Device (AVD - I created a custom configuration) and then we press Play/Run.

After compiling and launching the AVD, Visual Studio will deploy and run the app.

We can do the same thing with the other two device-specific projects. Keep in mind that to build the iOS Project you need a Mac on your network.

In this post we created a Xamarin Forms Project with the Visual Studio template, we learned the purpose of Xamarin Forms and .NET Standard. Now we have the basics to develop the app of our dreams.

In the future posts, we'll evolve this app introducing MVVM and other concepts.