Glad to announce a new version of XCFit with brand new features. You can find release notes on GitHub here. If you are new to XCFit then XCFit a.k.a (XCUI, Cucumberish, and FitNesse Integrations Tests) is a full stack Xcode BDD framework for Swift iOS and macOS apps. XCFit allows us to write API level, UI and Acceptance Tests with Swift in human readable language using tools like Cucumber and FitNesse in Xcode.

We can still use Apple’s brand new UI Testing framework (XCUI) under the hood of Cucumberish. XCFit is a fully automated solution for Cucumberish and FitNesse. You can use 80(FitNesse):20(Cucumberish) formula to automate Acceptance and UI Testing for better coverage and faster feedback. XCFit is available on RubyGem, CocoaPods, and Swift Package Manager.

XCFit uses a number of open source projects to work properly. You need to have following

You must have Mac Operating System with OSX/MacOS version > 10.9

In order to get started, We need to install XCFit from RubyGems. This will set our Xcode for BDD.

You need to use with ‘sudo’ if you are using system (pre-installed) Ruby(2.0). XCFit gem will be used to set all the Xcode Templated for Xcode 8 as well Xcode 7

Now that you can execute ‘xcfit’ command from your terminal/iTerm, etc., etc. Example Output

Later, we need to install XCFit from CocoaPods to enable Cucumberish and Fitnesse test. We can also get XCFit from Swift Package Manager if we need to have additional helpers for the XCUI test framework.

In existing app or brand new app, we have to enable the Xcode templates for targets to speed up the things.

To setup Templates for Xcode 8.

To setup Templates for Xcode 7.x. 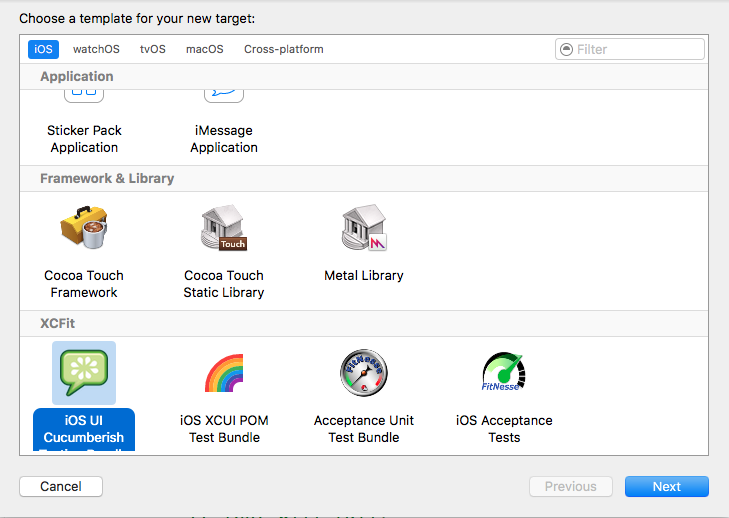 What’s in the Cucumberish Template?

What’s Not in the Cucumberish Template

Here is how to do it.

Getting Cucumberish Into Our Target

In order to get Cucumberish source content. There are few ways we can do that

You can do that easily.

Note There is issue with Cocoapods when you have 'use_frameworks!', it will not import header files and build will fail. If you are not using Frameworks in th Podfile then this approach is OK.

Here is how to set up everything in a minute !

Now in the Carthage/Checkout directory has Cucumberish. Just add that to target or workspace.

Please choose one of the suitable options for you.

We now have everything we needed to run demo Cucumber demo test. Update Scheme if you don’t want to run unit tests or other types of tests. and press ‘CMD+U’

Congratulations !! You have just run your first Cucumber BDD Scenario in the Xcode. Now add your own.

XCFit adds ‘Cucumberish’ target to existing Scheme. You can remove that target and run separate scheme to keep it independent from Unit tests. Make sure you make the new scheme executable for Running.

Now, we have seen that it’s fairly easy to setup BDD Style tests with Cucumberish but some people don’t want that overhead of adding an extra layer of Gherkin. XCFit gives an option to use the very popular Page Object Pattern with Apple’s Xcode UI Testing framework.