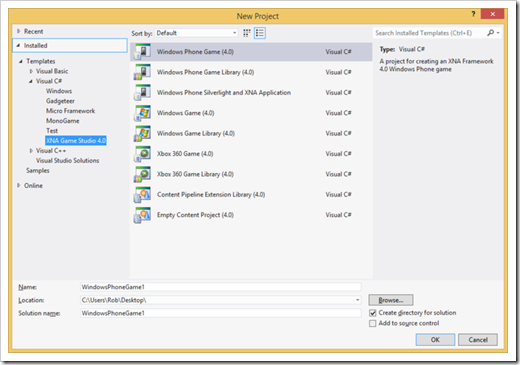 I've mentioned this before, but I think it is worthy of mention again (since I've just done it and it works really well). If you are running later versions of Visual Studio (2010, 2012 or 2013) you can now get XNA goodness onto your machine really easily....

We released XNA Game Studio Extension for Visual Studio 2012/2013 as a VSIX package. This extension is also available on Visual Studio Gallery.

We are looking for programmers to make new release which will support DirectX 11.

XNA Game Studio, XNA Logo are trademarks of Microsoft Corporation in the U.S. and/or other countries.

Nice to see this continue to get interest and that the VS2013 support is now available too.

Related Past Post XRef:
Community Driven XNA Game Studio Installer for VS 2012 and soon VS 2013