XSS - or cross-site scripting - is one of the most common vulnerabilities in web applications. It has been on the OWASP Top 10 list (the list of the most critical security risks to web applications) for a while now. So let's figure out together how your browser can acquire and execute a script from a third-party website, and what this may lead to (spoiler: your cookies could get stolen, for example). And while we're at it, we'll talk about ways you can protect yourself from XSS. 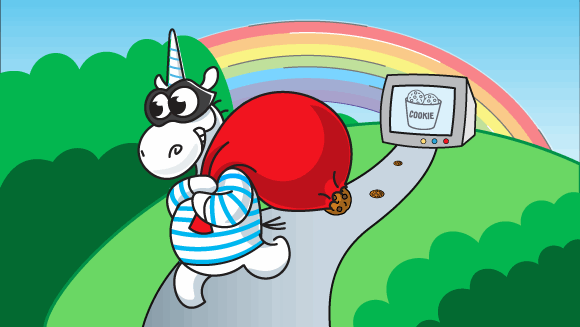 Cross-site scripting (XSS) is a way to attack web systems. An intruder embeds malicious code into a web page. This code interacts with the intruder's server. The code is usually executed in a user's browser, as a web page is rendered, or, less frequently, after the user performs certain actions. Usually, everything an intruder needs you to do is to open a web page with the embedded malicious code - and the intruder can take advantage of the XSS vulnerability. This is one of the reasons why, as I am writing this article, XSS is number 7 on the 2017 OWASP Top 10 list (a list of the most dangerous vulnerabilities in web applications).

To conduct an XSS attack, one needs to do the following:

Now let's take a look at a sample XSS attack.

Let's start at the beginning. How can one embed code into a web page? The first approach I can think of is to use the GET request parameters. Create a sample web page with the following logic:

Now check that everything works. Open the page with the xss parameter empty:

Assign the Not empty 'xss' parameter value to the xss parameter and open the page:

The page displays the strings correctly. And now to the interesting part! Pass the following string as the xss parameter: <script>alert("You've been hacked! This is an XSS attack!")</script>.

As you open the page, the code from the parameter is executed and you can see a dialog window with the text passed to the alert method: 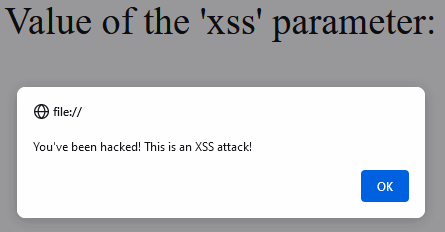 Now you can link the embedded code to an intruder's web server. In my example, a web service written in C# mimics this web server. The code of the web service's endpoint is as follows:

To access this web service, pass the following string as the xss parameter:

You can test this behavior. Open the page. It displays nothing but the standard message - Value of the 'xss' parameter:

However, in the developer tools, the 'Network' tab displays a message that a request to the https://localhost:44394/AttackerEndPoint web service has been sent:

All that's left is to make this code malicious. From the little experience I've had with web programming, I know that the browser sometimes stores user identification tokens for several websites or web applications. Here's how this works:

To make the code executed on the page malicious, I decided to change the page's code. Now when the page is opened, the USER_VERY_SECRET_TOKEN string is saved to the browser's local storage. The data is accessible via the SECRET_TOKEN key. This is the modified page code:

Now all that's left is to pass the malicious code as the xss parameter in the GET request. The code gets access to data in the local storage and sends it to the web service. To do this, I'll pass a string as the parameter:

In URL, the '+' sign has a special role, so I used its encoded version instead: %2b.

Now you can check that everything works as expected.

Just as before, we can see only one message in the middle of the page: Value of the 'xss' parameter:. Now check that the code was executed, and the web service got a request where the stolenToken value was equal to USER_VERY_SECRET_TOKEN:

Most users wouldn't have noticed the script's execution when opening the page, because the page does not indicate it in any way. Make sure that the web service got the stolen token. The stolenToken variable contains the USER_VERY_SECRET_DATA value. So, consequently, the web service stored it to the StolenTokenResult.txt file. Congratulations, your XSS attack was successful.

In this example, I passed malicious code to a request directly, as a request parameter. In real life, intruders mask links that contain malicious code (for example, they use an app that shortens links) and email them to a user (posing as a web site's technical support manager or administrator) - or will publish it on a third-party website. Clicking on the masked link, a user opens a web page, thus starting a malicious script in a browser. Meanwhile, the user does not suspect anything. After the user executes the script, the attacker gets a token and can use it to access the user's account. This way the attacker can steal confidential data and perform malicious actions on behalf of the user.

After looking into XSS attacks and how they occur, let's dive into theory a bit and discuss types of XSS attacks:

Considering the fact that this article's most likely reader is a developer, I should also talk about ways one can avoid making XSS vulnerabilities when writing code. Let's dive in.

Since I am a C# developer, I'll review ways to secure your C# code against XSS attacks. However, discussing a particular language does not affect the general theory. Thus, the approaches I describe below apply to almost any programming language.

The first way you can secure your code from XSS vulnerabilities when developing is to use features of a web framework. For example, the ASP.NET C# framework, in .cshtml and .razor files, allows to mix HTML markup and C# code:

This file displays the result of the Model.RequestId C# expression. For this file type to compile successfully, C# expressions or code blocks must start with the '@' character. However, this character does not simply allow to use C# along with the HTML markup in one file but also directs ASP.NET to encode HTML characters into HTML entities if a code block or an expression returns a value. HTML entities are text fragments ("strings") that start with the ampersand character (&) and end with a semicolon (;). Entities are most often used to represent special characters (that can be perceived as part of HTML code) or invisible characters (such as a non-breaking space). This way ASP.NET helps developers avoid creating XSS vulnerabilities.

However, developers need to pay special attention to files with the .aspx extension in ASP.NET (an older version of files for HTML pages supporting C# code). This type of file does not automatically encode the results of C# expressions. To encode HTML characters returned by C# expressions in these files, place C# code in the <%: %> code block. For example:

The second option is manually encoding HTML characters into HTML entities before displaying data on the web page. This way, special encoder functions are used. C# provides special methods to do this:

Since HTML symbols are encoded, the browser does not execute malicious code and just displays it on the web page. Encoded symbols are displayed correctly.

Let me demonstrate this security approach on the XSS attack we created earlier. There is one problem though: I could not find a function in Java Script that encodes HTML symbols into HTML entities. However, on the Internet, I found a way to write such a function quickly and easily:

To write this function, I used the Element.innerHTML property's special features. You can use this function on the HTML page from the XSS attack example:

Here we encode the xss parameter value with the help of the htmlEncode function before the value is displayed on the web page.

Now let's open this page and pass the following string as the xss parameter: <script>alert("You've been hacked! This is an XSS attack!")</script>:

As you can see, when encoding a string that contains a script, the browser displays this string on the page and does not execute the script.

The third way to protect data is to validate data received from users or from an external source (an HTML request, a database, a file, etc). For such scenarios, a good approach is to use regular expressions. You can use them to catch data that contain dangerous characters or expressions. When the validator detects such data, the application displays a warning and does not send the data for further processing.

As you can see from the example above, even the simplest web pages can have XSS vulnerabilities. Now imagine how many opportunities for XSS there are in projects that consist of tens of thousands of lines of code. With this in mind, automated tools that search for XSS vulnerabilities have been developed. These utilities scan the source code or access points of websites or web applications - and produce a report about the vulnerabilities found.

If it so happened that you did not pay much attention to protecting your project from XSS, not everything is lost yet. To search websites and web applications for vulnerabilities, many XSS scanners were developed. You can use them to find the most known vulnerabilities in your projects (and not only in yours, because some scanners do not need access to source code). Such scanners can be free or paid for. Of course, you can try to write your own XSS vulnerability detection tools, but they are likely to be less effective than paid tools.

The most logical and cheapest way to look for vulnerabilities and fix them is to do this at the early stages of development. XSS scanners and static code analyzers can help with this. For example, in the context of C# development, one of these static analyzers is PVS-Studio. PVS-Studio got the V5610 new diagnostic just recently. It looks for potential XSS vulnerabilities. You can also use both types of tools because each of them has its own area of responsibility. Thanks to these tools you can find existing vulnerabilities in your project, as well as possible future vulnerabilities.

XSS is an unusual and pretty nasty vulnerability in web security. In this article, I listed only one example of an XSS attack. In reality, there are many varieties of XSS attacks. Each project may have unique and well-known XSS vulnerabilities that intruders may exploit. To find vulnerabilities in a ready project, or if you do not have access to a project's source code, think about using XSS scanners. For preventing XSS vulnerabilities during development, use static code analyzers.

P.S. To get a little bit of experience with XSS (for educational purposes) I suggest you try this Google's game dedicated to XSS.

Published at DZone with permission of Valery Komarov. See the original article here.