consider a domain, for example an online bookshop project that we call buycheapbooks. the ubiquitous language for this domain would talk about book, category, popularity, shoppingcart etc.

from scratch, coding this domain can be quite fast, and we can play with the fully unit-tested domain layer quickly. however if we want to ship, we will have to spend several times more effort because of all the extra cross-cutting concerns we must deal with: persistence, user preferences, transactions, concurrency and logging (see non-functional requirements ). they are not part of the domain, but developers often spend a large amount of their time on them, and by the way, middleware and java ee almost exclusively focus on these concerns through jpa, jta, jmx and many others.

logging is the core domain of log4j , and it must itself deal with cross-cutting concerns such as configuration. 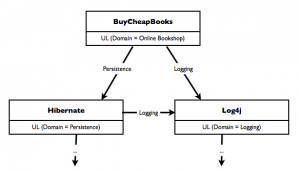 in this perspective, the cross-cutting concerns of a project are the core domains of other satellite projects, which focus on technical domains.

hence we see that the very idea of core domain vs. cross-cutting concerns is essentially relative to the project considered.

for projects that target end-users, we usually tend to reuse the code that deals with cross-cutting concerns through middleware and apis, in order to focus on the usually business-oriented domain, the one that our users care about. but when our end-users are developers, the domain may well be technical.