Getting Started With Distributed SQL

In recent years, NoSQL distributed databases have become common, as they are built from the ground up to be distributed. Yet they force difficult design choices, such as choosing availability over consistency, data integrity, and ease of query, to meet their applications’ need for scale. This Refcard serves as a reference to the key characteristics of distributed SQL databases, how functionality compares across database offerings, and the criteria for designing a proof of concept.

Developers building mission-critical applications that require data integrity, high read/write throughput, and 24/7 global availability with little or no downtime or maintenance windows require a new type of database. Older relational systems fail to meet these needs in terms of scalability, availability, resilience, or performance under load. NoSQL databases do not offer the robust functionality, standard query language, or transactional integrity required for systems of record.

This Refcard aims to acquaint you with distributed SQL database technology, how it works, the problems and types of applications it solves, and how to evaluate different offerings.

Example use cases include:

Distributed SQL databases are distinct from some other types of nontraditional relational databases. For instance, Amazon Aurora and Google Alloy allow only a single writer with many replicas or two writers (multi-master) with no additional replicas. Aurora relies on shared storage for reliability and scalability. The term "NewSQL" was previously used to be more inclusive of other types of databases, including in-memory databases like VoltDB. While keeping all or most data in memory can lead to lower latency and is good for specialized use cases, it is not cost effective for applications at a greater level of scale. Some NewSQL databases are actually analytical stores whereas distributed SQL databases are primarily transactional.

Distributed SQL databases use a hashing algorithm to assign writes to different units called partitions (or slices in some databases). Figures 1 and 2 show how those partitions are distributed among multiple compute nodes such as VMs, containers, or physical hardware. Each partition is replicated to at least two nodes (generally more). While this shares some similarity with partitioning or sharding in non-distributed databases, it is automatically assigned by hash rather than value ranges and automatically balanced by the database rather than operator intervention.

When a client reads from a distributed SQL database, the database computes the hash and selects one or more nodes to surface the requested data. Likewise, queries may also be similarly distributed among multiple nodes in the database. Because data is distributed, reads can pull from multiple storage devices at the same time. In order to ensure data is consistent when written or updated, the database uses a type of distributed transaction protocol similar to two-phase commit. Modern distributed SQL databases primarily use a consensus algorithm such as Paxos or Raft. These protocols coordinate membership in the cluster along with ensuring that data is written to the correct nodes in order to guarantee data consistency and reliability.

Distributed SQL databases work best in the cloud if replicas are distributed among cloud availability zones (or different racks in private data centers). In the event a zone or region becomes unavailable, a new leader is elected in one of the remaining zones or regions. Data is copied from surviving replicas to existing nodes to maintain fault tolerance and data distribution (see Figures 3 and 4). If new nodes are added, the data is rebalanced among the new nodes, increasing distribution and performance.

Some databases support distributing replicas or partitions across geographic regions. This significantly increases latency and impacts overall performance. To address this, an eventually consistent latency-tolerant replication protocol is used across data centers.

Distributed SQL databases use a relational model, in which:

As with some traditional relational databases, the underlying storage may be substantially different than what is represented: 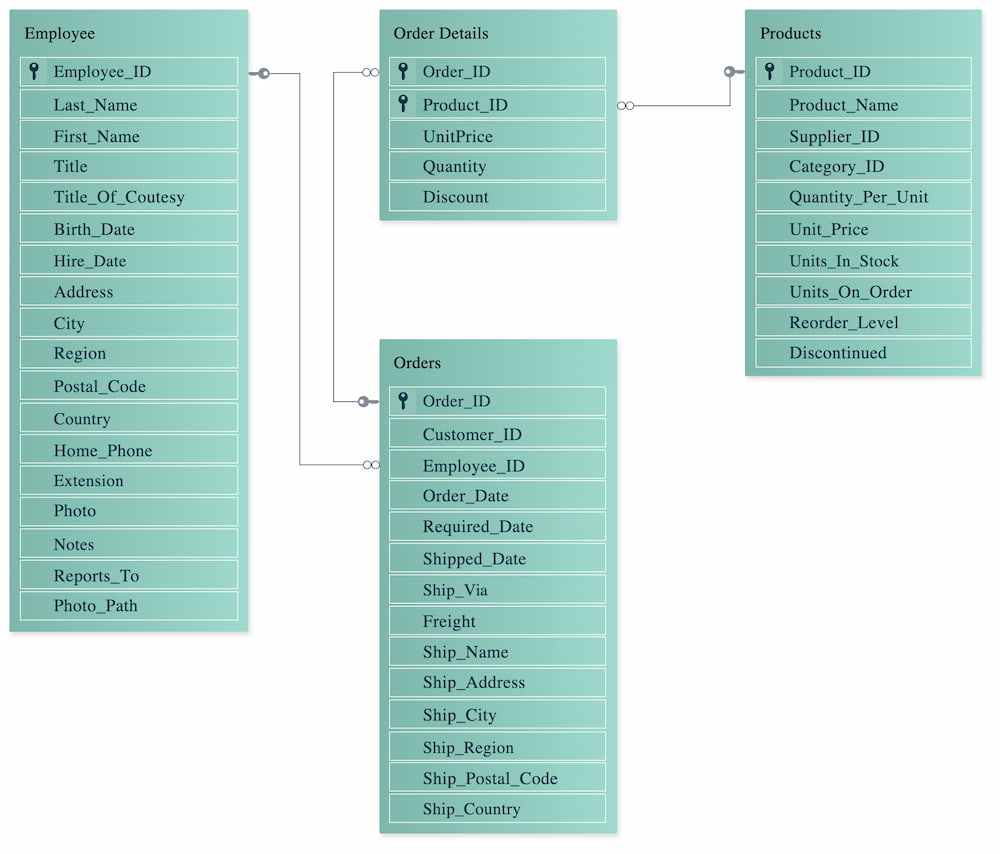 Despite the similarity and intentional compatibility, there are often differences in how data is modeled compared to traditional relational databases. The most obvious is that sequences are highly discouraged because generating a sequence across a distributed cluster creates a bottleneck that hampers scalability and performance. Instead, natural keys or randomly generated unique keys are preferred.

Distributed SQL databases are based on the same general architecture. Data is stored on multiple nodes. Writes are balanced between those nodes and assigned via a hashing algorithm, while reads are likewise balanced. Data is replicated to more than one node, so a distributed SQL database can survive the loss of one or more nodes. Writes and updates are handled via a distributed transaction that is coordinated among nodes. Some combination of client-side proxies or a load balancer directs traffic between database nodes.

Unlike other distributed database technologies (i.e., NoSQL), distributed SQL databases are designed for systems of record. They supply transactional integrity and strong consistency from the ground up with coordinated writes, locked records, and other methods such as multi-version concurrency control.

While the basic architectural approach of distributed SQL databases is easily recognized and distinct from both NoSQL and traditional relational databases, there are some key differences between them.

At this time, every distributed SQL database can be installed in the cloud; however, not all of them offer a fully managed database-as-a-service (DBaaS). Some distributed SQL databases are available in DBaaS formation, as a customer install, and even hybrid installations where the DBaaS can manage local instances and replicate between a private data center and a cloud installation, and vice versa.

MariaDB Xpand, for example, maintains compatibility with both MySQL and MariaDB databases. This compatibility includes both wire and SQL dialect, which means you can use most of your existing tools and frameworks that work with MySQL or MariaDB. CockroachDB attempts to be wire compatible with PostgreSQL but reimplements the query engine to distribute processing; this increases compatibility but reduces some opportunity for distributed query processing and tuning.

For complex applications migrating to distributed SQL, an existing traditional RDBMS front end in compatibility mode may make the most sense, particularly if you're using extended features of a traditional database. However, if you're running in production over the long term, migrating to a performance topology is likely a better option than using an existing front end.

In the early 2010s, NoSQL databases were widely popular for their scalability features. However, they relaxed transactional consistency and removed key database features, including joins. While adoption of NoSQL was swift for applications where scale and concurrency were the most important factors, most mission-critical applications that required transactional integrity remained in client-server databases like Oracle, MySQL, PostgreSQL, and SQL Server.

Ongoing research into consensus algorithms (e.g., Paxos Raft) enabled the creation of better horizontally scaling databases that maintain consistency. There are academic arguments over which is better, but from a user standpoint, they serve the same basic purpose. This research and other developments made some of NoSQL's compromises unnecessary: It's no longer necessary to rely on "eventual consistency" or BASE instead of strong or ACID-level transactions.

The distributed SQL architecture enables horizontal scalability; however, implementation details have a large impact on production reality. The key to scalability is how data is assigned to nodes and how data is rebalanced over time. Additionally, load balancing plays a central role in both scalability and performance. Some databases rely on the client to "know" which node to address. Others require traditional IP load balancers or use more sophisticated database proxies that understand more about the underlying database.

All distributed SQL databases are largely fault-tolerant. However, they differ in what happens during a fault. Does the client have to retry the failed transactions, or can they be recovered and replayed? How long does it take for the database to rebalance data between nodes in the event one is lost?

The major distributed SQL implementations support Kubernetes, but implementation and performance varies between them based on how IOPS are handled. While some allow bare-metal installations, self-healing and other functionality is limited or lost when running without Kubernetes.

Strictly speaking, multi-modal functionality is not a distributed SQL function but is based on whether ancillary processing or data storage types are provided with the database and how consistency guarantees apply to that functionality. Examples include column storage, analytics, and document storage. If a distributed SQL database provides these additional features, it's possible to combine real-time analytics along with operational capabilities.

Distributed SQL databases are operational or transactional databases by nature. However, by adding columnar indexes, distributed SQL databases can handle real-time analytical queries. Consider the case of e-commerce: The majority of queries will be light reads and writes, but eventually, someone will want to report on the sales or types of customer engagements — or even offload summaries into a data warehouse. These are long-running analytical queries that may benefit from a columnar index. Most distributed SQL databases do not yet have this capability, but it can be expected to become more commonplace as developers look to consolidate and simplify their data architecture.

The most important aspect of designing a proof of concept (PoC) is to focus on data and queries that closely match your actual application. There is a temptation to test the platform's limits with unrealistic queries (e.g., 15 joins with six tables that pulls back 1M rows or a single row point query) and measure the performance between different systems. Database technologies make trade-offs and optimize for particular usage patterns. In the case of distributed SQL, the database optimizes for throughput of transactional volume.

In designing a PoC, actual production data and application traffic is optimal. Second best is a simulation that closely matches the general pattern in terms of table structure, query complexity, and proportion of reads and writes. It's important to set goals beyond a single factor, such as pure database latency, and focus on overall app performance at nominal and peak usage. This means that if at nominal use, a traditional database offers 1ms latency but 1,000ms at peak usage, and the application performs at 4s but has a performance goal of 3s, it's not meeting the objective. If a distributed SQL database performs at 15ms under nominal usage but performs at 20ms at peak usage — and the application meets its 3s goal — it has met the requirement.

In generating load, it is essential to ensure that the infrastructure can generate sufficient load to test the database system capacity at the intended performance goal. For instance, if observed latency increases significantly at 1,000 transactions per second, but overall resource utilization of disk, CPU, and network do not appear to be bottlenecked, it may be that the load generation infrastructure is maxed rather than the system under test. It is equally essential to ensure the client network and other infrastructure between the load generator and system under test have sufficient capacity.

Evaluating cost is more complex than simply reviewing licensing, cost per hour, or any other vendor-advertised measure. It is important to consider the entire cost of the system, including factors such as:

Distributed SQL databases are one of the hottest new technologies in cloud computing. They offer transactional integrity without sacrificing scalability and are built for reliability in the cloud. This new technology makes it possible to bring applications that require a system of record to the cloud. The following resources provide additional information on distributed SQL databases: