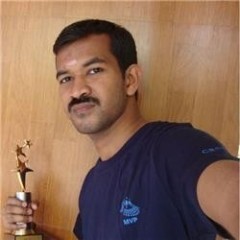 Hello Everyone, My name is Rajeesh.M.R commonly known as Rajeesh Menoth. I was born and brought up in Edappal (Thuyyam) a small village in Kerala, India and currently I am living in Bangalore with my family. Working in a Multi-National Company as a Senior Software Engineer. I have completed BTech-IT in 2012 from Anna University, Chennai & MBA-ISM in 2015 from Bharathiar University, Coimbatore. I started my IT career in 2013 as a Web Developer at “Sevika Janasevana Kendram” in Microsoft Technologies like C#, ASP.NET and SQL Server. During these 5 years I have worked and delivered multiple projects in different technologies. I started blogging in 2014 but I wasn’t good at all. In June 2014, I created an account in C# Corner. Before that, I was mostly answering forum questions. On the advice of my mentor, Tadit Dash (Microsoft MVP), I submitted my first article on C# Corner in June 2015. My work was recognized and I won an award for it. Then came the most happiest moment of my life, I received the MVP from C# Corner. I was overwhelmed because that was the first International award I have ever received. Experience in developing enterprise applications using Object Oriented Programming, .NET Framework, ASP.NET, ASP.NET Core, Azure and SQL Server programming,etc. I have been awarded as C# Corner MVP in 3 consecutive years ( 2015 , 2016 and 2017 ) & DZone MVB ( Most Valuable Blogger ) in 2017 and received many Top Contributors Awards & TechNet Wiki Guru Awards from Microsoft TechNet Wiki