Multithreading is the most complex part of Java. Happens-before is a relation that gives a guarantee of allowing the writing of predictable code in multithreading a reality. Such code is also known as thread-safe code. Unfortunately, Oracle Java documentation about this notion is hard to read. So in this article, I'll mainly explain what happens-before is in human language and provide detailed examples. 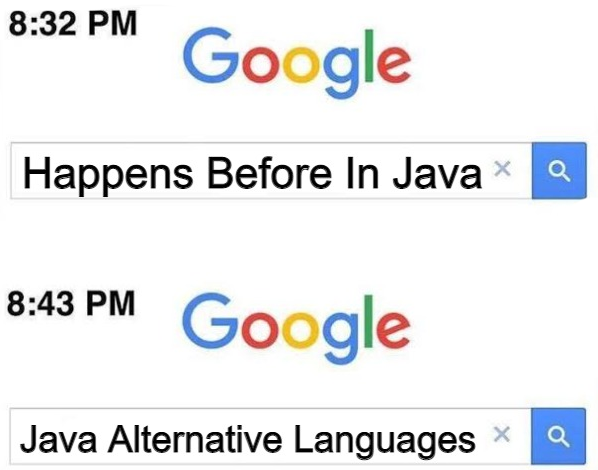 Before we start learning the happens-before notion, we have to understand the reason for creating it. Once multithreading comes to the scene, your code might become inconsistent because shared objects between threads might have different and unpredictable values. Let's review a simple example. In that example, we will update values in one thread and read and print them in another. 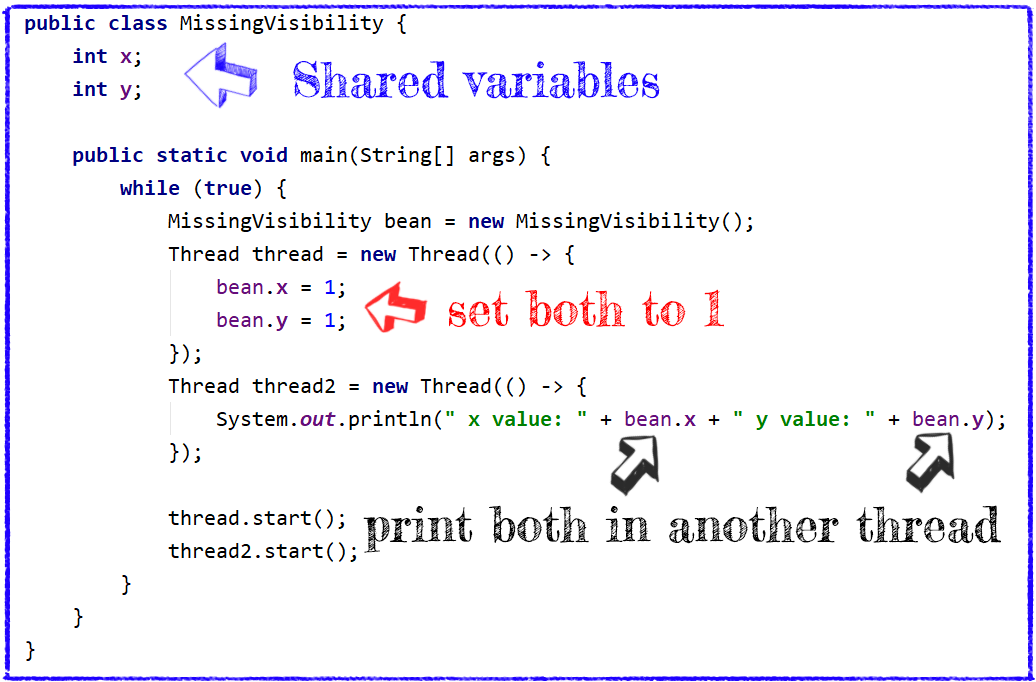 Now let's think about what values we might see in the second thread while printing.  Depending on progress in the first thread, we might expect 3 situations:

Now let's run the program a million times and see what values have been printed.

Among a million prints, there were only 3 different options printed (with my hardware, Windows OS, and my JDK). For some reason, the B case never appeared because it's not as confusing as an 0,1 pair, which looks impossible. The only thing we have to learn here is that results are unpredictable.

This is a pretty big topic and it's not the main subject of this article, so I will just briefly introduce the most known reasons.

Each thread can be executed in a separated CPU. CPU has its own cache with different variables copied. When one thread updates the value in the CPU, another thread will still have an outdated value. We can illustrate it like this:

What Is Actually Important: Thread-Safe Code

Everything explained earlier is only valuable for passing interviews; but in practice, all developers need is a way to predictably and consistently code in a multithreading reality, also known as thread-safe code. Fortunately, Java offers ways to write such code. 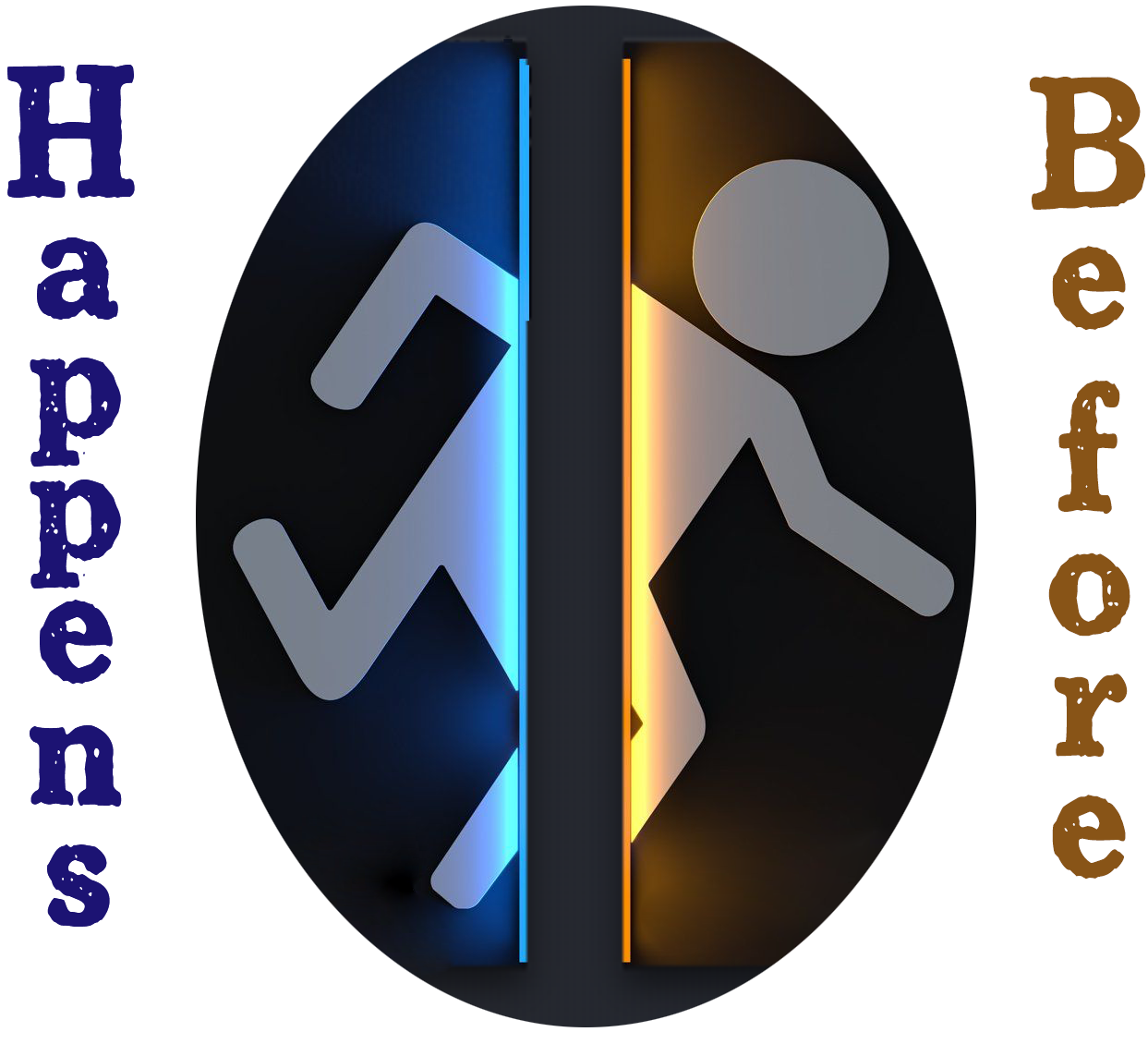 A write to a volatile field (§8.3.1.4) happens-before every subsequent read of that field.

Considering this, we have to make the next changes in order to have x and y consistent:

Considering all the changes, we rewrite our code in this way next: 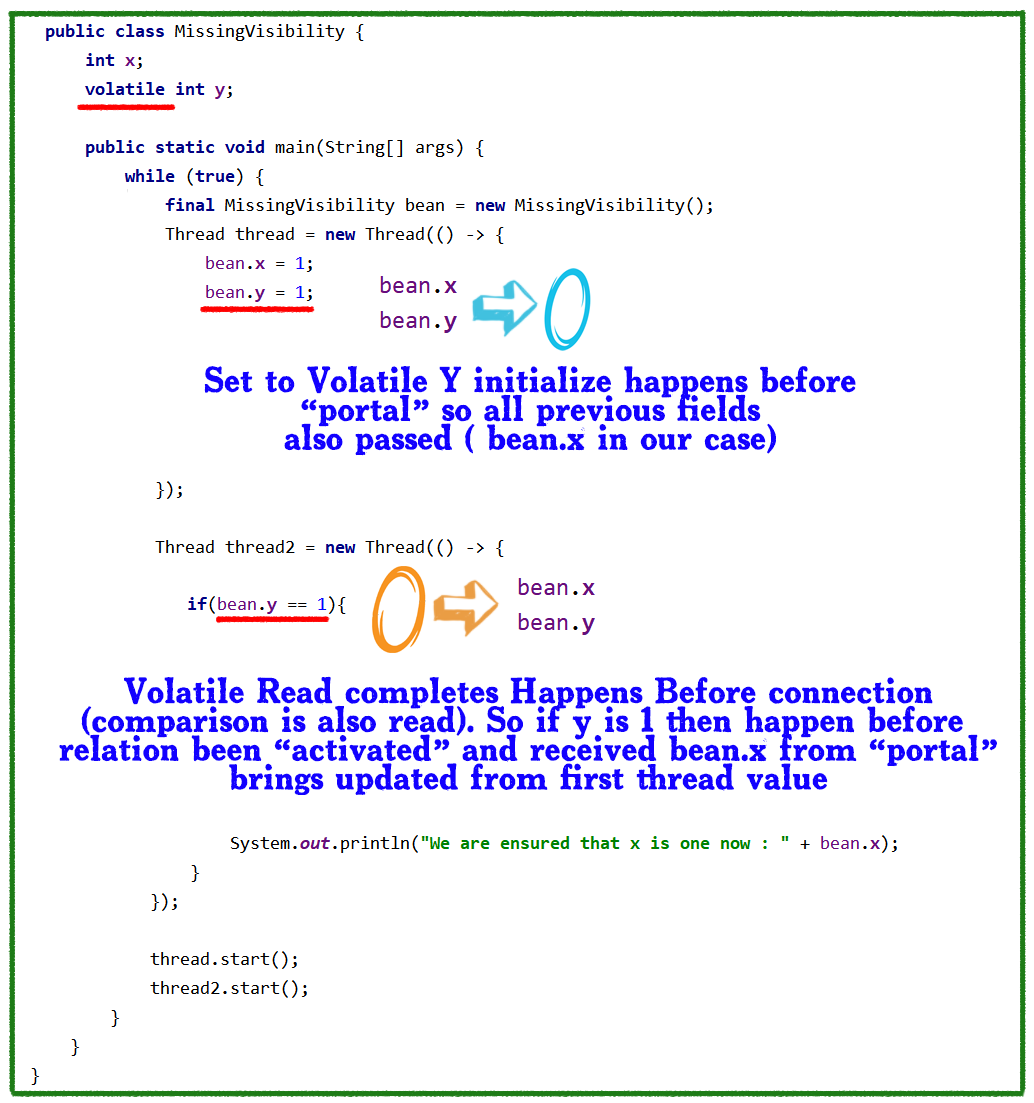 Java provides a way to organize ordered access to the instructions known as a Java monitor. I have described what it is and how it works in a set of three articles:

This subject is pretty complex. I also recommend reading these articles:

The happens-before relationship is installed between any lock acquire and lock release. So, if we rewrite our code using locks, we also have a happens-before guarantee: 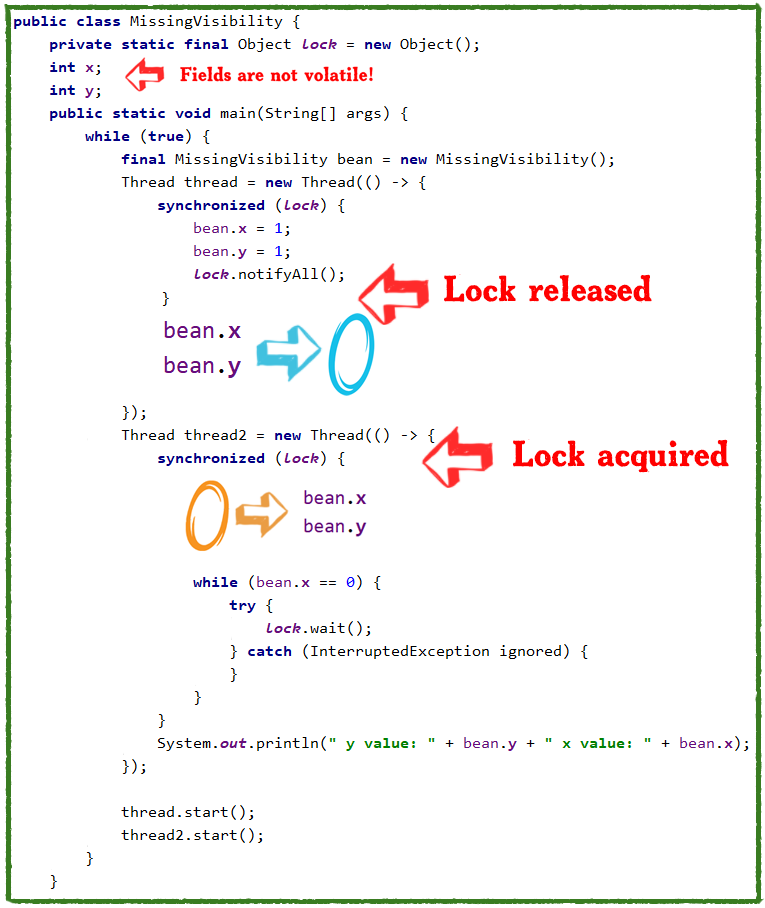 As you can see, both fields are not volatile; but when the first thread updates the value and releases the lock, then in the second thread when the lock is acquired, the value also gets updated due to the happened-before relation. This rule applied to all locks from java.util.concurrent that use a Java monitor under the hood.

This might be the easiest case compared to the previous two. Java specification says:

- A call to start() on a thread happens-before any actions in the started thread.

- All actions in a thread happen-before any other thread successfully returns from a join() on that thread.

Let's rewrite our example and illustrate how bean data is passed to the child thread when we call the start() method: 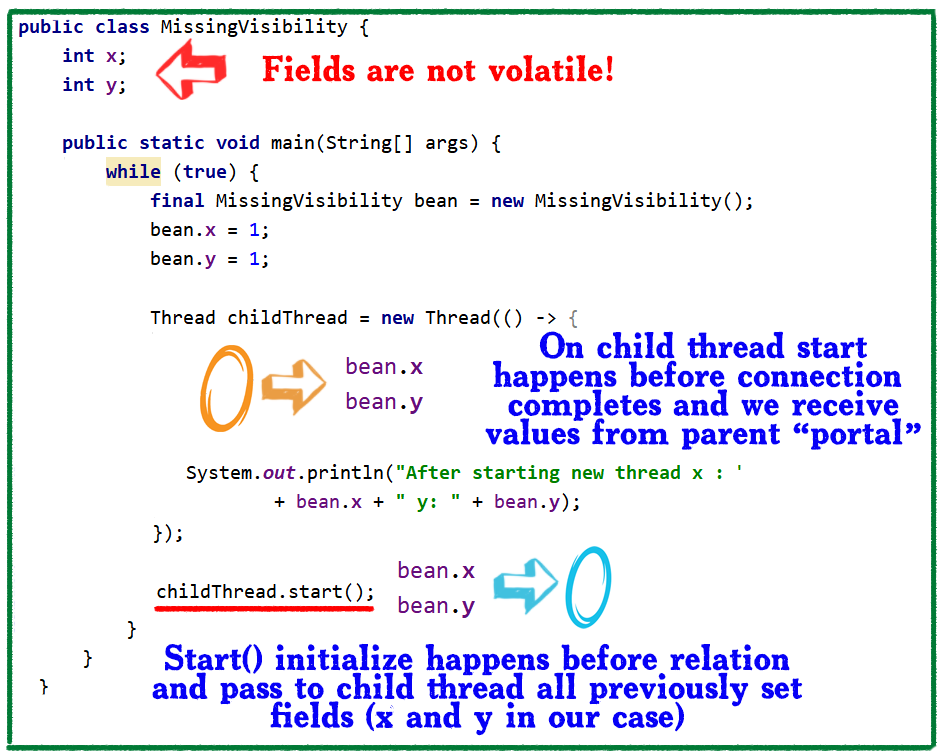 The example explains that values set in the main thread are successfully passed to the child thread due to the installation of the happens-before relation, and thanks to start() method.

Now let's illustrate the same logic, but when data is passed from the children to parent on join() method: 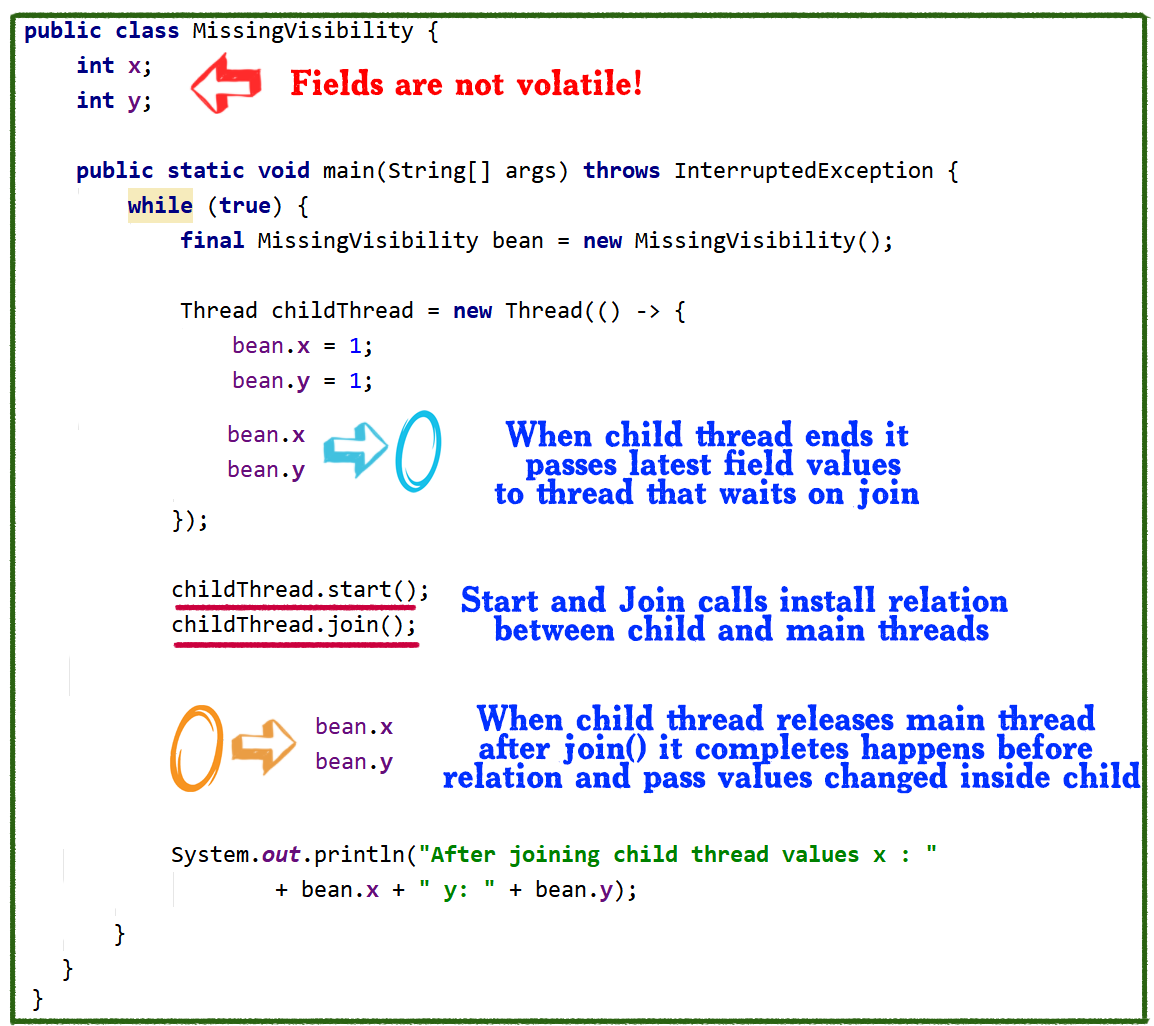 In this example, we pass data from the child thread to the main awaiting thread. Once a child thread ends its run and releases join, then values are passed correctly due to the existence of the happens-before relationship.

Are Examples Production-Ready and Recommended To Use? 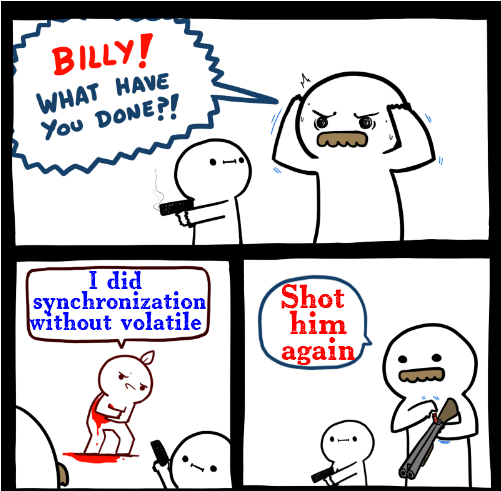 No, no, no! The examples that I provided served only one purpose: to explain what happens-before is, and how it works. In practice, you can't be too careful in a multithreading environment. To better avoid things I have shown:

Also, it is worth mentioning that in the first example (with volatile), I didn't mention when what happens-before relation is not enough when you take care of consistency. Volatile keywords give you safe reads, but not simultaneous writes (leads to race conditions). This subject is outside of this article.

The happens-before subject is one of the most complex subjects, and often are part of senior Java interviews. If you don't agree with something or you want to add something related, I'm glad to have a constructive discussion in the comments. Thanks for reading.