the eclipse helios release is now available for download .  each year i am amazed how the eclipse community is release on such a predictable schedule.  congratulations to all that help make it happen.

helios is the biggest eclipse release ever!  we have over 39 different project teams participating, more than 33 million lines of code, 490 committers, 108 of those committers were individuals and the rest of commiters work for 44 different organizations.  the amazing thing is that this is the 7th year in a row the eclipse platform has been release the last week of june, never missing a schedule release date.  what other software organization can make that claim!! 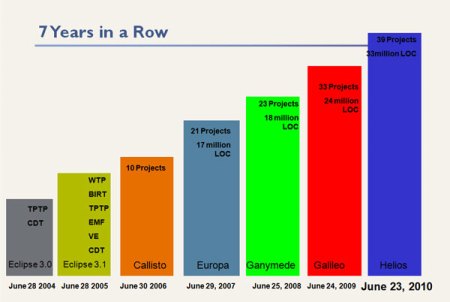 each year we highlight some of the new and interesting technology that is being released.  we also ask you to tell the community what you think is cool and interesting. for instance, ian bull has done the definitive top 10 list . here are some of the things i think are interesting in helios.

1. git support. egit and jgit 0.8 release are part of helios.  as many know git and github have a lot of interest in the developer community, especially at eclipse.  these two projects are well on the way to providing great eclipse tooling for git.

2. linux ide.  the linux tools project has done a great job improving eclipse for linux developers.   they have also created a new package for the download page, called the linux ide.   as we reported in the eclipse survey a lot more developers are using linux as their desktop operating system, so the linux ide is meeting a growing demand.

4. xtext 1.0. xtext has great momentum. if people are interested in domain specific languages, they are looking at xtext as a solution.  for instance, morgan stanley did a case study of using xtext at the recent code generation conference.

6. marketplace client.  ok, i am biased on this one since i was directly involved with this project but the marketplace clien t is looking great.   we will have over 100 eclipse products that can now be directly installable into your eclipse installation.  we are very close to having an eclipse appstore for the entire eclipse ecosystem.

new projects for the release train

this year we have a number of new projects on the release train.   people often lose sight of the fact that projects volunteer to participate in the release train, no one forces them, so it is great to see the continued interest.

there are a number of information resources setup to help you learn more about helios.  check out any of the following:

the release train is called indigo and i am confident it will be available the last week of june.