Along with the technical and business benefits, a microservices-based application architecture brings its own set of challenges. These challenges have been met with solutions ranging from new architectural patterns to the evolution of tech stacks themselves. Kubernetes has become one of the technologies in the tech stack evolution. Deploying microservices using Kubernetes enhances and enforces key principles and patterns while offering additional benefits.

It's an Evolution, Not a Revolution

As with any technical evolution, taking the next step improves upon what has already been shown to be successful while removing barriers to adoption or execution. Kubernetes is not going to address all microservices challenges, but it does address several pain points.

A Kubernetes Ingress is an example of a configurable service that auto-configures external access to microservices. When a microservice is deployed, it can define whether and how it is to be externally accessed. If a microservice specifies that it is to be externally accessible, the Ingress services within the Kubernetes cluster automatically configure external access, including details such as virtual host definitions and SSL certificates. 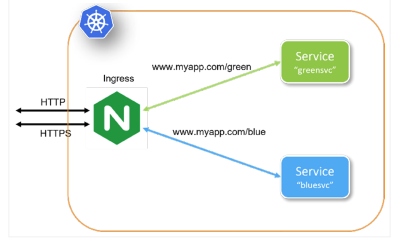 Here, a Kubernetes Ingress accepts HTTP(S) requests external to the Kubernetes cluster and, based on the request path, routes requests to specific services within the cluster. 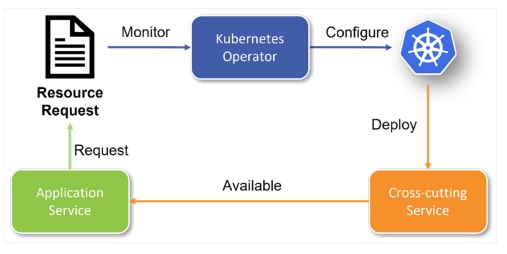 Kubernetes provides and supports abstractions over many systems required to satisfy non-functional components. Successful Kubernetes microservices architectures are comprehensive beyond application architecture, considering a strategy to not only address interoperability across microservices but coordination with common services.

Kubernetes deploys container-based applications; this implies that an artifact of a microservice build and packaging process is a Docker (or suitable alternative) image. In Kubernetes, the basic deployment unit for an image is a Pod. Often there is a one-to-one relationship between a deployed image and a Pod. However, Kubernetes Pods can support multiple deployed images within a single Pod. While the deployed containers do not share a file system, they can reference each other using localhost.

Within a Kubernetes cluster, deployed Pods can provide their services to other Pods. This is like a deployed microservice on bare metal or a virtual machine, although this deployment doesn't provide access to the Pod's service from an external resource, high availability, or scalability. As discussed, Kubernetes helps applications meet non-functional requirements. A general rule of thumb is when "-ility" is used to describe a function, it often means a non-functional requirement. Using high availability and scalability as examples, Kubernetes provides these with relative ease. There are a few Kubernetes constructs that support these functions. Two are presented here: Services and Deployments.

While Pod instances can be individually deployed, manually monitoring their status is impractical. A common pattern for adding automation to Pod "-ilities" is Kubernetes Deployments. Kubernetes Deployments specify details surrounding Pod definitions and provide several features that support the production deployment of microservices, including:

With Pod, Service, and Deployment definitions, a solid microservices architecture is in place. In this microcosm, one piece remains — that is, auto-scaling. With Deployments, scalability is available, but like direct Pod deployments, they are manually controlled. The final component to this architectural pattern is using a HorizontalPodAutoscaler to automatically scale the number of Pod instances based on certain criteria (e.g., CPU usage).

This example demonstrates how Kubernetes can take any containerized microservice and, using Kubernetes constructs, satisfy the critical non-functional requirements that most applications require. Assembling the patterns discussed here, the following diagram presents a high-level visual of a Kubernetes microservices deployment pattern: 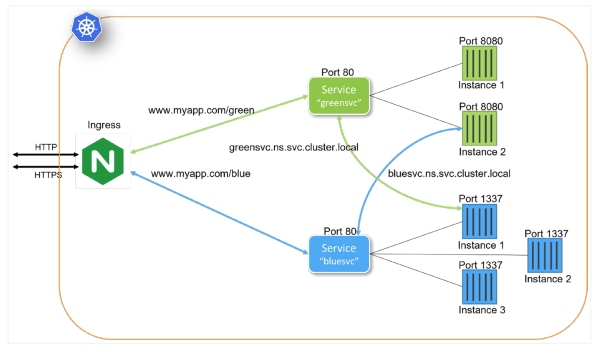 Figure 3: Putting it all together

Kubernetes provides many constructs and abstractions to support service and application Deployment. While applications differ, there are foundational concepts that help drive a well-defined microservices deployment strategy. Well-designed microservices deployment patterns play into an often-overlooked Kubernetes strength. Kubernetes is independent of runtime environments. Runtime environments include Kubernetes clusters running on cloud providers, in-house, bare metal, virtual machines, and developer workstations. When Kubernetes Deployments are designed properly, deploying to each of these and other environments is accomplished with the same exact configuration.

In grasping the platform independence offered by Kubernetes, developing and testing the deployment of microservices can begin with the development team and evolve through to production. Each iteration contributes to the overall deployment pattern. A production deployment definition is no different than a developer's workstation configuration. This pattern provides a level of validation that is difficult to reproduce in any previous pattern and can lead to rapid maturity of an application's delivery cycle.

To learn more about Helm charts, check out the article, "Advanced Guide to Helm Charts for Package Management in Kubernetes."

Whether it's Kubernetes or a different deployment platform, the same issues that need to be considered will need to be addressed upfront or later. In software engineering, it's almost always best to consider issues upfront. Kubernetes directly helps in addressing many microservices architectures and deployment challenges.