Provides a quick reference to the Ruby language, including language elements and many important API functions for quick look-up.

Ruby is already installed on Mac OS X and many Linux distributions. For Windows the easiest way to install everything necessary is the Ruby Installer (http://rubyinstaller.rubyforge.org).

This refcard provides a quick reference to language elements

and many important API functions for quick lookup.

Ruby is considered to be a "pure" object-oriented language because almost every concept within Ruby is object-oriented in some sense. Yukihiro "Matz" Matsumoto, Ruby's creator, wanted to develop a language that operated on the "principle of least surprise" meaning that code should behave in a nonconfusing manner and be reasonably self-explanatory (beyond the basic syntax). Matz also wanted Ruby to be a pleasurable language with which to program, and not make unnecessary demands upon the programmer.

Ruby is considered a "reflective" language because it's possible for a Ruby program to analyze itself (in terms of its make-up), make adjustments to the way it works, and even overwrite its own code with other code. It's also considered to be "dynamically typed" because you don't need to specify what type of objects can be associated with certain variables. Objects are considered prime in Ruby and whether you're passing around a string, a number, a regular expression, or even a class, you're just dealing with an object from Ruby's point of view.

Ruby will seem reasonably familiar to Python and Perl programmers (and to a lesser extent C# and JavaScript developers) as Ruby was heavily inspired by Perl in certain areas (as was Python). Ruby is less similar to languages like C, C++ or Java because these languages are compiled (not interpreted), statically typed, and focused on performance rather than flexibility and conciseness.

Despite being an object-oriented language, it is not necessary to use explicitly object-oriented syntax within a basic Ruby program. While everything works on objects (and methods called upon those objects) behind the scenes, you can write a program as simply as this:

This script prints to screen the 10th number in the Fibonacci sequence. It defines a method called fib that returns the relevant result from a simple if/elsif/else expression. Note the use of standard equality syntax (==), addition (+), subtraction (-), and method calling (fib(10)), but also note the possibility of using methods in somewhat idiomatic ways (i.zero? rather than i == 0—though the latter would also work). The use of i.zero? demonstrates calling a method upon an object (where i is the object, and zero? is the method).

The main Ruby interpreter is usually invoked by running "ruby" from the command line. If it is given a filename as an argument that file will be run (e.g. ruby myscript.rb). The interpreter has several other options that are listed in the "Ruby Interpreter Arguments" table in this card's reference section.

Developing a program with "true" object-oriented syntax is not significantly different. For example:

In this example, a class (Person) is defined, and attributes (name and age) and a method (full_info) are defined upon that class. Below the class definition, we then create an instance of the Person class and assign it to a variable, fred, before assigning values to its attributes, and then calling that instance's full_info method (which, in turn, uses instance variables—prefixed with @-to create its output).

"This is a test" is a string with no special qualities (and, remember, it's also an object in Ruby) but it's possible to interpolate data into it (from variables, etc.) with a special syntax:

Earlier we called Ruby a "reflective" language because it offers functionality to programs to change, extend, and otherwise inspect themselves. We can look at a key Ruby idiom and reflective feature—class reopening—by changing the Fibonacci example from earlier to the following:

Note this time that in order to get the Fibonacci number, we're no longer calling a global fib method, but a method that works directly upon the number 10 itself (remember, everything is an object—even the number 10!). The way this is achieved is by "reopening" a standard Ruby class—Integer—and defining a new method called fib within it. This then makes the fib method available to all objects of class Integer in Ruby! Note that the content of the integer object itself (the number we need to use) is obtained with the self keyword. self, in this case, returns a representation of the current object in its native form. In this sense, Ruby is very similar to Python.

IRB (short for "Interactive Ruby") is an interactive prompt or "Read-Eval-Print-Loop" (REPL) that uses the Ruby interpreter. Anything you type is evaluated by Ruby and the response printed to screen. IRB can be invoked by running "irb" from the command. A demonstrative session shows the usage:

IRB is most commonly used when learning the Ruby programming language, and also as a handy "sand box" to try out new programming tricks and techniques quickly. IRB can be used to interactively explore classes, test pieces of code and is also used as a console to inspect and manipulate running programs, for example, in Web applications.

Want to try Ruby without installing anything?
Or want to get a walkthrough tutorial? Go to http://tryruby.hobix.com. It's a Web-based version of IRB and Ruby, and features a tutorial to bring you up to speed.
Section 5

RubyGems is the official Ruby package manager (though, notably, it is not included with default Ruby 1.8 releases by default— although it is present within Ruby 1.9 and on the OS X version of Ruby 1.8). It allows developers and users to easily search, install and update Ruby libraries and their dependencies and works in a similar fashion to other package management tools (such as yum and apt-get).

Gems are installed by running "gem install" and the name of the gem (e.g. gem install rails). Running "gem update" updates all installed gems to their latest official versions.

A selection of popular Ruby gems/libraries:

Information about RubyGems can be found at: http://www.rubygems.org

The following reference tables provide a quick look at many elements of Ruby's syntax. These can be used as a comparison to other languages in order to see how the syntax differs. Ruby's syntax is often rather different to that of, say, Java or C#. 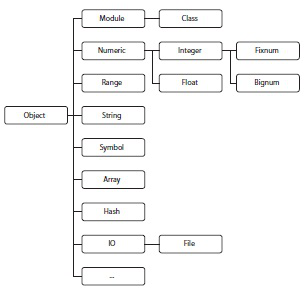 Ruby 1.9 is the new version of Ruby considered transitional to Ruby 2.0 containing many changes to the language and libraries. It has an entirely new virtual machine and bytecode compiler, formerly known as YARV.

The new version includes support for unicode in strings, the famous Oniguruma regular expression engine as well as Operating System Threads and Fibers for lightweight concurrency.