In recent years, the testing community has witnessed a steady rise in automation testing. Although it has proved significant advantages compared to manual testing, flakiness in locating objects for WebUI testing is still a constant problem that restrains the transition to automated testing for teams. Testers have to spend unnecessary time and effort to manually update the object locators whenever they make new changes to the application.

The Self-healing mechanism is one of the most promising factors to completely change the automation Web testing. By eliminating unnecessary repetitive tasks in execution, this mechanism creates the foundation for test automation to perform at its full potential.

Object locator flakiness comes from the root of automation itself: fragile test scripts. Object locators, most often, can no longer identify the target element after the application under test (AUT) changes. Pre-written scripts then will fail to run the test correctly, which results in a false failed result. The QA team has to detect whether their tests fail because they actually have a problem, or the scripts cannot adapt to new element changes. Web testing, in which UI changes happen over and over, appears to suffer the most from this flakiness.

To maximize the speed advantage of automation testing, automation testers demand a mechanism that can recognize and skip these UI changes to keep the scripts running seamlessly. For automation testers, Self-healing function has turned out to be the optimal solution for this pain point.

What Is Self-Healing Automation? Why Is it Important?

The human body is a perfect example to explain the self-healing mechanism. Whenever a human gets injured, the human self-healing function is triggered to find the wound and heal it without any action needed. For any minor injuries, this mechanism can quickly heal wounds without human intervention.

Back to self-healing automation in software testing, it functions exactly like the way the human body works. Based on the object changes in properties, the self-healing mechanism actively studies the characteristics and properties of all available objects, removing similar objects on the page and comparing their historical data. Then, the test engine will automatically pick up an alternative that best assembles the changed locator to keep the test running.

Self-healing has been a desirable solution to solve one major challenge of automation testing: Quality at speed.

By identifying new changes and replacing them with similar objects, the self-healing mechanism reduces downtime and significantly speeds up the deployment process. With this capability, QA teams can release the burden of intense script maintenance, and save time and resources.

Additionally, a well-built self-healing mechanism gives QA teams the ability to create generic test frameworks that can apply to a broad range of software, improving the benefits of automation.

In their latest update — version 7.6 — Katalon Studio company has introduced the new self-healing mechanism to its users. This function allows users to speed up processes and maximize automation efforts for the whole team.

Before the updated version was released, Katalon Studio users were familiar with its Auto-healing Smart XPath. This plugin assists in recovering broken default locators by trying other available XPath alternatives. However, in case there are no suitable alternatives available, the execution will stop running.

To advance its process and provide users with more efficient test maintenance, Katalon Studio developed the Self-healing mechanism that has been released lately. Following the positive impacts of Smart XPath, the self-healing mechanism is made to be more robust and comprehensive to tackle broken locators during each execution.

Get to Know the Self-Healing Mechanism in Katalon Studio

During the execution, if Katalon Studio fails to identify an object with its default locator, the tool tries other pre-configured locators associated with that object. With 4 selection methods, including XPath, Attributes CSS, and image, users can opt to set the object locating priority to ensure accuracy and continuity of the execution.

If Katalon finds a suitable object within the selectors, the test keeps running to completion. With approval from the tester, the locator that is selected to replace the broken object will then be saved for that particular Test Object in future executions. By doing so, Katalon Studio creates a database to make the self-healing mechanism even more efficient by avoiding analyzing one same broken object repeatedly.

Once the execution is over, Katalon Studio will suggest replacing all broken locators with the locators having found the objects. If Katalon Studio cannot find the target objects, the test will either continue or stop running, depending on how users designed the failure handling option.

How to Execute Tests Using Self-Healing Mechanism in Katalon Studio

In a Katalon Studio project, you can find a screen in project settings dedicated to Self-healing. You can change the default settings to make the utility better suit your needs.

The self-healing mode is activated by default whenever users run the application. To open the Self-healing window, go to Project/Settings/Self-Healing/Web UI.

To start with Katalon Studio’s self-healing, users need to set initial settings to decide the default selection method used during spying and recording. Please note that for Image selection, screenshots for the objects are mandatory. 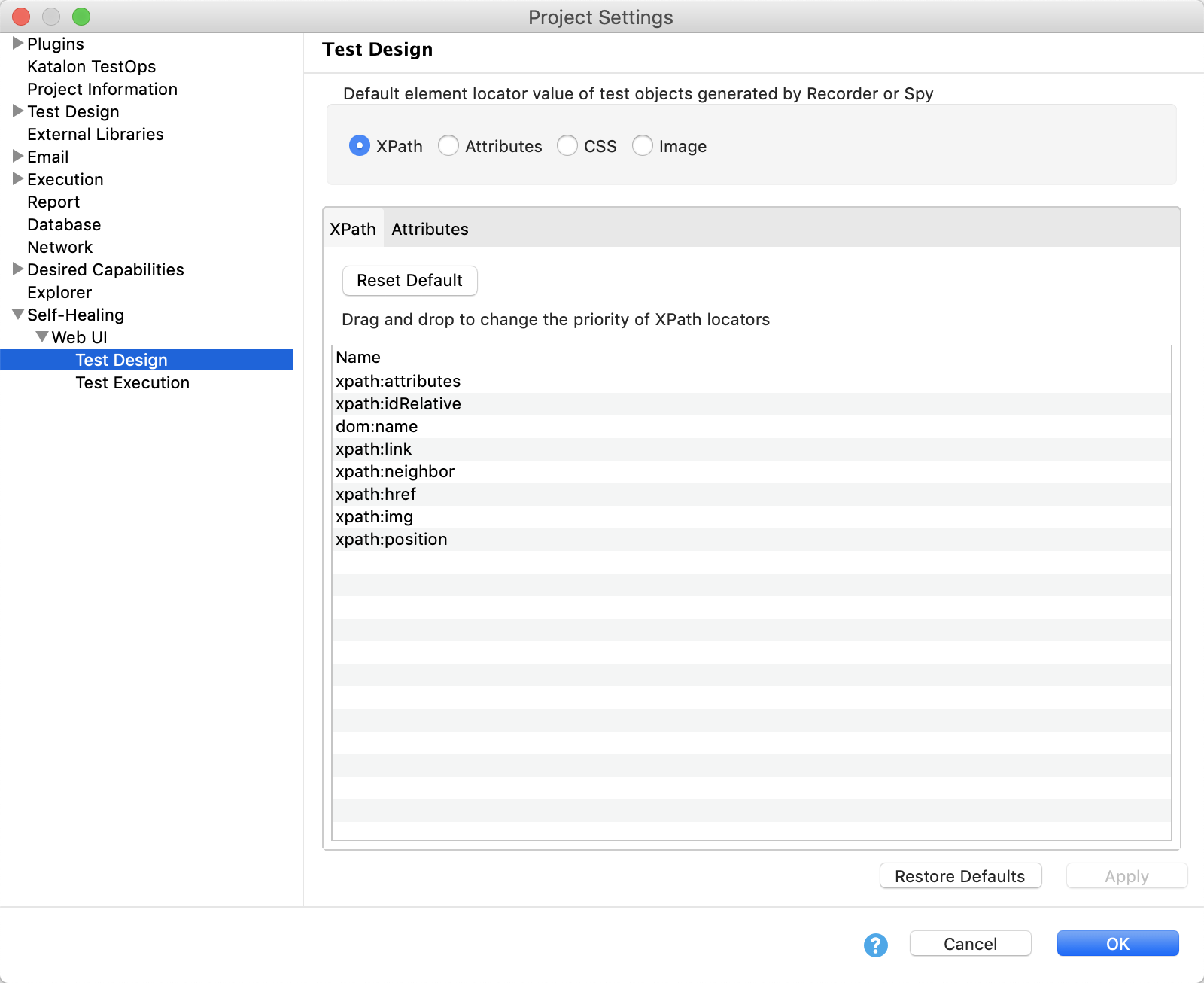 Users can decide which alternative locators to be used in terms of selection methods and their priorities in Project/Settings/Self-Healing/Web UI/ Test Execution. 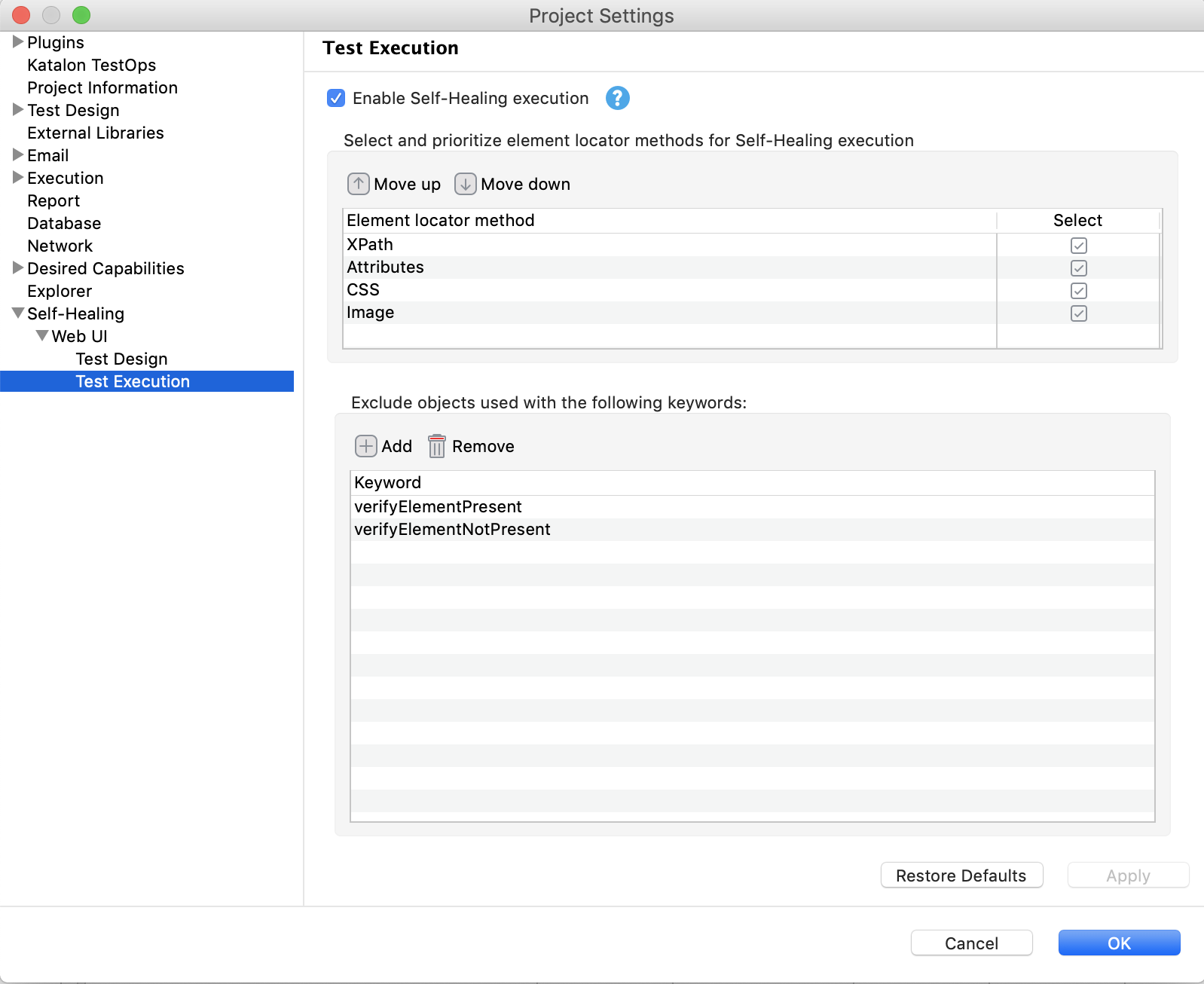 This predefined order will be applied when Katalon fails to locate the target objects.

All the replacements are recorded in Self-healing Insights when the execution is over. Katalon Studio allows users to decide which alternative locators to be used in terms of selection methods and their priorities.

To read the full tutorial and sample project using the self-healing mechanism, you can visit Katalon’s Document hub here.

With this upgraded Self-healing mechanism, Web testing is made faster and easier as it reduces human efforts on script maintenance with less interruption. This is a valuable addition for Katalon users to have a more powerful automation experience with consistent results.

To try out this new functionality, sign up on the Katalon website with your business email and get a 30-day free trial with full functions in the latest Katalon Studio!