Technical debt is a fact of life for anyone working in software development: work that needs to be done to make the system cleaner and simpler and cheaper to run over the long term, but that the business doesn't know about or doesn't see as a priority. This is because technical debt is mostly hidden from the people that use the system: the system works ok, even if there are shortcuts in design that make the system harder for developers to understand and change than it should be; or code that’s hard to read or that has been copied too many times; maybe some bugs that the customers don’t know about and that the development team is betting they won’t have to fix; and the platform has fallen behind on patches.

It’s the same for most application security vulnerabilities. The system runs fine, customers can’t see anything wrong, but there’s something missing or not-quite-right under the hood, and bad things might happen if these problems aren't taken care of in time.

Where does Technical Debt come from?

Technical debt is the accumulation of many decisions made over the life of a system. Martin Fowler has a nice 2x2 matrix that explains how these decisions add to a system’s debt load: 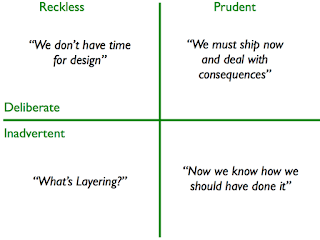 I think that this same matrix can be used to understand more about where application security problems come from, and how to deal with them.

Many appsec problems come from the top half of the quadrant, where people make deliberate, conscious decisions to short cut security work when they are designing and developing software. This is where the “debt” metaphor properly applies, because someone is taking out a loan against the future, trading off time against cost – making a strategic decision to save time now, get the software out the door knowing that they have taken on risks and costs that will have to be repaid later.

This is the kind of decision that technology startups make all the time. Thinking Lean, it really doesn't matter if a system is secure if nobody ever uses it. So build out important features first and get customers using them, then take care of making sure everything’s secure later if the company lasts that long. Companies that do make it this far often end up in a vicious cycle of getting hacked, fixing vulnerabilities and getting hacked again until they rewrite a lot of the code and eventually change how they think about security and secure development.

Whether you are acting recklessly (top left) or prudently (top right) depends on whether you understand what your security and privacy obligations are, and understand what risks you are taking on by not meeting them. Are you considering security in requirements and in the design of the system and in how it’s built? Are you keeping track of the trade-offs that you are making? Do you know what it takes to build a secure system, and are you prepared to build more security in later, knowing how much this is going to cost?

Unfortunately, when it comes to application security, many of these decisions are made irresponsibly. But there also situations when people don’t know enough about application security to make conscious trade-off decisions, even reckless decisions. They are in the bottom half of the quadrant, making mistakes and taking on significant risks without knowing it.

Many technical debt problems (and a lot of application security vulnerabilities) are the result of ignorance: from developers not understanding enough about the kind of system they are building or the language or platform that they are using or even the basics of making software to know if they are doing something wrong or if they aren't doing something that they should be doing. This is technical debt that is hidden even from people inside the team.

When it comes to appsec, there are too many simple things that too many developers still don’t know about, like how to write embedded SQL properly to protect an app from SQL Injection, or how important data input validation is and how to do it right, or even how to do something as simple as aForgot Password function without messing it up and creating security holes. When they’re writing code badly without knowing it, they’re in the bottom left corner of the technical debt quadrant – reckless and ignorant.

But it’s also too easy for teams who are trying to be responsible (bottom right) to miss things or make bad mistakes, because they don’t understand the black magic of how to store passwords securely or because they don’t know about Content Security Policy protection against XSS in web apps, or how to use tokens to protect sessions against CSRF, or any of the many platform-specific and situation-specific security holes that they have to plug. Most developers won’t know about these problems unless they get training, or until they fail an audit or a pen test, or until the system gets hacked, or maybe they will never know about them, whether the system has been hacked or not.

Financial debt models like this are intended to help people (especially managers) understand the potential cost of technical debt or application security debt, and make them act more responsibly towards managing their debt. But unfortunately tracking debt costs hasn't helped the world’s major governments face up to their debt obligations and it doesn't seem to affect how most individuals manage their personal debt. And I don't think that this approach will create real change in how businesses think of application security debt or technical debt, or how much effort they will put in to addressing it.

Too many people in too many organizations have become too accustomed to living with debt, and they have learned to accept it as part of how they work. Paying off debt can always be put off until later, even if later never comes. Adding appsec vulnerabilities to the existing debt that most managers and developers are already dealing with isn't going to get vulnerabilities taken care of faster, even vulnerabilities that have a high “interest cost”. We need a different way to convince managers and developers that application security needs to be taken seriously.