The number of people on your team can significantly impact your business. When you’re starting your business initially, it’s easy to keep track of everything that needs to be done. But as the team grows, things can get out of hand.

At the same time, if multiple teams work parallel on one product, they need to communicate regularly and effectively. In most cases, people across many teams will not collaborate closely or even see each other regularly, so how can they communicate efficiently? How can they divide work between them if they don’t meet each other face-to-face?

For decades, the Scrum Guide has proven to be a helpful resource in supporting teams and companies that need to address these issues. Scrum is a framework for developing products that embraces empiricism and is optimized for complex projects.

Here’s when the Scrum of Scrums technique comes to play. Scrum of Scrums is the process of managing multiple Scrum-based projects of any size as an integrated and unified business process. As Scrum is one of the most popular agile frameworks, it requires a unique set of capabilities and a shift in thinking for everyone involved.

Scrum of Scrums refers to a customer and project management technique that utilizes concurrent development rather than serial. It provides a lightweight way to manage the interactions between several scrum teams.

This guide will study the working, structure, and benefits of a scrum of scrum practices in detail to help you scale and integrate your work with multiple Scrum teams working on the same project.

History of Scrum of Scrums (SoS)

The Scrum of Scrums framework was first introduced by Jeff Sutherland and Ken Schwaber in 1996 while operating at the Lawrence Livermore National Laboratory. The original purpose of this framework was to coordinate the activities of eight business units with multiple product lines per business unit in a single development cycle.

Sutherland and Schwaber found that having separate scrum teams for each business unit impeded workflow within and across business units, so they experimented. They gathered all eight product teams into a single room. They had their work together by forming a meta-team or “Scrum of Scrums” to create an environment where independent teams could synchronize their efforts more efficiently.

Later, in 2001, Sutherland published this experience under the title “Agile Can Scale: Inventing and Reinventing SCRUM in Five Companies,” which mentioned Scrum of Scrum for the first time.

What is Scrum of Scrums?

Scrum of Scrums is designed to be a lightweight solution for scaling agile methods. The main benefit of the Scrum of Scrums' approach is to provide a way to enhance communication by connecting people from different Scrum teams who need to collaborate and coordinate with each other.

The essential Scrum of Scrums’ purpose is that multiple teams are working on a single product, and there needs to be a way for all of these teams to communicate with each other.

It’s particularly relevant for organizations with teams across geographies and time zones because it allows teams to synchronize their work, communicate any issues or delays, and coordinate planning activities.

According to the definition of Jeff Sutherland, “Scrum of scrums as I have used it is responsible for delivering the working software of all teams to the Definition of Done at the end of the Sprint, or for releases during the sprint.”

Scrum of Scrums helps deploy and deliver complex products by adapting transparency and inspection at a large scale. It enables scrum teams to work towards common goals and complete the project by aligning.

Participants present at the Scrum of Scrums answer similar questions like daily Scrum. For instance:

There are various techniques by which you can implement the Scrum of Scrums. It could be a meeting within the team or with all teams. Therefore, the scrum of scrum definition aims to get all teams in sync with each other so that any dependencies between teams have been identified and resolved.

How Does SOS Work?

Scrum of Scrums divides a large team into smaller scrum teams or subteams. Each subteam will have its daily standups, sprint planning sessions, and other events as part of a Scrum of Scrums meetings.

The basic idea is to give each subteam the autonomy to plan their work independently while still coordinating with the rest of the team—just as independent teams do in a traditional scrum. Here, the large number of people divided into smaller scrum teams can include up to 10 members in each team.

Each team chooses one developer to act as a spokesperson, often known as an “ambassador,” for daily standups during their scaled Scrum. Another role is the Scrum of Scrums master, similar to the Scrum Master for Scrum methodology but at a higher level.

Purpose of Scrum of Scrums

A Scrum of Scrums meeting can be a valuable way to communicate with organizations with different goals. Here’s how:

Structure of Scrums of Scrums 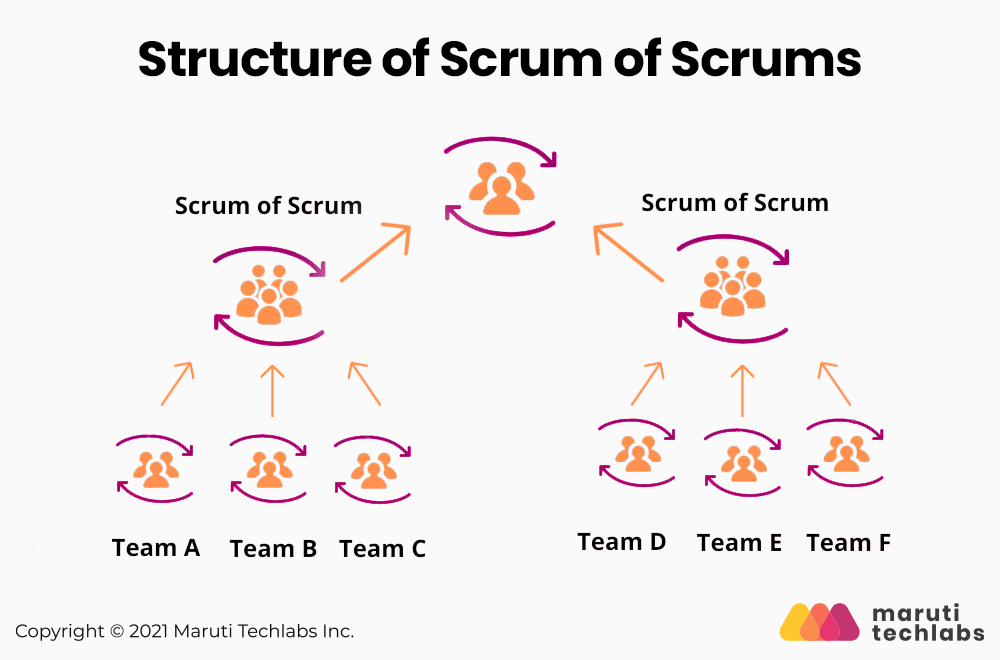 Figure 1 Structure of Scrums of Scrums

A Scrum of Scrums team is a cross-functional team that includes representatives from multiple Scrum teams. It follows the same practices and events as an individual Scrum team, and each member of the Scrum of Scrums team has the same role as a member of the corresponding Scrum team. However, to deploy the potentially integrated product at the end of every sprint, new additional parts are included here, not found in Scrum teams.

Another such role is Scrum of Scrums Master, who is responsible for focusing on the progress and product backlogs, facilitating prioritization, and continuously improving the effectiveness of Scrum of Scrums.

These roles take up the 15 minutes of scaled daily Scrum meet-ups to align and improve the impediments of the project. Here, each team’s product owner or ambassador discusses each team’s requirements, risks, and sprint goals with the other team. It also identifies the improvements of their team that other groups can leverage to achieve the final product.

Benefits of a Scrum of Scrums 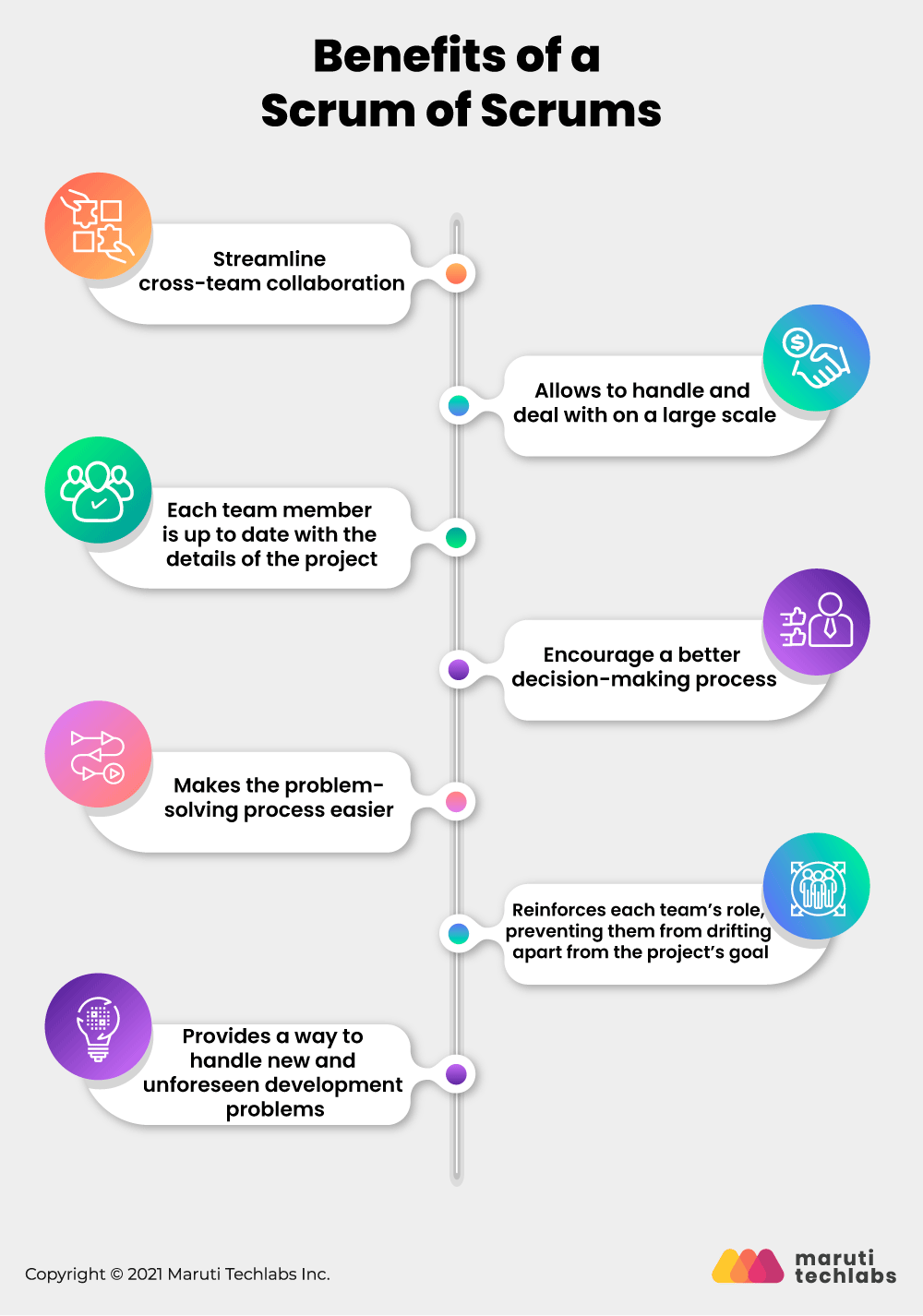 Figure 2 Benefits of a Scrum of Scrums

Scrum of Scrums is the best way to scale agile to organizations with multiple teams. As for the Scrum of Scrums (SoS) meeting agenda, below are some of the SoS best practices to consider for getting the team composition right and conducting an effective meeting:

Who Attends Scrum of Scrums? 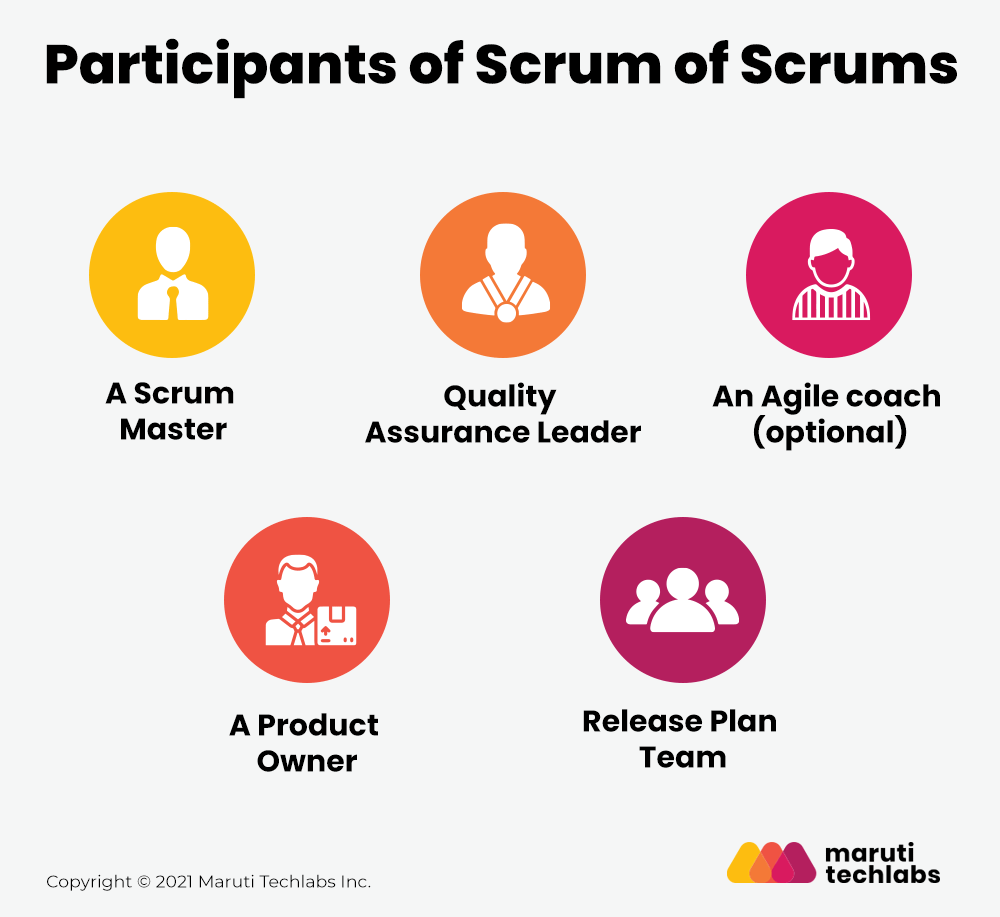 The Scrum of Scrums Meeting is not prescribed by an official description, as it depends on the theme of the sprint. For example, if the theme is user experience, one team can send an expert in this area. The teams can send different experts depending on the Sprint theme; however, one rule applies: nine people can be there in the end.

Although sending a Scrum master to a Scrum of Scrum meeting makes sense, shipping a product owner or development team member with more excellent technical knowledge might be better. The Scrum of Scrum representative may change over time as issues arise.

The Scrum of Scrums can continue at higher levels as well. Meetings can occur not only among teams but also between experts, for instance, between two product owners, to discuss the feasibility of their product towards the market condition. It is not uncommon for this meeting to be called a “Scrum of Scrum of Scrums,” but this designation is not always used.

The team itself should decide the frequency of this meeting. According to Ken Schwaber, the sessions should happen daily and last no longer than 15 minutes. However, a Scrum team may discover that it does not need to meet as often as initially planned.

It is more effective to schedule meetings less frequently yet for more extended periods. You can do it by holding two or three sessions a week instead of daily encounters. It allows team members to focus on any issues that may arise, rather than addressing them in the daily meeting, often revisiting prior problems and concerns.

When an issue is identified that requires attention and discussion, you must discuss it as soon as possible. When many people are involved in determining the case, it is often a problem affecting the work of large groups of people. It deserves to be resolved as soon as possible. Therefore, while a scrum of scrums meeting may last only fifteen minutes, everyone should budget more time to discuss potential problems.

Agenda of Scrum of Scrums 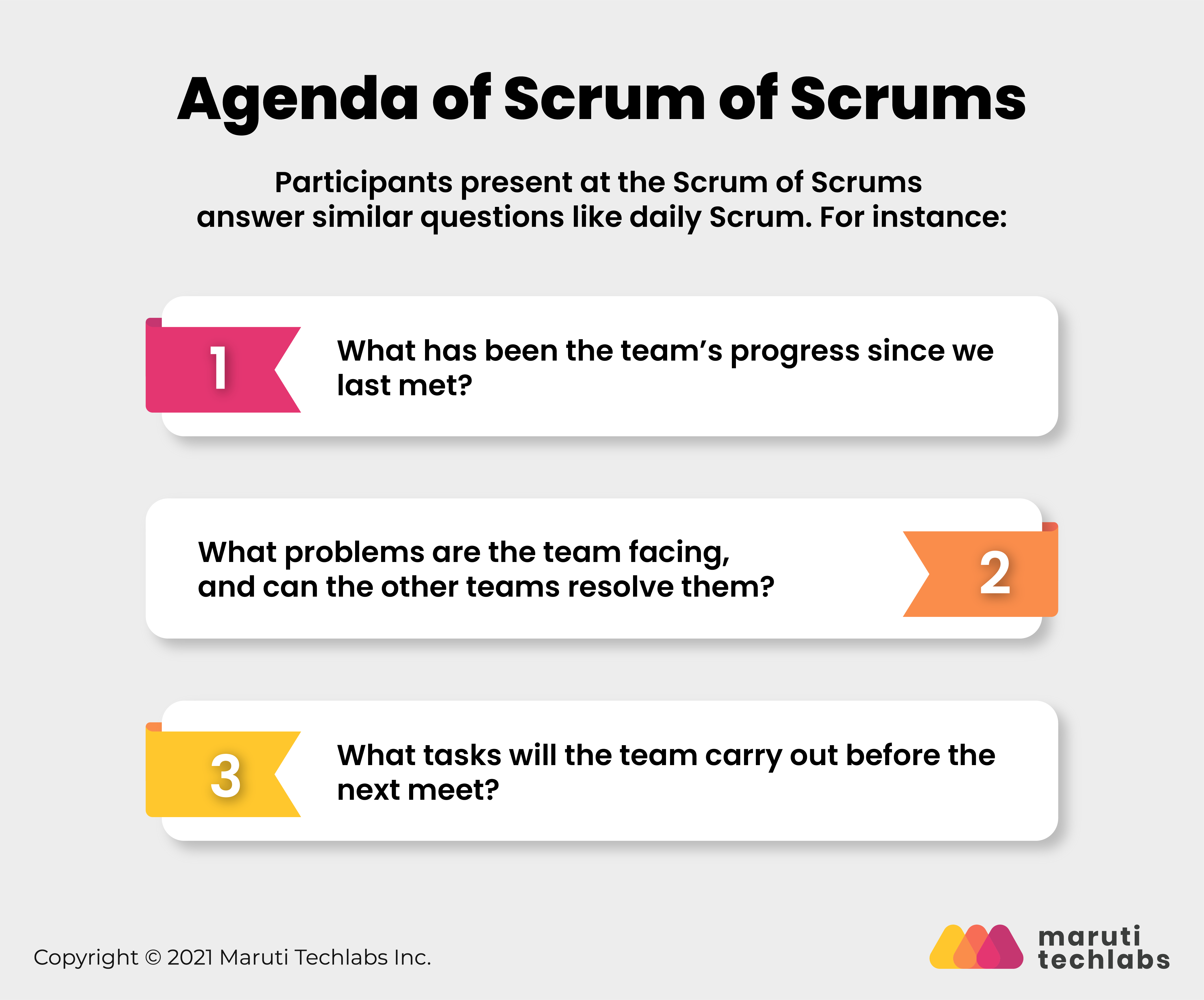 Figure 4 Agenda of Scrums of Scrums

An excellent scrum of scrums plan should reflect the format of the daily Scrum, which has the following questions to answer:

The Scrum of Scrums meeting begins by answering these four questions by each participant present in a relatively short and fast-paced manner. This helps the scrum ambassador ensure the operational effectiveness of each team and that they are working towards the common goal of the project.

During this part of the meeting, the facilitator should encourage participants to raise questions and issues but not discuss possible solutions until everyone has had a chance to answer the above questions.

One of the best techniques to achieve this is to leave the names out of the conversions, which can ultimately help you keep the discussion at the appropriate level of detail. This process aims to create a sense of coordination and cooperation between all the teams by involving cross-team synchronization.

Once the process is complete, the focus of the meeting shifts to addressing the issues and challenges discussed in the initial phase or maintained on the Scrum of Scrums backlog.

A Scrum of Scrums framework can be very effective in large organizations with multiple teams, provided the Scrum of Scrum meetings are well-run and focus on solving issues that affect teams.

The purpose of a Scrum of Scrums meeting is not to report the progress of development teams to manage but rather to make sure that the individual teams are fulfilling their sprint goals and that the overall project goal is accomplished.

Scrum of Scrums is a unique approach to leading your organization towards agility. It’s a method of holding meetings and tracking progress while maintaining productivity. SoS ensures that meetings are more efficient, streamlined, and effective. It can help your organization become more agile—as it allows for faster development cycles and improved communication amongst the various teams involved in any given project.

Podcast of the importance of scrum masters

Published at DZone with permission of Mitul Makadia. See the original article here.