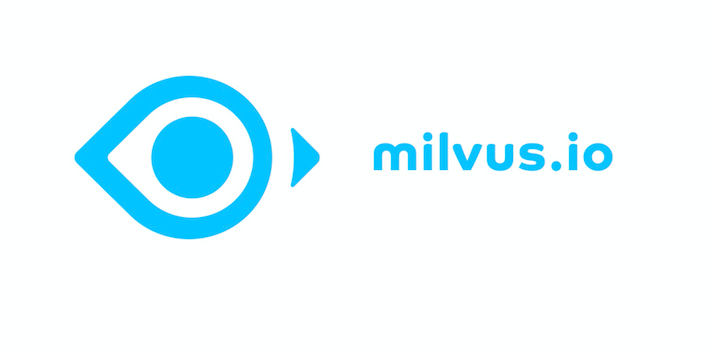 When you heard “Search by Image,”did you first think of the reverse image search function by search engines such as Google and Baidu? In fact, you can build your own image search system: build your own picture library; select a picture to search in the library yourself, and get several pictures similar to it.

As a similarity search engine for massive feature vectors, Milvus aims to help analyze increasingly large unstructured data and discover the great value behind it. In order to allow Milvus to be applied to the scene of similar image retrieval, we designed a reverse image search system based on Milvus and image feature extraction model VGG.

This article is divided into the following parts:

Note: You can also use other image data set. The currently supported image formats are .jpg format and .png format.

The webserver is mainly composed of two parts, the image feature extraction model VGG and the vector search engine Milvus. The VGG model converts images into vectors, and Milvus is responsible for storing vectors and performing similar vector retrieval. The architecture of the webserver is shown below: 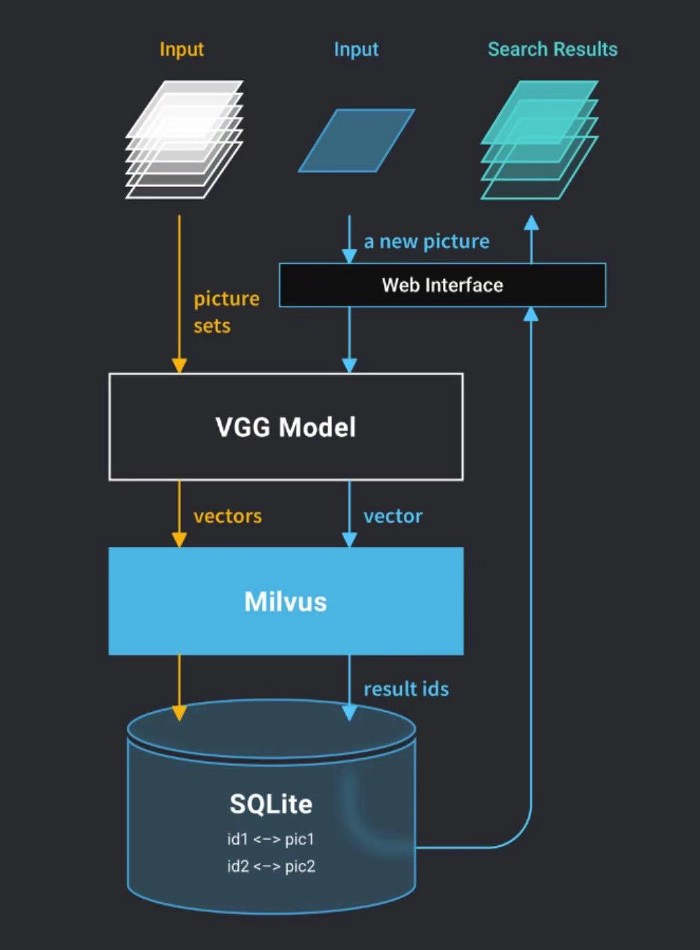 VGGNet was proposed by researchers from the University of Oxford’s Visual Geometry Group and Google DeepMind. It is the winner in the localization task and the 1st runner-up in the classification task in ILSVRC-2014. Its outstanding contribution is to prove that using a small convolution (3 \ * 3) and increasing the network depth can effectively improve the model’s performance. VGGNet is highly scalable and its generalization ability to migrate to other data sets is very good. The VGG model outperforms GoogleNet on multiple transfer learning tasks, and it is the preferred algorithm for using CNN to extract features from images. Therefore, VGG is selected as the deep learning model in this solution.

VGGNet explored the relationship between the depth of CNN and its performance. By repeatedly stacking 3 \ * 3 small convolution kernels and 2 \ * 2 maximum pooling layers, VGGNet successfully constructed CNNs with a depth of 16–19 layers. The VGG16 model provided by Keras’s application module (keras.applications) is used in this solution.

VGG16 contains 13 Convolutional Layers, 3 Fully Connected Layers, and 5 Pooling Layers. Among them, the convolutional layer and the fully connected layer have weight coefficients, so they are also called weighting layers. The total number of weighting layers is 13 + 3 = 16, which explains why the structure is called VGG16. (The pooling layer does not involve weights, so it does not belong to the weighting layer and is not counted). 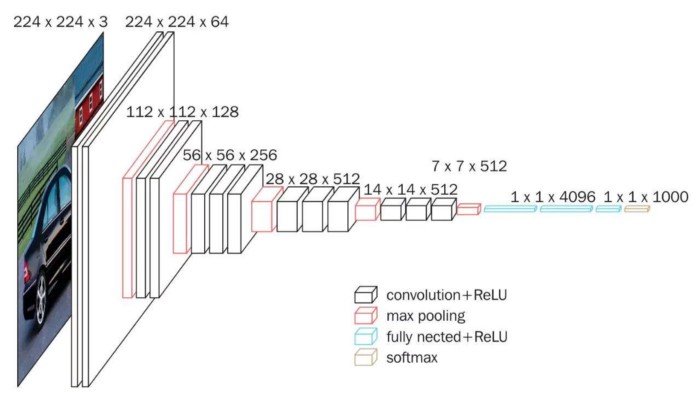 The convolution layers and pooling layers of VGG16 can be divided into different blocks, which are numbered Block1 ~ Block5 in order from front to back. Each block contains several convolutional layers and a pooling layer. For example: Block2 contains 2 convolutional layers (conv3–256) and 1 pooling layer (maxpool). And in the same block, the number of channels of the convolutional layer is the same. According to the VGG16 structure diagram given below, the input image of VGG16 is 224x224x3. During the process, the number of channels doubles, from 64 to 128 progressively, and then to 256, until finally to 512 which no longer changes. The height and width of the image halve from 224 → 112 → 56 → 28 → 14 → 7.

VGG has a simple structure, but it contains a large number of weights, reaching 139,357,544 parameters. These parameters include convolution kernel weights and fully connected layer weights. Therefore, it has a high fitting ability.

The webserver of the entire system provides five APIs that correspond to train, process, count, search, and delete operations. Users can perform image loading, load progress query, Milvus vector number query, image retrieval, and Milvus table deletion. These five APIs cover all the basic functions of the reverse image search system. The rest of the article will explain in detail each of these functions.

The parameters of the train API are shown in the following table:

Before performing similar image retrieval, you need to load the image library into Milvus, and then call the train API to pass the path of the image to the system. Because Milvus only supports the retrieval of vector data, it is necessary to convert the images to feature vectors. The conversion process is mainly achieved by using Python to call the VGG model:

After obtaining the feature vectors of the images, import these vectors into Milvus using Milvus’s insert_vectors interface:

After importing these feature vectors into Milvus, Milvus will assign a unique id to each vector. In order to better find the image based on the vector id during subsequent retrieval, you need to save the relationship between the vector ids and the corresponding images:

The method of the process API is GET, and no other parameters need to be passed in the call. The process API can be called to view the progress of image loading, for example, the number of converted images that have been loaded and the total number of images in the incoming path.

The count API’s method is POST, and no other parameters need to be passed in the call. The count API can be called to view the total number of vectors in the current Milvus. Each vector is converted from an image.

The parameters of the search API are shown in the following table:

Before importing the image you want to query into the system, call the VGG model to convert the images to vectors first:

The delete API’s method is POST, and no additional parameters need to be passed in the call. The delete API can be used to delete the tables in Milvus and clean up the previously imported vector data.

First, pull the Milvus bootcamp code, then use the Dockerfile we provided to build the image of the webserver:

Of course, you can also directly use the image we uploaded to dockerhub:

First pull the Milvus bootcamp code, then use the Dockerfile we provided to build the image of webclient:

Of course, you can also directly use the image we uploaded to dockerhub:

When the above deployment procedures are completed, enter “localhost: 8001” in the browser to access the reverse image search interface. 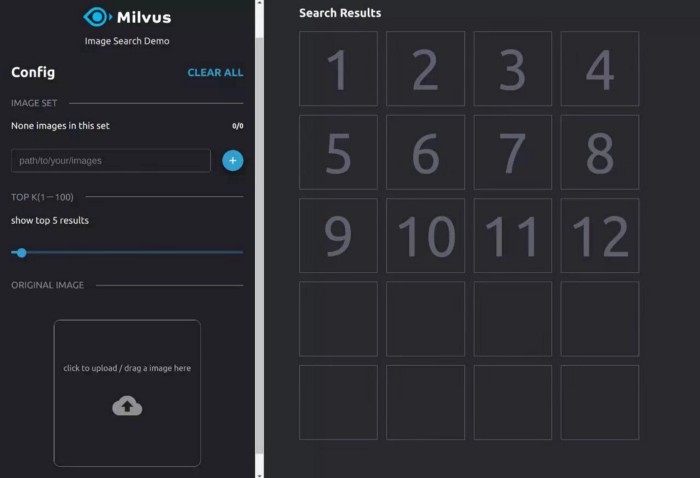 Fill in the path of the images, and wait until all the images are converted to vectors. Load the vectors into Milvus, and you can get started with your image search: 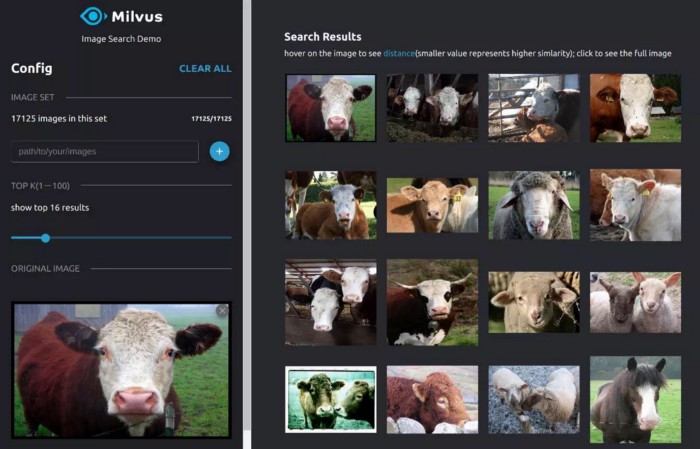 This article demonstrates how to use Milvus and VGG to build a reverse image search system. Milvus is compatible with various deep learning platforms, and searches over billions of vectors take only milliseconds. You can explore more AI applications with Milvus!

If you have any suggestions or comments, you can raise an issue on our GitHub repo or contact us on the Slack community.

For more information about the VGG model, please visit: