This article describes how to implement an IoT notification system. A notification is a way we can send alarms or other kinds of information to users. This post details, step by step, how to build an IoT notification system using a few lines of code and integrating existing cloud platforms. The aim is to send a notification to several devices, such as Android, iOS, or a desktop PC. This IoT project uses an ESP8266, but you can use other IoT development boards to test it like the Arduino UNO, MKR1000, other ESPs, and so on.

This is an interesting project because it is possible to further extend, and we can use it in several scenarios where it is necessary to send a notification or an alert:

And so on. They are just a few examples where it is possible to use this IoT notification project.

The idea that stands at the base of this project is building a general purpose IoT notification system that you can reuse in other scenarios, without writing too much code.

We have covered the notification topic in several other tutorials. For example, we have already described how to send notifications using Google Firebase. Moreover, it is possible to use other IoT development boards to implement a notification system.

Before diving into the project details, it is useful to have an overview of this project and the components that we will use. To make things simple, the aim is to monitor temperature and air pressure and send those readings periodically using a notification message. The project overview is shown below:

For the sensor, the project uses BMP280 — an I2C sensor. There is a library to use in order to exchange data with this sensor. You can download it from GitHub or import it into your IDE.

PushingBox is an interesting cloud platform that simplifies the process of sending data. It exposes a simple API that our IoT notification system uses to trigger the notification.

It is possible to divide this project into two different steps:

The first step is configuring the notification system so that the ESP program can invoke an API exposed by PushingBox and trigger the process of sending the notification. I suppose you already know the Pushbullet cloud platform and you have already an account. If not, you can register for free and activate your account.

This is the API key we will use later in the project. Now it is time to configure PushingBox in order to receive the notification call from the ESP and trigger the notification. If you do not have one, you have to create a free account. Once you are logged in, in the dashboard, select My Services to add Pushbullet as service:

The next step is creating the scenario, or in other words, the content of the message we want to send:

That’s all. In a few steps, we have configured all the systems that this IoT notification project will use to send the notification. Save the deviceID because we will use it later.

The last step is implementing the sketch that reads the temperature and the pressure from the sensor and triggers the notification. This is quite simple because we can use a library that simplifies our work.

The connection schema is shown below:

In the first step, let us read the sensor data:

Now in the loop method, we can read the data:

Finally, we can focus on the last part of this project — connecting to the PushingBox API. Add the following lines at the beginning:

And add the following method, which connects to the PushingBox API:

Notice that, in the code above, the sketch sends three different parameters:

The last two parameters will be used by the notification system in the message template to replace the $temp$ and $press$ with the current values measured by the sensor.

It is time to test this IoT notification project. Just upload the sketch into your ESP and wait for the notification that should arrive in a few seconds. The final result is shown below in case you use the Pushbullet Chrome extension:

While if you enabled the smartphone notification, you will get: 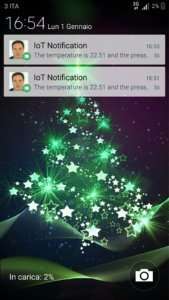 At the end of this tutorial, you, hopefully, gained the knowledge of how to develop an IoT notification systems that sends messages to several devices using a few lines of code. As stated above, this IoT notification tutorial can be further extended, and we can use it in several scenarios.