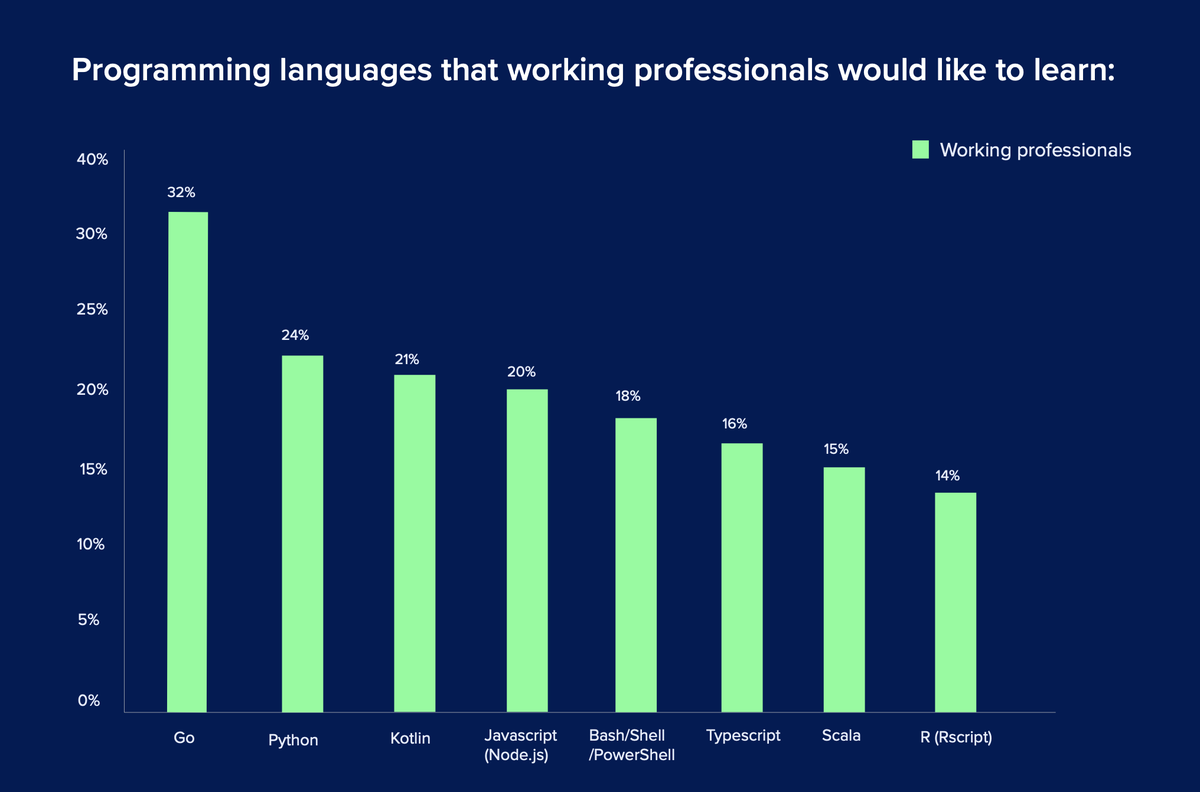 To give context, the entire DevOps and container ecosystem is built on the back of the Go programming language. Today, countless companies heavily utilize Go and developers these days to learn Go as one of their primary languages.

Both Docker and Kubernetes — two of the most popular open-source projects are both written in Go. Many new DevOps tools coming out these days are completely written in Go, and it is the language most of the DevOps enthusiasts would love to learn.

Go is attractive because of the many features

Go offers great concurrency primitives and hence makes it extremely simple to implement a concurrent system. Go supports concurrency at the language level. The basic unit for this in Go is a go routine. Go routines are lightweight threads of execution. Generating a go routine is very easy, as easy as adding the go keyword before a function.

Go codes are straightforward and simple. Developers don’t have to worry about complicated and hard identifying errors from the vast number of variable types like in more dynamic languages. Golang garbage collector notices which objects are out of scope and cannot be referenced anymore and frees the memory space they consume. This process happens concurrently while a Go program is running and not before or after the program's execution.

Binaries (software artifacts) will be generated for your applications in Go with all the dependencies built-in. It removes the need to install runtimes that are necessary for running any application. This alleviates the task of deploying applications and implementing essential updates across thousands of installations. The big wow factor is Go supports multiple OS and processor architectures.

Unit testing is right in the Go language itself. It presents a simple mechanism to write the unit tests in parallel with our code. The Go tooling also provides support to understand code coverage by our tests, benchmarking tests, and writing example code used to generate our code documentation.

Go features that make it good for DevOps

Package management is one of the important things Go missed for a long time. One of the major drawbacks of Go's 'go get' was the absence of support for handling dependency versions and facilitating reproducible builds.

A Go Module is a way to group a set of packages and give it a version number to identify its existence (state) at a specific point in time.

It can be challenging to choose the right Go module for any new Go developer. There are plenty of great options open when deciding your Go Module, and this can be made simple by considering three fundamental parameters:

At gocenter.io, there is a free repository of over 700,000 versioned Go Modules that can help you choose the right module for your project/use case.

To improve the state of dependency management in Go, GOPROXY is enabled by default in Go v1.13. A GOPROXY controls the source of your Go module downloads and assures that builds are deterministic and secure.

A public GOPROXY is a centralized repository accessible and available free to Golang devs and enthusiasts worldwide. This hosts open-source Go modules that have been made public from third party sources in publicly accessible VCS project repositories.

In this blog, ‘Go at Full Speed with GoCenter’ you will know more about how GoCenter empowers the Go community to reliably generate reproducible builds of their Go applications.

JFrog Xray’s security vulnerability scanning of Go modules has recently been added to GoCenter.io! GoCenter automatically scans for known vulnerabilities recognized in the public vulnerability database NVD. Those results are stored in GoCenter and exposed on the Security page of the UI, which will list all vulnerabilities that exist in the module version. Learn more about 'GoCenter Reveals Go Module Vulnerabilities With Xray'.

To know more about Go Modules security, you can read this article ‘Go Modules Security’

The Go ecosystem was missing standardization – there was an absence of a standard tool for dependency management, and hence, developers could not create reproducible builds with Go, which was a huge drawback working with Go projects and became quite an issue. After several years, Google eventually solved this issue by adding versioning support for Go.

Additionally, the release of Artifactory 5.11 added support for Go registries giving the community various capabilities when developing with Go.

Go applications are a single binary with dependencies included, lending themselves to build promotion for DevOps. Build once and promote throughout is one of the best practices when it comes to Go projects CI/CD best practices.

Building the Go-based microservices once, and promoting them to the next stages once promotion criteria such as tests and scans are met. When you intend to containerize your Go microservice, the same principle applies: 'Build once and promote' - That means building each Docker image once and promoting it through a series of staging repositories. Like this, you can ensure that what was tested is exactly what is being released to production.

The software delivery life cycle has changed dramatically. Containers and microservices architectures have become an answer to unlock application agility and modernization. Modern apps must be designed with cloud-native principles in mind and take advantage of cloud platforms' loosely coupled cloud services.

Go is an explicit language, specially designed with these new requirements in mind. Go is growing in popularity because of its unmatched simplicity, features like garbage collection, concurrency, etc.

Go is a perfect choice for any firm that is starting out its DevOps journey. Go's inherent features help enable the best practices for DevOps: immutable packages, testing, build promotion, security, etc. GoCenter is also a great resource for Go developers, providing always-available immutable access to dependencies with important metrics.

Explore GoCenter to see how it demonstrates these important DevOps principles.

Combined, a very powerful way to practice strong DevOps. Golang has become an ideal choice for developers working with open-source technology and DevOps projects; it has an excellent combination of concurrency, safety, and simplicity. It is undoubtedly an amazing programming language for writing web services and has the ability to integrate easily with other services. Top enterprise organizations are using Golang for their software development. Some worldwide popular companies that use Golang are Uber, YouTube, Google, BBC, Dailymotion, Adobe, etc. Since the market for Golang is still growing, it seems that the future continues to support this demand.