Today, in this article, we will discuss the most significant features of Angular Framework i.e. Feature Modules. With the help of Angular Framework, we can develop both large-scale based application or small scale based application. Actually,  with the help of Angular Modules, we can be designed our application into a part of different modules so that we can manage the application in a much better way. Since, if we use one single block or module for our application, then when the application starts growing to incorporate the new features and functionalities, it becomes a tedious job to manage the entire mode under a single block or module. In the same place, if we use multiple modules or blocks, then the maintenance of the code is easier. In this way, we can incorporate the new functionality or features in a new module and then include that module in our application.

So, in this article, we will discuss the concept of Feature Modules and the Lazy loading of a Feature Module and also demonstrate how to implement this concept into any Angular Application.

What Is Feature Modules in Angular?

So, in Angular Framework, Feature Module is simply an Angular module with module related kinds of stuff and purpose. But the main difference is that is not the root module of the application. Feature module is just an additional typescript based class with the @NgModule decorator and registered metadata. Feature modules isolate the applications based on the functionality or business operation and it collaborates with the root modules or any other feature modules.

The main purpose of the feature modules is to break down the functionality which focuses on any particular internal business operation or functionality that needs to be dedicated as a module so that we can achieve modularity in the application. With the help of feature modules, we also can restrict the responsibility of the root modules and help the root module to keep it thin and small. 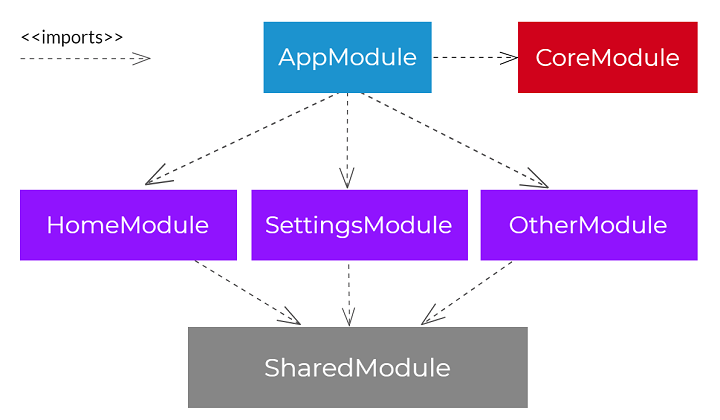 Every feature module always have the following functionalities–

Now, in the above section, we discuss the concept of the Feature module in any Angular application. So, before going to implement or demonstrate the feature module, we first need to understand what the benefits of feature module implementations are –

The lazy loading technique is not a new one introduced by the Angular Framework.  It is a process or method to download the data on-demand, say, for example, Documents, JavaScript files, CSS, Images, and Videos in small pieces. This process or method normally performs the data loads operations in chunks instead of bigger pieces to improve the performance of the application.

Normally, we already included all the feature modules within the root module with the help of the import statement. So, when the application starts, all the files related to the modules defined or imported within the root modules will be downloaded first and then the application loading will be completed. If that file size is large, then application initial loading will take time since it will be complete only when the downloading part is complete. This type of loading is normally known as eager loading.

The standard import syntax in eager loading is always static. That’s why it always evaluated all code at the load time. In this circumstance, if we want to load a particular module conditionally or on-demand, then we need to use the dynamic import instead of static import. This dynamic import concept is normally known as the Lazy loading of angular modules. With the help of Lazy loading, we can shrink the size of the application as only required modules will be loaded by the browser at the startup. The rest of the modules will be downloaded and loaded dynamically on-demand concept.

So, as per the Angular Framework, if we are using the eager loading technique, then if the application consists of many or a large number of components, it will take a long time to load all components when an app is a download. Due to this, the user experience related to the application will be degraded. So, if we consider that first impressions are the last impressions in the case of any application, then it will be a very serious issue.  So, to overcome this limitation of eager loading, Angular Framework has introduced the Lazy Loading strategy. In this process, it loads only those components which are required to render the page. So, it saves time and renders the application much faster than the eager loading. Lazy loading also has many benefits like –