Being an itinerant programmer one of the things I've noticed over the years is that every project you come across seems to have a slightly different way of organising its Maven modules. There seems to be no conventional way of characterising the contents of a project's sub-modules and not that much discussion on it either. This is strange, as defining the responsibilities of your Maven modules seems to me to be as critical as good class design and coding technique to a project's success. So, in light of this dearth of wisdom, here's my two penneth worth...

When you first come across a new project, you'll generally find a layout convention that vaguely matches that defined by the Better Builds With Maven manual. The 'clean' project directory usually contains a POM file, a src folder and several sub-modules, each in their own subdirectory, as shown in the diagram below: 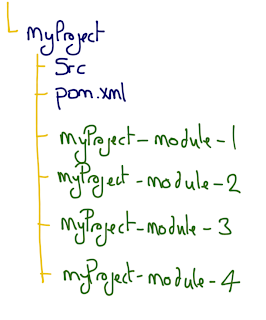 If we all agree that this is the standard way of approaching the top level of project layout (and I have seen it done slightly differently) then there seems to be three different approaches taken when organising the responsibilities of each of a project's sub-modules. These are:


I'm not going to linger on those projects that are organised seemingly without any structure or order except to say that they probably started off well organised but were not designed well enough to endure the changes forced upon them.

In saying that a project's sub-modules are organised 'by class type', I mean that modules are used to group together all classes that comprise, but are not limited to, a layer in the program's architecture. For example a module could contain all classes that make up the program's service or persistence layers or a module could contain all model class (i.e. beans).

Conversely, in saying that a project's sub-modules are organised by functional area I'm talking about a situation where each module contains, as close as possible, a vertical slice of the application, including model beans, service layer, controllers etc.


If the truth be told then there are any number of ways to organise your project's sub-modules. Most project set-ups are fairly flat in structure, which is what I've demonstrated above; however, if you take a look at Erik Putrycz's 2009 talk  Maven – or how to automate java builds, tests and version management with open source tools, he demonstrates that you can have modules within modules within modules.
In order to explore this a little further, I'm going to invent my usual preposterously contrived scenario and in this scenario, you've got to write a program for a Welsh dental practice owned by a man called Jones also known locally as 'Jones The Driller'. The requirements would be pretty standard, I suspect, for a dental practice and would include handling:


As a solution to Jones The Driller's problem, you propose that you write a multi-module web application based upon Spring, MVC and tomcat that, when assembled, has a standard 'n' tier design of a mySQL database, a database layer, service layer, a set of controllers and some JSPs that comprise the view. In creating your project your idea is to organise your sub-modules 'by class type' and you come up with the following module organisation, shown below roughly in build dependency order

Your dentists-model module contains the project's beans that model object used from the persistence layer right up to the JSPs. dentists-repository, dentists-services and dentists-controllers reflect the various layers of your application, with dentists-web module containing all the JSPs, CSS and other view paraphernalia. As for dentists-utils, well every project has a utils module where all the really useful, but disparate classes end up.

Meanwhile, in a different universe, a different version of you decides to organise your project's sub-modules by functional area and you come up with the following breakdown:


In this scenario, the build order is somewhat different; virtually all modules will depend upon dentists-utils and, depending upon your exact audit requirements, most modules will rely upon dentists-audit. You can also see in the following images that the sub-module package structure has been arranged on layer and type boundaries in that each module has its own model, repository (which contains interface definitions only) services and controller packages and that the layout of each module is identical at the top level.

Another discussion to have here is the organisation of your project's package structure, where you can ask the same kind of questions: do you organise 'by class type' or 'by functional area' as shown above?
You may have noticed that the dentists-repository modules can be fairly near the end of the build cycle as it only contains the implementation of the repository classes and not their interface definitions. You may have also noticed that dentists-web is again a separate module. This is because you're a pretty savvy business guy and in keeping the JSPs etc. in their own module, you hope to re-skin your app and sell it to that other Welsh dentist down the road: Williams The Puller.


From a test perspective, each module contains its own unit tests, but there's a separate integration test module that, as it'll take longer to execute can be run when required. There are generally two ways of defining integration tests: firstly by putting them in their own module, which I prefer, and secondly by using a integration test naming convention such as somefileIT.java, and running all *IT.java files separately to all *Test.java files.
Your two identical selves have proposed two different solutions to the same problem, so I guess that it's now time to takes a look at the pros and cons of each.

Taking the 'by class type' solution first, what can be said about it? On the plus side, it's pretty maintainable in that you always known where to find stuff. Need a service class? Then that's in the dentist-service module. Also, the build order is very straight forward. On the down side, organisation 'by class type' is prone to problems with circular dependencies creeping in and classes with totally different responsibilities are all mixed up together making it difficult to re-use functionality in other projects without unnecessarily dragging in the who shebang.

So, what about the pros and cons of the 'by functional area' approach? To my way of thinking, given the package structure of each module, it's just about as easy to locate a class using this technique as it is when using 'by class type'. The real benefit of using this approach is that it's far simpler to re-use a functional area of code in other projects. For example, I've worked on many projects in different companies and have implemented auditing several times. Each time I implement it I usually do it in roughly the same way, so wouldn't it be good just to reuse the first implementation? Not withstanding code ownership issues... The same idea also applies to dentists-user-details; the requirement to manage names and addresses applies equally as well to a shoe sales web site as it does a dental practice. And the downside? One of the benefits of this approach is that the modules are highly decoupled, but from experience no matter how hard you try, you always end up with more coupling that you'd like.

You may have already spotted that both of these proposals are not 100% pure; 'by class type' contains a bit of 'by functionality' and conversely 'by functional area' contains a couple of 'by class type' modules. This may be avoidable, but I'm purposely being pragmatic. As I said earlier you always see a utils module in a project. Furthermore creating a separate database module allows you to change your project's database implementation fairly easily, which may make testing easier in some circumstances and likewise, having a separate web module allows you to re-skin your code should you be lucky enough to sell the same product to multiple customers with their own branding.

Finally, one of the unwritten truths in software development is that once you've organised your project into its sub-modules you'll rarely get the opportunity to reorganise and improve them: there usually isn't the time or the political will as doing so costs money; however, it should be remembered that, in Agile terms, project module composition is, like code, a form of technical debt, which if done badly also costs you a lot of cash. It therefore seems a really good idea, as a team, to plan out your project thoroughly before starting to code. So be radical, do some design or have a meeting, you know it'll be worth it in the end.