Attribute filtering, or simply "filtering," is a basic function desired by users of vector databases. However, such a simple function faces great complexity.

Suppose Steve saw a photograph of a fashion blogger on a social media platform. He would like to search for a similar jean jacket on an online shopping platform that supports image similarity search. After uploading the image to the platform, Steve was shown a plethora of results of similar jean jackets. However, he only wears Levi’s. Then the results of image similarity search need to be filtered by brand. But the problem is when to apply the filter? Should it be applied before or after approximate nearest neighbor search (ANNS)?

This article intends to examine the pros and cons of three common attribute filtering mechanisms in vector database and then probe into an integrated filtering solution offered by Milvus, an open-source vector database. This article also provides some suggestions about filtering optimization.

Generally, there are three types of attribute filtering: post-query, in-query, and pre-query filtering. Each type has its own pros and cons.

As its name suggests, post-query filtering applies filter conditions to the TopK results you obtain after a query. For instance, in the case mentioned at the beginning, the system first searches for the most similar jean jackets in its inventory. Then the results are filtered by its brand metadata.

However, one inevitable shortcoming of such attribute filtering strategy is that the number of results with metadata satisfying the condition is highly unpredictable. In some cases, we cannot get enough results as we wanted. Because if we want TopK (K=10) results, but after applying the filter, those vectors whose metadata does not meet the requirement will be eliminated. Therefore, we will get less hits than intended. In some worst-case scenarios, we will get no results at all after applying post-query filtering.

What if we increase the number of returned query results? We certainly can get enough results even after applying the filter condition. Nevertheless, we risk being overwhelmed by an excessive amount of results, which may burden the system as the filter condition needs to be applied to the massive similar vectors.

In-query filtering is a strategy in which ANNS and filtering are conducted at the same time. For instance, in the case of online shopping, images of jean jackets in inventory are converted into vectors and in the meantime, the branding information is also stored in the system as a scalar field together with the vectors. During search, both vector similarity and metadata information need to be computed. 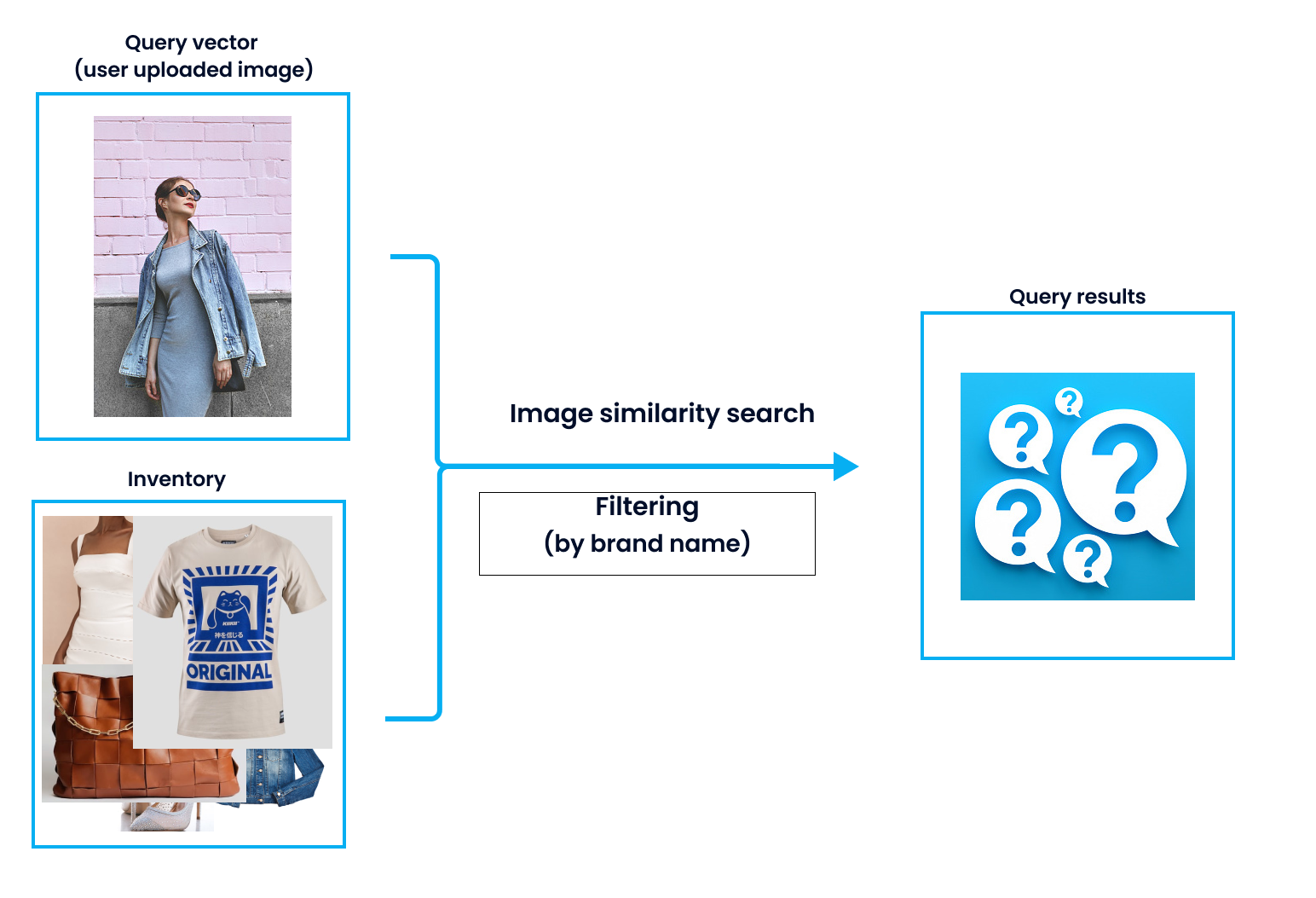 Though one possible solution to OOM is to reduce the peak memory usage by increasing the number of segments, too many segments will lead to a worse performance of the vector database. In addition, such practice of increasing segments is not suitable for databases that store data in a column-based way as it can result in random memory access during program execution.

But on a different note, in-query filtering might be a good choice for those databases that store data in a row-based way.

Pre-query filtering sounds like a plausible solution. However, it has its own shortcomings, as it slows down the search process. Since all data need to be filtered before proceeding to ANNS, the pre-query filtering strategy requires more computation. Therefore, its performance might not be as good as the other two strategies mentioned above.

A bitmask is an array of bit numbers (“0” and “1”) that can be used to represent certain data information. With bitmasks, you can store certain types of data compactly and efficiently as opposed to store them in ints, floats, or chars. The bitmask works on Boolean logic. According to Boolean logic, the value of an output is either valid or invalid, usually denoted by “1” and “0” respectively. “1” stands for valid, and “0” for invalid. Since bitmasks are highly efficient and can save storage, they can also be used to achieve many functions such as attribute filtering, delete operations, time travel, and more.

In the Milvus filtering solution, the bitmask can be seen as an additional data field. If the metadata of a vector satisfies the filter condition, the vector will be marked as “1” in its bitmask field. Those vectors whose metadata does not meet the requirement will be marked as “0” in its bitmask. When all the metadata of the dataset are evaluated against the filter conditions, a bitmask only comprising of “1” and “0” will be generated. In Milvus, this filtering bitmask will be combined together with other bitmasks, such as deletion bitmask or time travel bitmask, and ultimately passed to the underlying computing engine. During ANNS, those vector data marked with “0” in the final bitmask will be ignored. 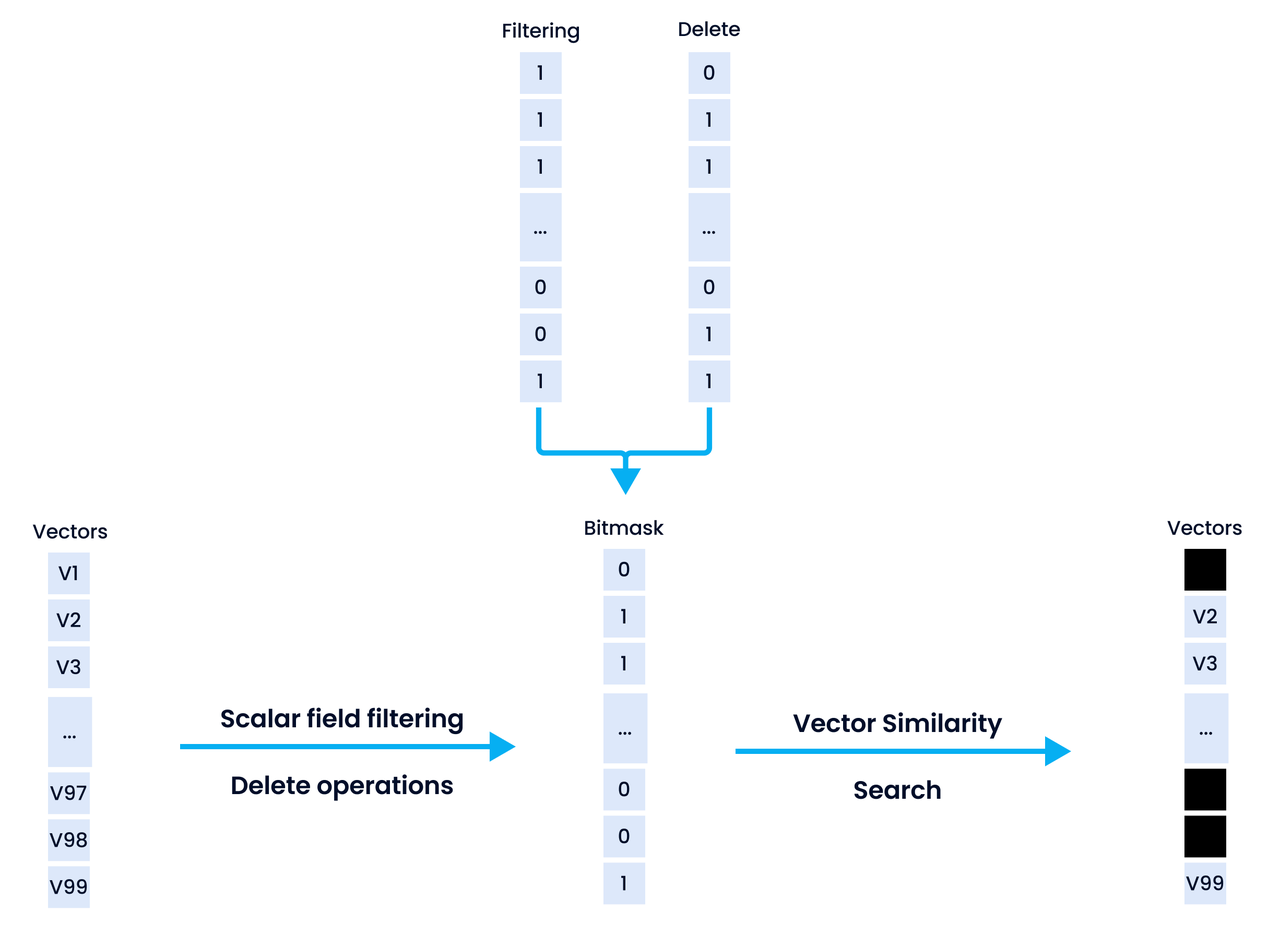 The Milvus filtering solution has the following benefits:

Despite the aforementioned benefits, more work can be done to further optimize the attribute filtering mechanism.

Published at DZone with permission of Angela Ni. See the original article here.