i have deliberately created a failing test. obviously deliberately since i would never ever create such simple issues in code. i’m far too experienced for that. :)

even though these issues were created deliberately i still need to know how to debug code. in this blog post i’ll describe how i debug java using intellij.

i have some code which fills a dynamic array with “*” to simulate a set of ‘pixels’ — which can be whatever. but it doesn’t work.

it throws an error on the line:

it will be fairly obvious to most people what is going on, but if i put a breakpoint on the line that is failing then i can debug the @test method and step through the code to see what is going on.

then run in debug mode. 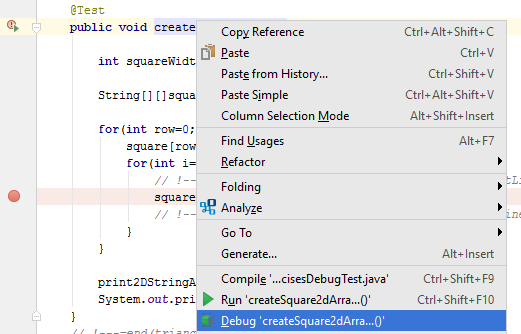 when the test is running in debug and has stopped at a breakpoint, i can:

i can also highlight code and “evaluate expression”. 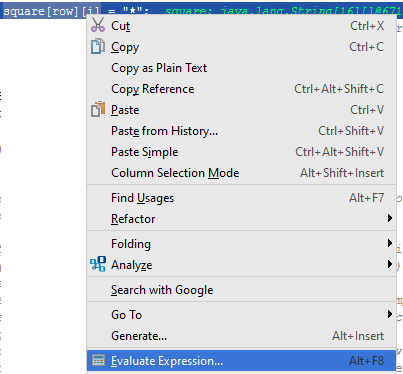 that indexoutofboundsexception seems suspiciously close to the error i saw when i ran the test. i could add a ‘watch’ for i even though it is obvious in the variables list by clicking the green + symbol in the ‘watch’ section.

so if i step through until i==16 then i can also see in the variables list the exception will be thrown - even though the line hasn’t executed yet.

and accidentally left a +1 in the loop condition. i fix that.

and then i have a problem in my next method.  instead of printing out a 16x16 square of * it prints out:

and here is the horror in all its glory:

i decided to “get fancy” and use iterators and lists instead of just for loops with arrays. but i didn’t get fancy enough. i should have wrapped my print2dstringarrayiterators with @test methods and made sure it worked before i used it.

but i didn’t do that. so i have to debug it instead.

if i breakpoint the line where the method is called:

then i can “step into” the method and debug from there. and as i step through the method, the problem is obvious - the break; that i added by mistake. ok. so these were pretty poor examples, but, they are also very similar to code examples that i’ve received emails from, and probably wrote myself back in the day (monday, or yesterday, or something).

try it and see.