I had written Customer Store Mean Stack app that performs simple basic CRUD (Create, Read, Update, Delete) operations on the Customer model sometime back which I will be dockerizing here.

If you have some basic idea about Docker or have just heard about it and want to learn how to dockerize Mean Stack app then this article is for you.

In brief, Docker is an open source DevOps tool designed to help developers and operations guys to streamline application development and deployment.

By doing so application can be deployed on any target environment/machine regardless of any customized settings that machine might have that could differ from the machine used for writing and testing the code.

Thus removing the deployment issues that occur due to various environment spec mismatch. To learn more about docker checkout this link.

Docker machine is a small Linux VM that hosts the Docker Engine which is a client-server application consists of Docker Daemon and Docker CLI that interacts with Docker Daemon to create Docker images or running containers etc.

Since I have Docker Toolbox installed so I will choose the easy way and click on the Quick Start Terminal icon that will open the terminal and launch the Docker machine for me. 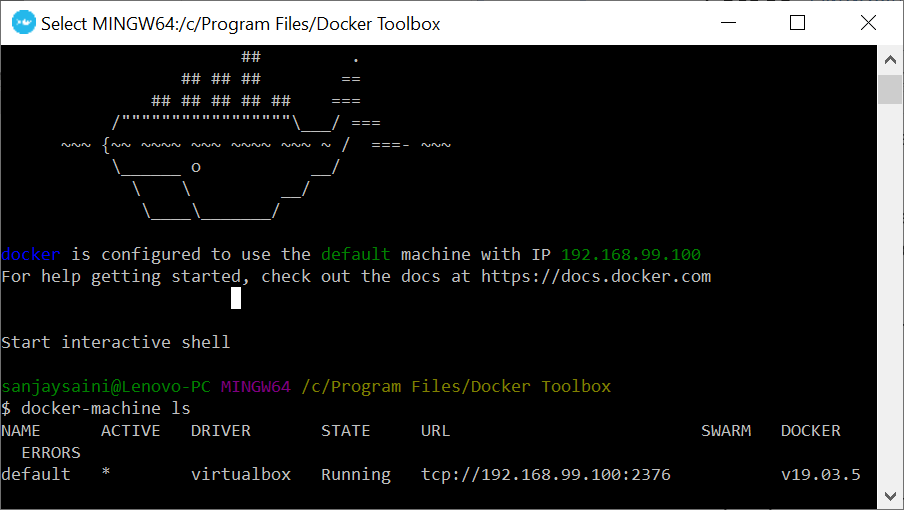 You can run following docker-machine CLI command to check the Docker machine details and note the URL that we will use to open our Mean Stack app in the browser.

You can do much more with docker-machine CLI commands like create, kill, start, stop Docker machine and much more but that is not in scope for this article however you can check-out docker.com for complete documentation on docker-machine CLI and also docker CLI as well.

Since now our Docker setup is up and running now we will focus on dockerizing our Mean Stack app.

As per our approach, we will perform the following steps to dockerize our app.

First, we will create Dockerfile for our Client and Server in their respective folders which will be used to create a Docker image for these components.

So in the terminal window change directory to the client folder of you app and create a file name “Dockerfile” without any file extension using any dev editor like VS Code or just use Notepad.

Although it’s not necessary to have this file but it’s a good practice to have it since it can speed up image build process and also keep the image lean by excluding the unnecessary code from the Docker build context so that it doesn’t get into the image.

So just the way we created Dockerfile at the same location we create .dockerignore file and add the following items that we don’t want to be copied into our docker image.

Now in the terminal window change directory to server folder of you app (in my case its root folder of the app) and create another “Dockerfile” as we created for Client.

Here we are copying our server code in the “app” folder and installing server dependencies from the package.json file and creating a production build using Node image. Last we instruct to run the server when container is run.

Like we did for Client, create .dockerignore file, and add the following items that we don’t want to be copied into our docker image.

If you have separate folder for client and server code at the app’s root folder then no need to add client in the .dockerignore file.

Mean Stack app runs in multi container setup since it has multiple component as we discussed earlier we use Docker Compose tool to create a Docker images that spin off multiple containers from single command.

With the Docker Compose tool we define all the components of the app as services in the docker-compose.yml file and build Docker images (if not available) of each component. To learn more about Docker Compose check out this link.

So in the terminal window change directory to root folder of the app and create docker-compose.yml file.

Write the following instructions in the docker-compose.yml and save it.

We start with the version of the docker-compose file followed by the services section in which we define all the components of our app.

First, we defined the mongo-db service with the official mongo image which will be pulled from Docker Hub and will be used to run the container along with the port at which service will accessible to the server.

Next, we defined server by providing build context as dot since our server code and Dockerfile is in the current folder. We also provide the image name (change it appropriately) that will be built and the port at which server will be accessible by the client. We also linked this service with the mongo-db service since the server container will access MongoDB database in the separate mongo-db container

Finally, we defined the client by providing a build context as the client folder that contains client code and Dockerfile.  We also provide the image name (change it appropriately) that will be built and the port at which client will be accessible by the host.

A minor code change needs to be done in the server where you are setting the connection string to mondoDB.

When we run our dockerize app each component will be running in separate container so server container will access the mongoDB hosted in the mongo-db container therefore we need to replace the *localhost* from the connection string with the mongo-db in the code.

Now run docker-compose build command to build Docker images of services defined in the compose file that we have just created. 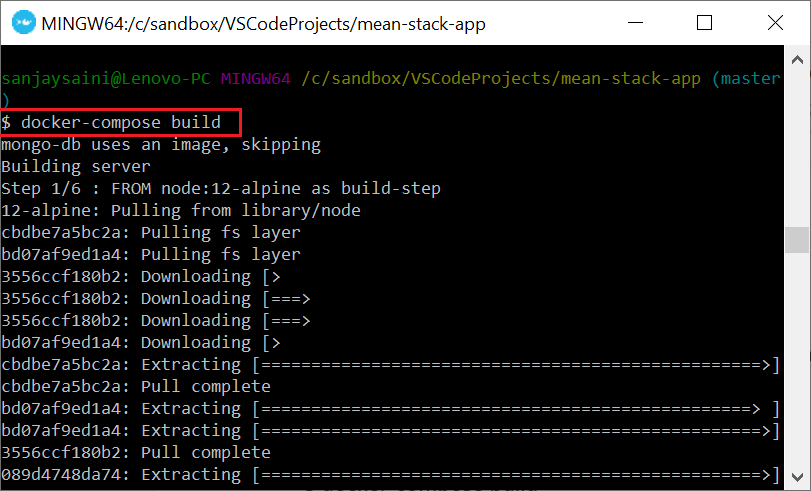 This process will take some time to complete and at the end you will get successful message with image tag name for both client and server services we defined in the compose file.

Note that the process skipping mongo-db service since we are using already built official image in the compose file. 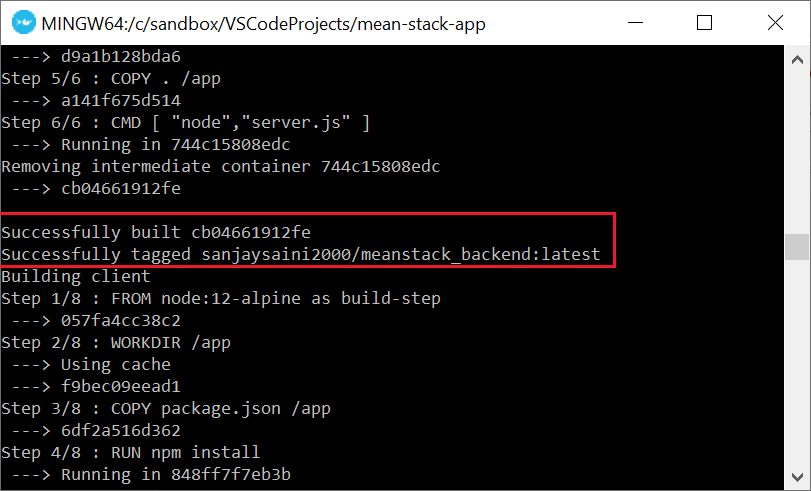 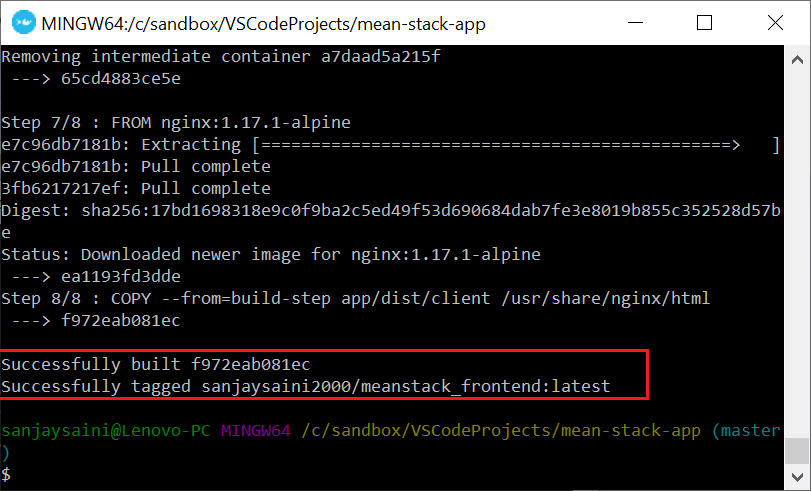 After build process is complete, you can run following Docker command to list the images created along with your client and server services images.

You will also find node and nginx images that we used in the Dockerfiles of client and server components of our app and an intermediate image. However these images are not required and can be deleted.

Finally run the following command in the terminal to run your Mean Stack app in the multi container setup with detached mode. 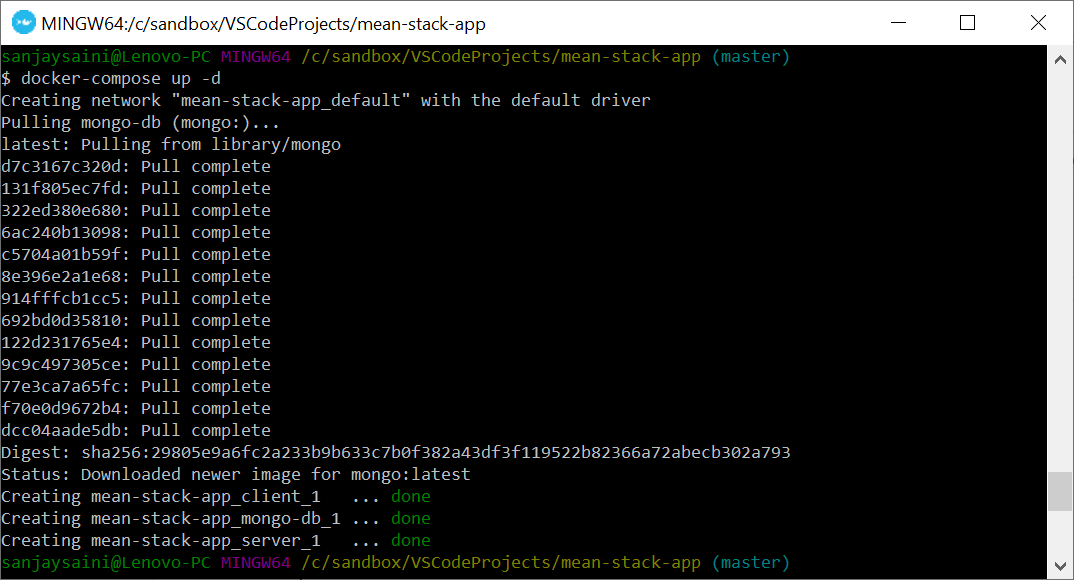 Basically this command will spin off containers in the background as you can see from the screenshot above. It has run containers each one for our three services defined in the compose file. 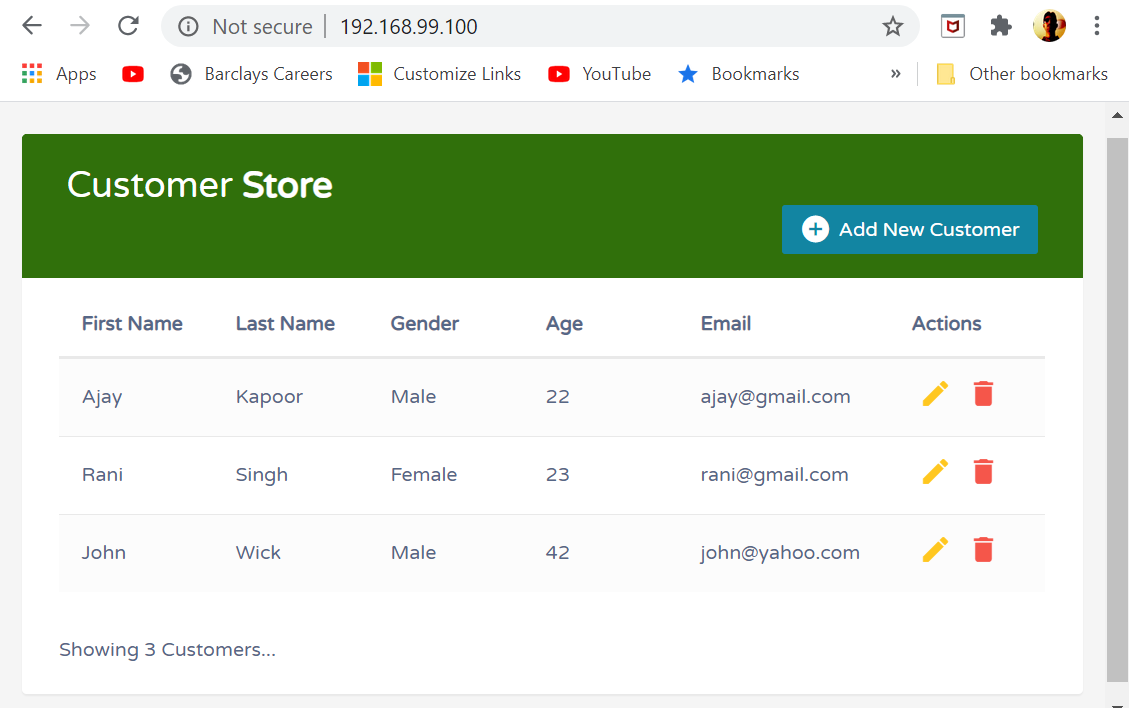 To bring down the app and remove containers run following command.

If you have Docker installed already and don’t have the Mean Stack app or just want to first test run this app without going through this whole process than you can do so by pulling image from my Docker Hub registry from this link with the details about how you can run this app in containers locally.