There is an important distinction around the responsibilities of an integration system and applications. Integration facilitates the transmission of information between systems and may be realized through the use of technologies such as messaging systems, API gateways, and their associated protocols (MQ, AMQP, HTTP, FTP). Over the years, many technology vendors have implemented additional capabilities within their integration products that have enabled developers to add business logic embedded within the integration solution. This has resulted in business logic being spread outside of the application layer and integration an integration system that is often managed and maintained by a single team resulting in a resource bottleneck.

In following a microservice-based architecture that supports a decentralized development model, applications are implemented as independently developed and operated modules that encapsulate business logic. Whilst microservices may connect with other microservices or other systems of record they do so via a communication mechanism that does not hold business logic or manage business state.

Synchronous communication involves the consumer submitting a request to a service and waiting for the service to respond before the consumer can continue executing its process. The technical implementation of this form of communication has evolved over time with sophisticated frameworks and computing capabilities so that an application does not necessarily need to block in whole. From a user experience perspective, a User Interface (UI) may continue to be responsive to interaction whilst a synchronous request has been submitted.

Whilst a synchronous process may utilise different integration styles a common synchronous communication protocol is HTTP, used with the API style of integration. HTTP by nature is synchronous in that a request is submitted (either requesting information or submitting information) and the submitting application waits for the response (either a simple OK or some data in the payload is returned). Modern frameworks ensure the UI or process can continue to operate in parallel to perform other tasks however some thread of execution is blocked to await the response. Typical request/response time frame is ideally measured in milliseconds to a few seconds with timeout set to 30-60 seconds.

Asynchronous communication involves the consumer submitting a message to a service but not needing to wait for the service to respond. A consequence of the message in the form of a new message may be returned to the consumer at some point in the future or not at all. The consumer often does not know the destination service and simply submits the message to a messaging system which then delivers the message to one or more destination services. Asynchronous communication may be realised through different integration styles but is typically implemented using asynchronous protocols such as AMQP, MQ, MQTT, Web Sockets or proprietary binary protocols over TCP sockets such as with Kafka.

Web browsers largely use the HTTP protocol and web applications will include JavaScript that execute within the browser to make API calls over HTTP. Modern JavaScript frameworks can ensure the UI is not blocked when making these synchronous calls. For cases where an asynchronous interaction is required, polling is used by the JavaScript code to determine the presence of response data from the service however asynchronous integration may also be used such as web sockets and MQTT.

An overview of the identified styles and patterns adopted within the Digital Platform are shown in Figure 1 using the definition of style and pattern as:

The following integration styles will be supported by the Digital Platform going forward:

For each of these styles there are various patterns and constraints that will be defined. There are situations where some or all participants in an integration do not support directly connecting with a messaging system. These participants may utilise an intermediary service to perform a translation between an API integration to a messaging interface. 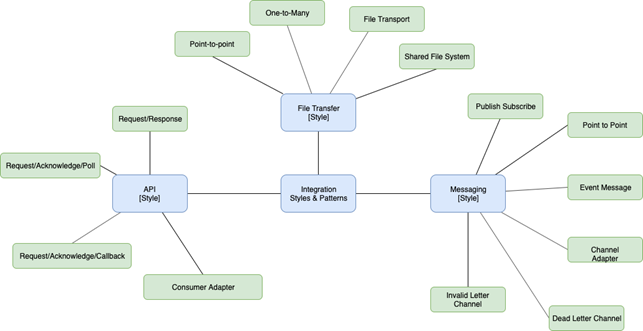 API may be invoked to initiate behaviour and/or exchange information. A consumer may call a target system API directly or through an intermediary.

This style of integration is synchronous in nature and is used where a response is required within a short time frame, typically as a result from a user action or a step in an executing process. API calls may also be used to trigger processes, expose interfaces externally in a secure and restricted manner or act as an intermediary translation style for the messaging integration style.

Information is exported from a source application to a file system as a file in a format such as CSV and picked up by the target system for processing. The file can be directly imported by the consuming file system or transported to a destination file system for the consuming system to retrieve. This style of integration is used where a bulk amount of information may be transferred as part of a batch process often executing at pre-defined times. File Transfer must not be used where API or messaging styles of integration are available and suitable for participant applications.

In order to provide some level of organisational alignment in terms of ownership and accountability, a collection of microservices may be logically grouped to form an application boundary. The application boundary may align to a domain or subdomain, defined by a bounded context through Domain Driven Design. Within this grouping a single or small selection of microservices may be exposed as service interfaces for consumption outside the domain/subdomain. The service interfaces may be API or messaging based. Some service interfaces may be exposed to external parties via an external facing API gateway or even exposed internally via an internal API gateway as managed APIs. Within an application boundary, microservice to microservice communication may be established through a service mesh under a cloud deployment environment where the service mesh provides capabilities such as service discovery and load balancing.

Ideally microservices should be independent, with their own persisted data where appropriate and not relying on calling downstream services in order to fulfil their responsibilities. However, there are cases where some microservices do integrate with other packaged applications or microservices some of which may be provided by external parties.

Packaged applications are typically implemented as monolithic applications. Even though their internal structure may be divided as modules that communicate through some form of inter-process communication or internal messaging system. They are more or less deployed as a single deployment unit and require a vendor to incorporate changes through a re-deployment of the entire package as a whole or through patches. Microservices and packaged applications may co-exist simple through decisions around the allocation of domain responsibilities and associated service composition.

The diagram below illustrates a generalised example of an application architecture that comprises applications integration through the invocation of APIs and/or event based. 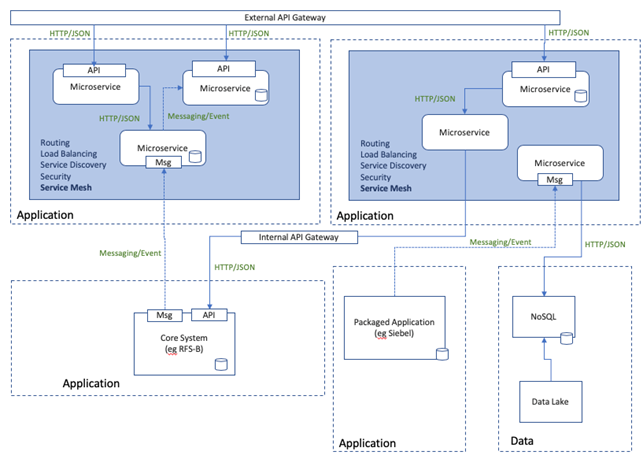 The patterns defined in the table below provide a refence for commonly used arrangements of microservices with their associated consumers/providers. Whilst a persistent storage is included with each pattern and is typical of an ideal microservice it does not mandate the need for one as some microservices may not need to hold state.

There are a number of microservice implementation patterns however the focus of this section is around the integration between the microservices and consumers/provider. The purpose is to clarify the options for how they are arranged and highlight areas where data transformation is required and where it should be implemented.

Other microservice implementation patterns include:

Event-Driven Architecture and Event Based Patterns

In an event-driven architecture, applications interact by producing and consuming events. An event is an immutable notification of the change of state of a business entity or user action within an application. One or more applications may subscribe to events of interest. Events are typically communicated via a messaging system. A number of application architecture patterns may be built upon events including:

An event may be transferred between applications using an asynchronous, messaging style of integration following a publish-subscribe pattern. The level of event detail may vary within the message payload. The publishing application is not aware of the consuming applications and the consuming applications are not aware of the publisher. This provides the basis of decoupling between the applications. The messaging system does not provide a long-term persistence of the messages but may provide an optional persistence to facilitate delivery assurance in case of a breakdown in communication. Once a message is consumed by the subscribers the message is typically removed from the messaging system. It is the responsibility of the subscribers to persist and/or perform the necessary action upon receiving the event.

The diagram below illustrates an application publishing an event (or emitting an event) to a topic through a messaging system. One or more applications may subscribe to the topic and receive the event. 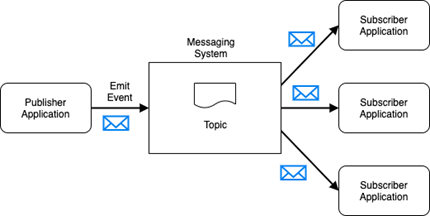 In separating the read and write models CQRS requires a mechanism to provide updates between them. This can be achieved through the use of an asynchronous messaging style of integration following a point-to-point pattern or publish/subscribe pattern. A command may be submitted via a synchronous API style o integration following a request/response pattern to update the write-optimised data store. Alternatively, an event may also be submitted to update an event store. When the data or event store are updated an event is emitted comprising the change details from which a read optimised data store will receive. The read-optimised store will persist the change in a materialised view appropriate for supporting queries. An application may perform a query against the read optimised store using an API style of integration following a request/response pattern. 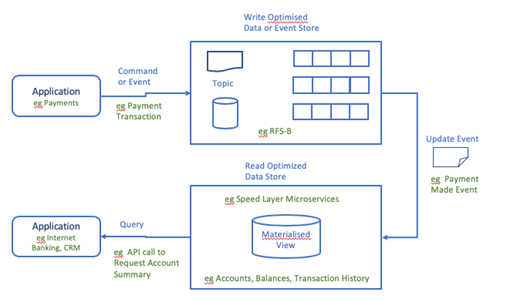 An event sourced system persists a sequence of events rather than repeatedly overwriting a single state. The state is kept in-memory and is updated by events generated as a consequence of processing commands. A command may be submitted via a synchronous API style of integration following the request/response pattern where it is checked if it can be applied. If it can an event is created from which the state is changed. The event is persisted in an event journal and published to a topic using an asynchronous message style of integration following a publish/subscribe pattern from which other subscribers may also receive the event. The in-memory state machine may be recreated through replaying of the event history. Event Sourcing is typically complemented by the CQRS pattern to provide materialised views from the update events. 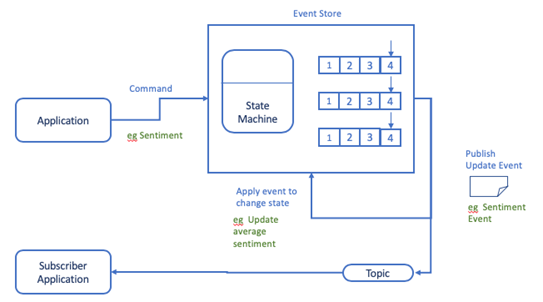 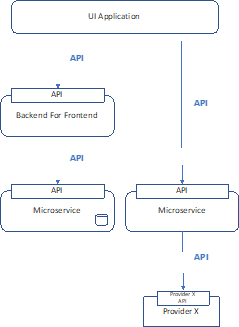 • User is waiting for response (e.g. submitted scheduled payment – you want to know it was successfully scheduled)

• Microservice either retrieves data from its own data store or calls a downstream provider via API call. 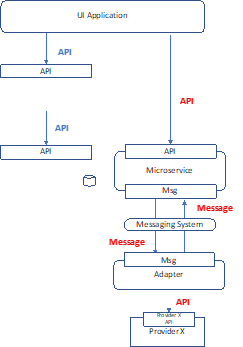 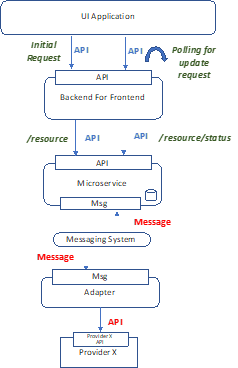 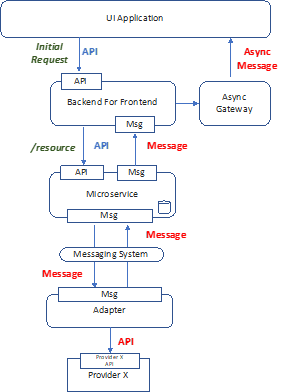 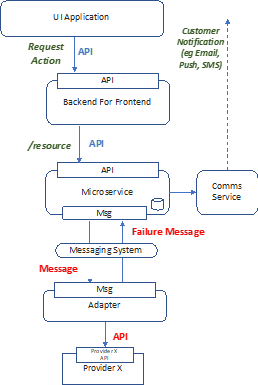 Transactions executed across microservices as part of a long running process can be implemented using the Saga pattern. The Saga pattern relies on each microservice performing a step in the process, updating its own data from which triggers the subsequent step to be completed by another microservice. There are two types of implementations for the Saga pattern: Choreography and Orchestration. 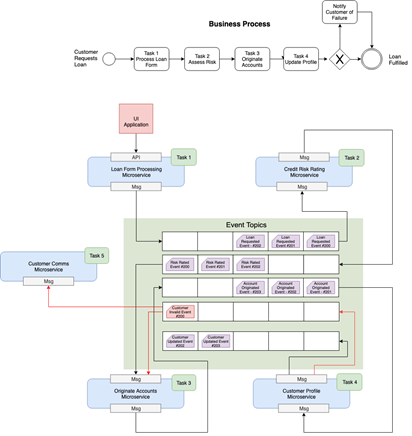 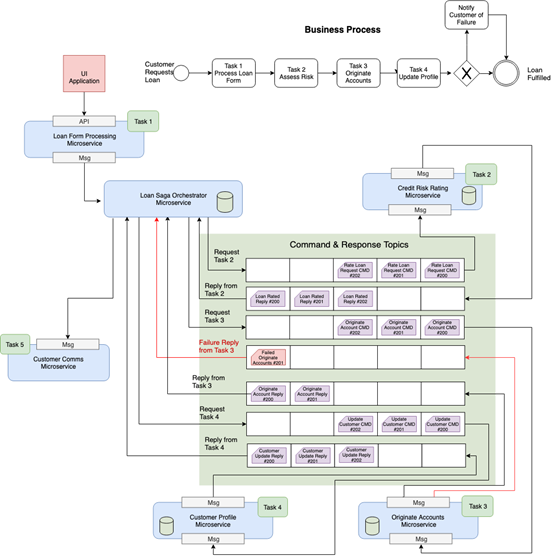