At a glance, IDEs are like apples and oranges, if apples and oranges were the base and home for all your future development work. So let’s set some basic criteria, assuming we’re a Java junior fresh out of programming course diapers. 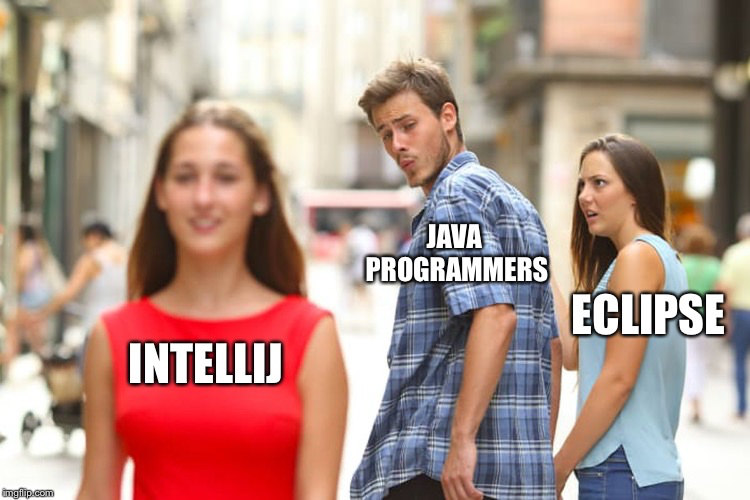 Waiting for a build to finish or for a particularly complex piece of code to compile can be a drag. So unless you like to use this time for other fun activities, you probably want your IDE to be as fast and efficient and possible.

Tests performed show that Eclipse IDE is by far more efficient than IntelliJ IDEA in its memory management. However, if you look at the popular Java forums like r/java/ on Reddit, you may find contradicting arguments.

While we are comparing IDEs for Java development, it makes sense to take a look at what other languages are supported by your IDE of choice.

IntelliJ Community Edition supports Groovy, Java, Kotlin, and XML/XSL straight out of the box. You can download and install plugins to allow you to program in a number of additional languages.

If you require support for HTML/XHTML/CSS, JavaScript, PHP, SQL or others, you will be forced to splurge on an Ultimate edition.

Eclipse is written in Java, so the tools and SDK for Java development are part of the basic installation. However, thanks to it being open source, Eclipse IDE has an ecosystem of plugins that will let you program in pretty much every language and framework out-there in one IDE. Currently, with the plugins available on the Eclipse marketplace, it can support over 100 programming languages and almost 200 application development frameworks.

Currently, the IntelliJ plugins marketplace offers a total of 3,374 plugins, with some of them available exclusively to subscribers to the Ultimate Edition, and the Eclipse marketplace includes 1,668 solutions and extensions for the IDE.

Most developers we’ve asked confirm the opinions on the Internet — IntelliJ IDEA is friendlier to beginners thanks to its ease of code completion and inspection.

It’s worth noting that many developers claim that the ease of use and intelligent coding support offered by IntelliJ is actually a hindrance in learning and understanding the intricacies of Java programming. Then again, some of these developers recommend unassisted coding in a text processor and compilation in the terminal to force newbies to really know what they’re doing before they lean on automation and AI to do some of the work for them.

However, remaining a “purist” will most likely end up leaving you behind the curve. Embracing new trends and best practices will keep you on top of your coding game. Sure, as a beginner you need to learn to crawl before you walk, but what is necessary to “crawl” changes continuously. That’s why Codota‘s AI-based code completions pulls in code snippets from millions of Java programs and delivers code suggestions right in your IDE, Eclipse, or IntelliJ :).

The popularity of one IDE over another should not be your only criteria for choice. However, the size of the community and number of fans among Java developers can have an impact on productivity and ease-of-use.

As previously mentioned, IntelliJ IDEA has had a growing fandom since JetBrains released the Community Edition in 2001 and overtook Eclipse in popularity in 2016. According to stackshare, IntelliJ IDEA now has more fans, more points on Reddit, but far fewer questions on StackOverflow.

The Right Tool for the Job

Though there’s no doubt that IntelliJ IDEA currently has more vocal supporters online and is gradually overtaking Eclipse in popularity among both new and experienced Java developers, our suggestion to the beginner Java developers is to give them both a try and see which feels more like home.

Published at DZone with permission of Eyal Katz. See the original article here.