The attraction of a dedicated physical server is the absolute control it gives you, while with a virtual server it’s the low price. Which should you choose? It all depends on your priorities. First we’ll consider these options in isolation, then compare them, and finally, we’ll show who usually chooses which type of hosting.

Dedicated hosting is a kind of hosting in which you use a separate physical machine. As the owner, you can change the configuration of the computer, install any operating system or software you like, and more. Dedicated servers are usually used by large companies and high-load projects with increased security and control requirements, as well as state institutions who need certified hardware.

The main disadvantage of a physical server is its price, which, as we will show below, is several thousand dollars even for the cheapest option. Another disadvantage is that you need to service a physical server independently, repair it if it becomes faulty, and make sure the hardware is still up to date, since it can quickly become obsolete.

A Virtual Private Server, also called a Virtual Dedicated Server, is basically your own server as well – just virtual. You have a dedicated RAM, processor, and disk and don’t share resources with other users. You have full control over your server, just as if it were physically located on your premises.

This solution costs a few dozen dollars a month and does not require large initial investments of capital. Small companies often use virtual servers for site hosting, software development and testing, and hosting content management systems.

The configuration of the server can be quickly altered to suit changing business tasks. The provider (unless they are a budget provider) constantly invests in hardware, ensuring that it remains up to date. Furthermore, your company doesn’t have an expensive non-core asset on its books, with the periodic investments in repairs and adjustments this would involve. This is all taken care of by the provider.

Rather than acquire servers, some companies (especially smaller ones) often opt instead for cloud services, such as cloud hosting, cloud computing and so on. One one hand, it’s convenient, since the customer receives a turnkey service. On the other hand, the customer has no control over their server: in cloud hosting, physical servers are united in a cluster, and the operator distributes content across several servers and hard disks.

Here's a comparison of each of the options mentioned:

The Experience of Others

We carried out a survey, the results of which we can now share with DZone readers. The survey was conducted among Russian users, who were divided into the following groups:

Question 1: What kind of hosting do you use?

What’s interesting is that 40 percent of those polled responded “I don’t know.” And among small companies and low-load projects, the proportion of those who don’t know exceeds 50 percent. In medium and large companies, this figure falls to 20 percent. 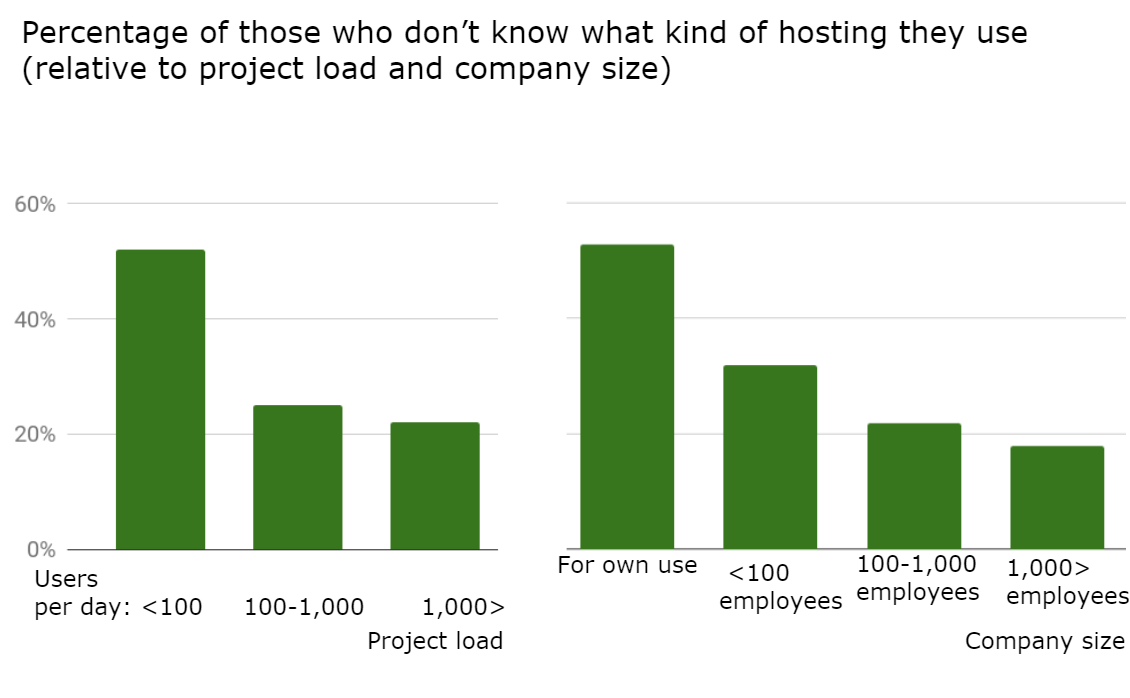 Answers given to the question “What kind of hosting do you use?” by those familiar with different hosting types. This graph shows the distribution of the answers: 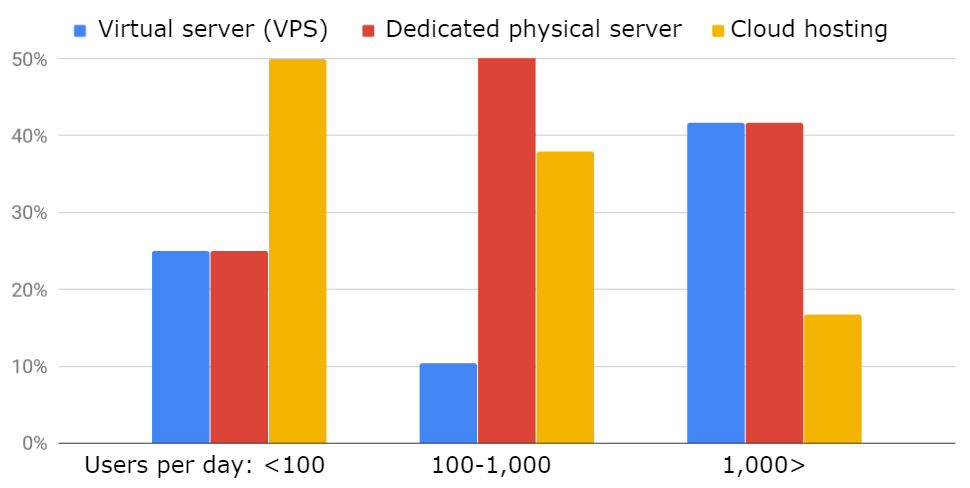 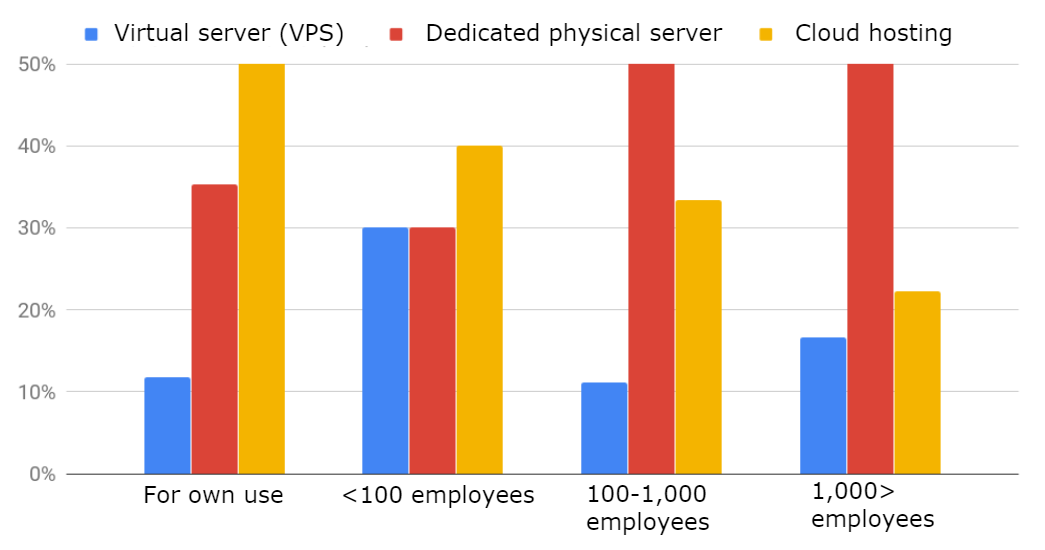 Question 2: What had an influence on your choice of hosting?

The answers were distributed as follows according to priority:

From the answers, we can conclude that:

We prepared another set of questions for specialists.

Question 3: What system virtualization is used on your virtual server? This chart shows the distribution of the answers: 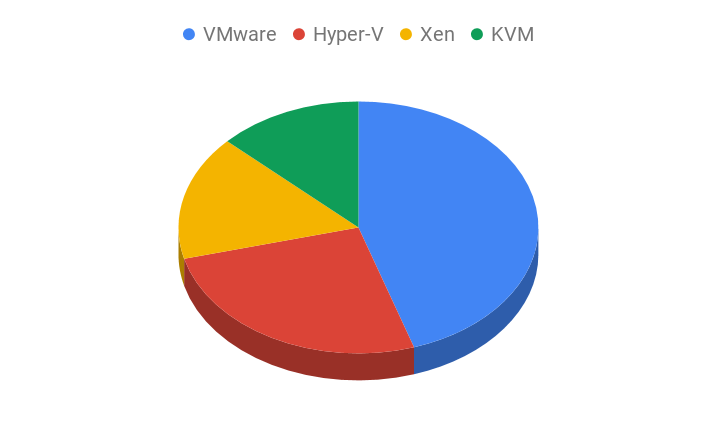 VMware is the undisputed leader, Hyper-V and Xen take second and third place, while KVM is the least popular.

Question 4: What additional services do you use when working with virtual servers?

Here are the top three:

Question 5: What programs and applications do you use on a virtual server?

What influences the price? Primarily it’s the processor, the drive type (a quicker SSD is more expensive than an HDD), and the amount of RAM. Sometimes the country in which the data center is “registered” is a factor, and sometimes the OS affects the price (with Windows, as a rule, it’s pricier).

In the case of VPS, you have the convenient option of making use of the free test period and seeing whether cheaper hardware will cope with your loads – for example, if an HDD isn’t running slowly, there’s no point paying for a more expensive SSD). This helps to choose a configuration that is optimal for price and productivity.

Let’s compare the prices of physical servers and the services of various providers:

The best way to make the right decision on whether to buy a server or rent a VPS is as follows:

If the cost of renting a VPS turns out to be higher than the cost of a server, then it’s worth thinking about buying hardware of your own. However, our practice shows that in more than 80 percent of cases the cost of a server is equivalent to 10-20 years of rent, which makes the purchase of a physical server completely pointless. This is why virtual servers are so popular among small and medium businesses, which have modest loads and limited financial opportunities.

If you have a small company and you need a simple service like site hosting, then it makes sense to use cloud hosting, which avoids the need to pay rent or buy a server.