Join For Free
I often use IntelliJ to run applications, and on occasion things go wrong. For example, a thread that wont terminate can cause a running application to become unstoppable via the IntelliJ UI. Usually when this happens I end up running ps aux | grep java and following up with a kill -9 for each process that looks like it might be the one I'm looking for. On good days there's only a few processes; however, things are more complicated when I have several to look through.

Last week I noticed that the command used to launch the process printed in the Console window, and, more importantly, the idea.launcher.port is part of that command: e.g. idea.launcher.port=7538. Assuming the port is unique, or even almost unique it's much easier to ps aux | grep for than java. 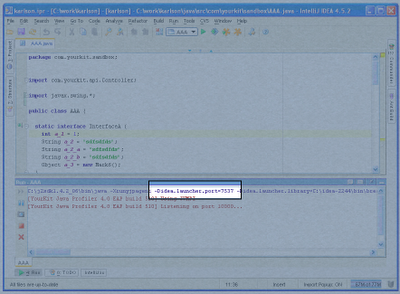