Microservice architecture is one of the most popular software architecture styles that enables the rapid, frequent, and reliable delivery of large, complex applications. There are numerous learning materials on the benefits of microservices, design, and implementations. However, there are very few resources that discuss how to write your code to cloud-native platforms like Kubernetes in a way that just works. In this article, I am going to use the same microservice E-Commerce sample used in the Rethinking Programming: Automated Observability article and discuss Ballerina’s built-in Kubernetes support to extend it to run in Kubernetes platforms.

The sample code covers the implementation of an e-commerce backend that simulates the microservices required to implement searching for goods, adding them to a shopping cart, doing payments, and shipping. 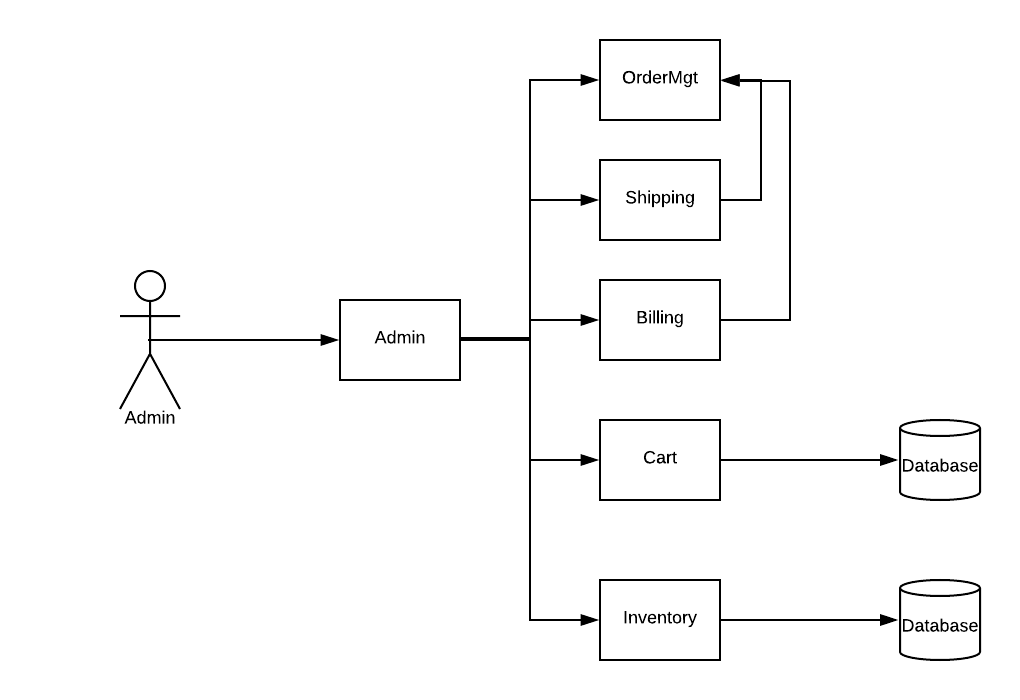 Docker helps to package the application with its dependencies while Kubernetes helps to automate deployment and scaling and to manage containerized applications. Kubernetes defines a set of unique building blocks that collectively provide mechanisms to deploy, maintain, and scale applications.

On the other hand, the developer has to write code in a certain way to work well in a given execution environment. The microservices have to be designed, architected, and implemented in a way that performs well in a platform like Kubernetes. Otherwise, the application code will not be well-fitting to the Kubernetes building blocks. In other words, deployment should not be an afterthought, we should design and write our code to run in Kubernetes.

Let’s look at potential Kubernetes deployment architecture for the above e-commerce application. 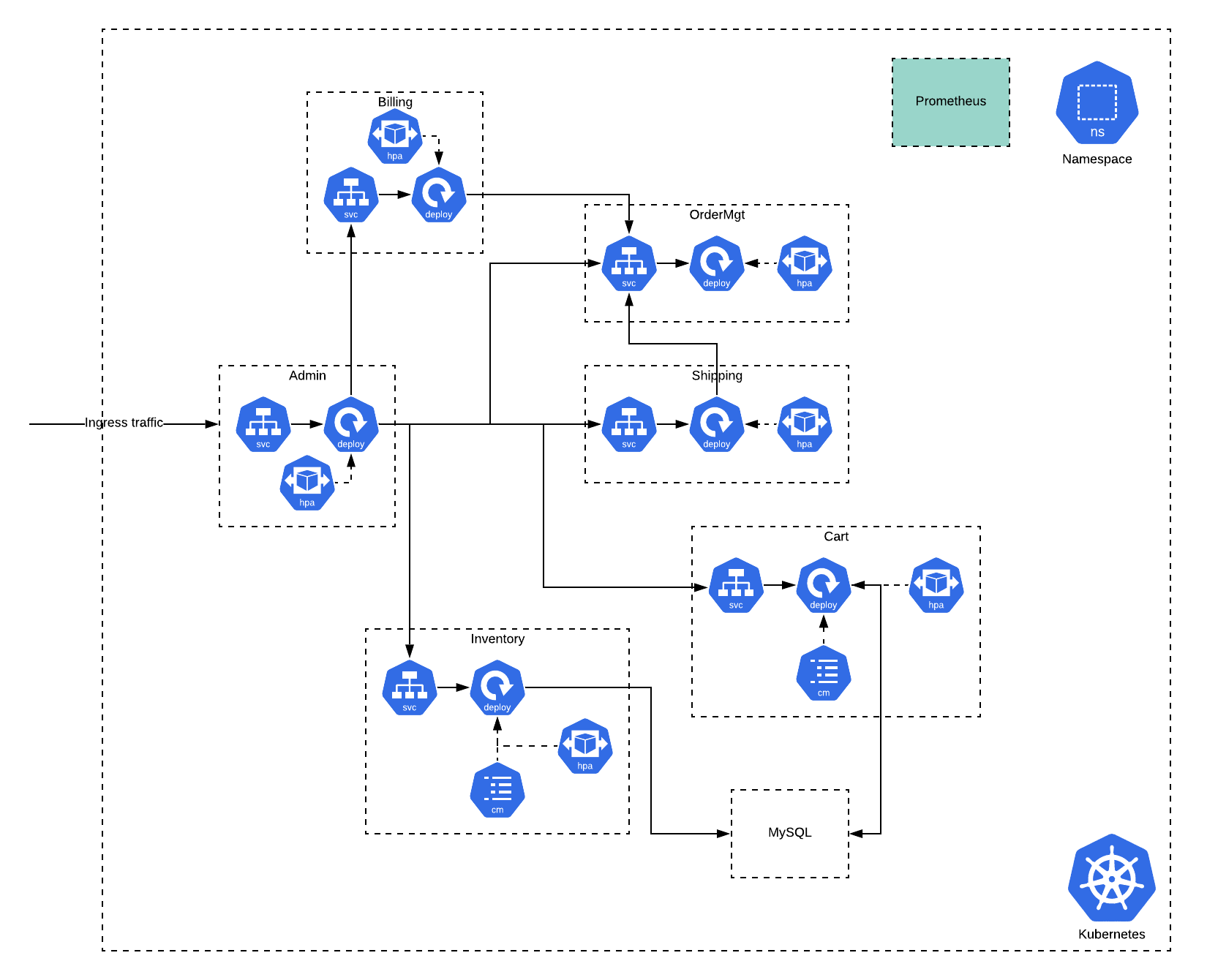 One of the main challenges that developers are facing is the lack of tools and programing language abstraction support to design and implement the microservices to work well in Kubernetes. As a solution to this problem, Ballerina has introduced a set of cloud-native abstractions and tools to write microservices that just work in platforms like Kubernetes.

Let’s look at how we can use Ballerina’s Kubernetes abstraction to extend the e-commerce microservices to run in Kubernetes.

The order management microservice named OrderMgt is the simplest microservices because it provides a set of functionality for billing, shipping, and admins but it is not dependant on any other microservices to complete the tasks. Let’s see how we can extend the OrderMgt microservice to support running in Kubernetes.

In the code snippet above, I have added three Kubernetes annotations on top of the OrderMgt service code block. I have set some properties in @kubernetes:Deployment to extend the code to run in Kubernetes.

The following Dockerfile is created and used to build the corresponding Docker image.

As you can see, the Ballerina compiler read the source code and constructed the Dockerfile to build the image. It has set adequate security by updating and creating groups and copying the application binary with correct permissions. It has also correctly exposed the service ports: 8081 is the orderMgt service port, and 9797 is exposed because we have enabled the observability by setting Prometheus as true. Also, it has correctly constructed CMD as well as all additional parameters required to run properly in the containerized environment.

Docker image is uploaded to the Docker registry

In addition to the Docker image, the compiler has generated the Kubernetes artifacts based on the annotation we defined.

You can see that the generated deployment YAML consists of some properties we have set in the annotations and the rest will be correctly populated by reading the source code combined with the meaningful defaults.

In the @kubernetes:Service annotation, I have set the service name ordermgt-svc. Other microservices can access the OrderMgt microservices by using this Kubernetes service with the defined service name. The Kubernetes service will be act as an internal load balancer with the default clusterIP type, where it’s only available to the internal network by blocking all external traffic to it.

In addition to the ordermgt-svc Kubernetes service, the compiler has generated ordermgt-svc-prometheus because we have set prometheus: true. This generated service name can be used to set up Prometheus to pull the observability stats. Prometheus setup will be discussed in the latter part of this article.

One of the main benefits of microservice architecture is that individual services can be scaled independently. We can configure our microservices deployment to automatically scale depending on the load running on the service. Kubernetes Horizontal Pod Autoscaler (HPA) is the way to do it. Our @kubernetes:HPA annotation will correctly generate the required HPA YAML to run in Kubernetes.

In addition to the Docker image and Kubernetes YAMLs, the compiler has generated HELM charts, if someone wants to run using HELM.

Two kubectl commands are also printed and just a copy and paste will work with the configured Kubernetes cluster. The Kubernetes cluster can run locally or in a public cloud-like Google GKE, Azure AKS, or Amazon EKS.

Like the OrderMgt microservice, we have set the following annotations in the shipping and billing microservices.

You can find the full source code of the shipping and billing microservices here. In addition to annotations, we have used the ordermgt-svc name and port as the URL in the orderMgtClient config.

When you build these modules, the compiler will generate all Kubernetes and Docker artifacts corresponding to these two services.

The MySQL database username and password set in ballerina.conf resides in the corresponding module directory. In the Kubernetes world, these config files can be passed into PODs by using Kubernetes ConfgiMaps. We have set corresponding configMap annotations in both the Cart (as seen below) and the Inventory microservices code.

When you compile the Cart module you can see the following line in the generated Dockerfile.

You can see that it’s passing --b7a.config.file=${CONFIG_FILE} to read the config file that comes from the config map in addition to other properties required.

The compiler generates the following Kubernetes configMap along with the other Kubernetes artifacts.

Also, the generated Kubernetes deployment YAML for the Cart microservice has been updated by adding the corresponding configMap along with the volume mounting instruction properties.

The Admin microservices connect all the other five microservices and expose the admin functionality to the administration actor. All other microservices communicate via their corresponding Kubernetes service name that we have defined in the annotations.

The Admin microservice needs to open to the external network while all the other microservices only allow local traffic. This is achieved by setting the correct serviceType in the @kubernetes:Service annotation.

When compiling the source code, it generates a Kubernetes service with the nodePort type which allows access to the admin microservice by using the Node IP and the port defined in the annotation. If you are running the Kubernetes cluster in a cloud provider you can set it as LoadBalancer type. Then it will generate the corresponding cloud load balancer config to expose admin services.

Running in a Kubernetes Cluster

Now that we have looked at how we can extend the e-commerce microservices to generate the required artifacts to run well in Kubernetes by using Ballerina’s built-in Kubernetes support. Let’s test the deployment.

Clone the Git repo and run the following command to compile the source code.

This will generate all necessary artifacts to run in Kubernetes.

You can use the compiler output command to deploy all the microservices.

Step 4: Set up Prometheus and Grafana

Note: I have configured prometheus.yml to pull stats from all six microservices by using Kubernetes service names generated from the compiler.

You can access the Grafana dashboard at http://localhost:32000/ (if you deployed in a cloud provider cluster, use the external node IP and the 32000 port). 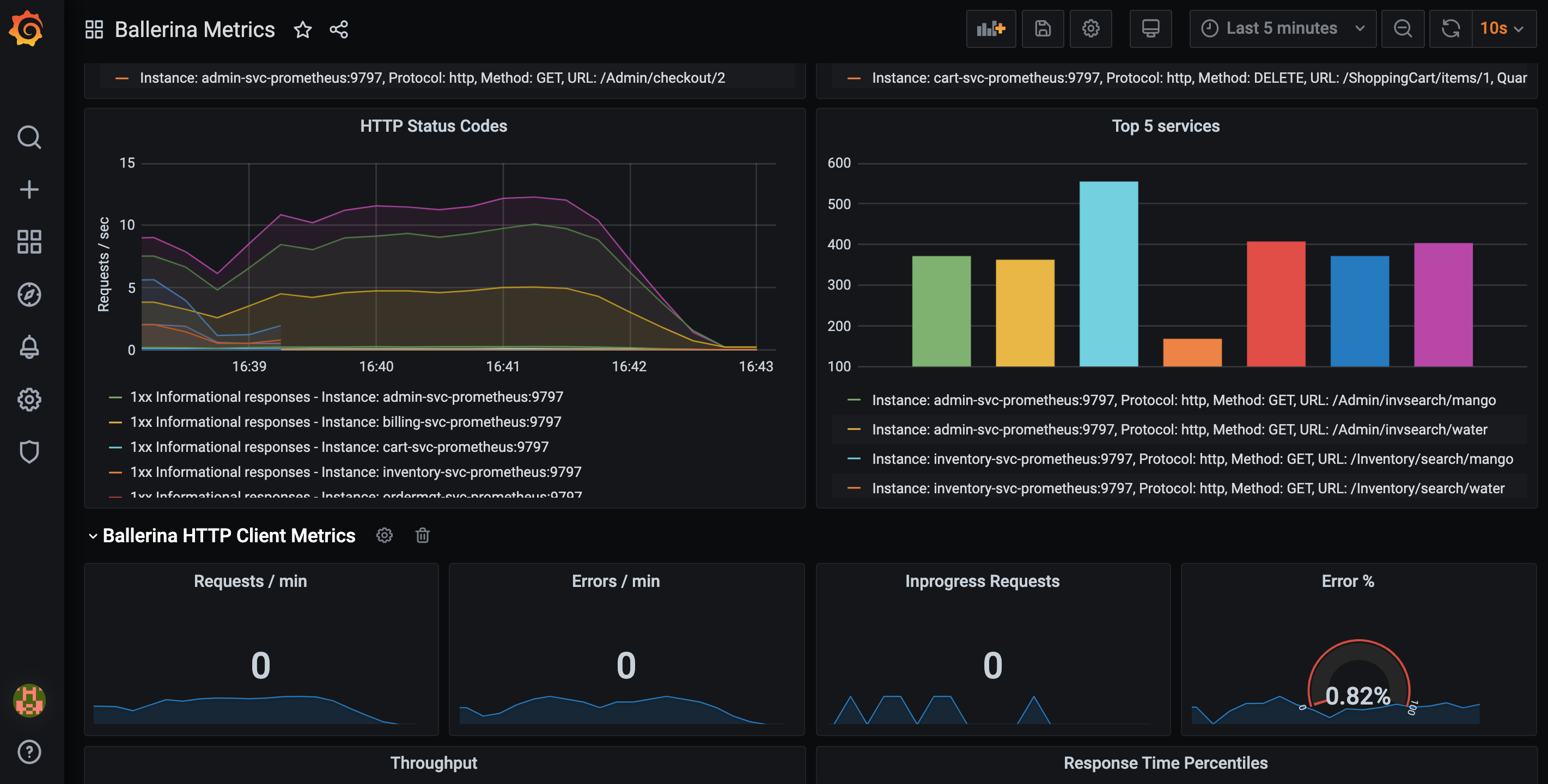 Here, I have not set up Jaeger, but if you setup Jaeger you will be able to see tracing stats that are collected from the deployed microservices.

To get the real benefits out of microservice architecture, cloud-native deployment is important in addition to the microservice application code implementations. But one of the common mistakes seen in many projects is not considering the deployment aspect while developing the application. One reason for this is the lack of tools and abstractions support in traditional programming languages that allow developers to write code that just works in these cloud-native platforms.

Ballerina is a new programming language that fills these gaps by providing a rich set of language abstraction and a unique developer experience when integrating cloud-native platforms. This ultimately leads to improved productivity of the whole microservice development life cycle.