This article is an excerpt from the book Transformers for Natural Language Processing, Second Edition. This edition includes working with GPT-3 engines, more use cases, such as casual language analysis and computer vision tasks, and an introduction to OpenAI's Codex.

Have a look at the following sentence:

Though the customer seemed unhappy, she was, in fact, satisfied but thinking of something else at the time, which gave a false impression.

But is that true?

Labeling this sentence “neutral” bothered me. I was curious to see if OpenAI GPT-3 could do better. After all, GPT-3 is a foundation model that can theoretically do many things it wasn’t trained for.

When I read the sentence closely, I could see that the customer is she. When I looked deeper, I understood that she is in fact satisfied. I decided not to try models blindly until I reached one that works. Trying one model after the other is not productive.

I needed to get to the root of the problem using logic and experimentation. I didn’t want to rely on an algorithm that would find the reason automatically. Sometimes we need to use our neurons!

Could the problem be that it is difficult to identify she as the customer for a machine? Let’s ask AllenNLP’s SRL BERT.

I first ran She was satisfied using the Semantic Role Labeling interface on https://demo.allennlp.org/.

The result was correct: 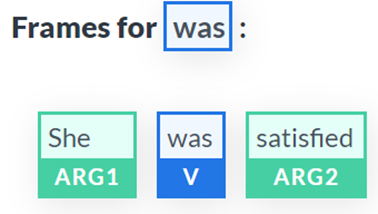 The analysis is clear in the frame of this predicate: was is the verb, She is ARG1, and satisfied is ARG2.

We should find the same analysis in a complex sentence, and we do:

Satisfied is still ARG2, so the problem might not be there.

Now, the focus is on ARGM-ADV, which modifies was as well. The word false is quite misleading because ARGM-ADV is relative to ARG2, which contains thinking.

The thinking predicate gave a false impression, but thinking is not identified as a predicate in this complex sentence. Could it be that she was is an unidentified ellipsis?

We can quickly verify that by entering the full sentence without an ellipsis:

Though the customer seemed unhappy, she was, in fact, satisfied but she was thinking of something else at the time, which gave a false impression.

The problem with SRL was the ellipsis again. We now have five correct predicates with five accurate frames.

Frame 1 shows that unhappy is correctly related to seemed:

Frame 2 shows that satisfied is now separated from the sentence and individually identified as an argument of was in a complex sentence:

Now, let’s go straight to the predicate containing thinking, which is the verb we wanted BERT SRL to analyze correctly. Now that we suppressed the ellipsis and repeated she was in the sentence, the output is correct: 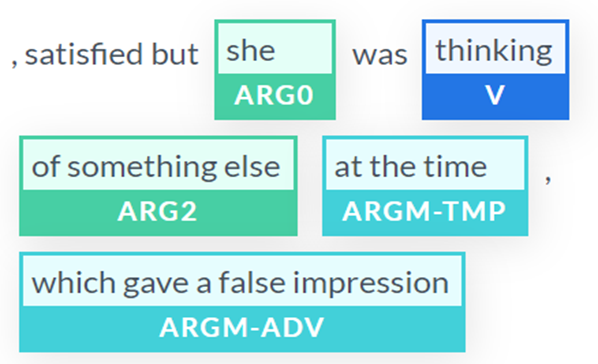 Now, we can leave our SRL investigation with two clues:

Before we go to GPT-3, let’s go back to Hugging Face with our clues.

We will investigate our two clues (the ellipsis of she was and the presence of false in a positive sentence.

The Ellipsis of She Was

We will first submit a full sentence with no ellipsis:

Though the customer seemed unhappy, she was, in fact, satisfied but she was thinking of something else at the time, which gave a false impression 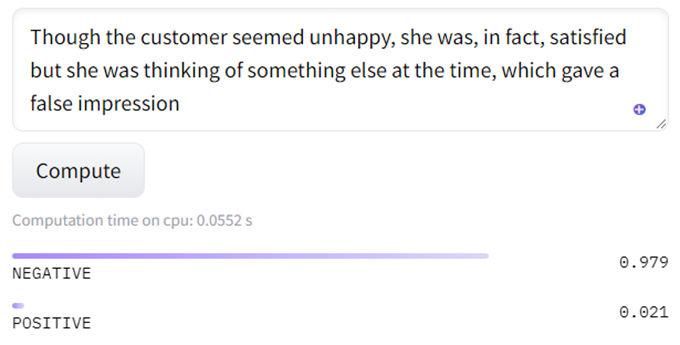 The Presence of False in an Otherwise Positive Sentence

We will now take false out of the sentence but leave the ellipsis:

Though the customer seemed unhappy, she was, in fact, satisfied but thinking of something else at the time, which gave an impression

Bingo! The output is positive: 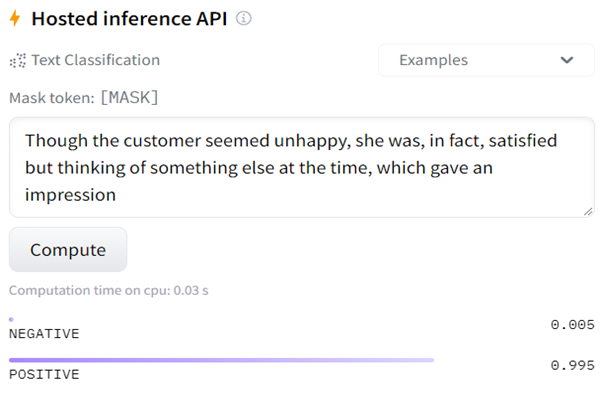 Investigating With the GPT-3 Playground

Let’s use OpenAI’s example of an Advanced tweet classifier and modify it to satisfy our investigation in three steps:

Step 1: Showing GPT-3 What we Expect

Sentence: “The customer was satisfied”

Sentence: “The customer was not satisfied”

Sentence: “The service was good”

Sentence: “This is the link to the review”

Step 2: Showing it a Few Examples of the Output Format We Expect

Step 3: Entering Our Sentence Among Others (Number 3):

3. “Though the customer seemed unhappy, she was, in fact, satisfied but thinking of something else at the time, which gave a false impression”

4. “The support team was lovely”

The output seems satisfactory since our sentence is positive (number 3). Is this result reliable? We could run the example here several times. But let’s go down to the code level to find out.

We just click on View code in the playground, copy it, and paste it into a notebook. We add a line to only print what we want to see:

The output is not stable, as we can see in the following responses.

This leads us to the conclusions of our investigation:

The conclusions of the job positions of developers in the present and future are:

Published at DZone with permission of Denis Rothman. See the original article here.